O Prophet, Why should you forbid (yourself) what God has made lawful for you, in order to please your wives? 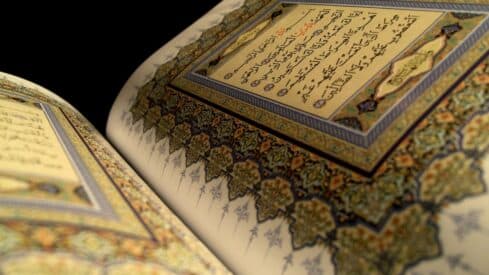 The most correct of what was mentioned about the reason for the revelation of this verse from the beginning of Surah Al-Tahrim, as narrated by Muslim, is that he, may God’s blessings and peace be upon him, used to drink honey with some of his women – Zaynab bint Jahsh – and he stayed with her for a long time. So, some of the got jealous, because they are also human, and wished he stays with them as He stays there; Because from his habit – may God bless him and grant him peace – that he used to walk around them all every day, asks about them and fulfills their needs, then staying overnight with the woman in the shift, then some of the wives said: If the Prophet reached us, we will say to him: There is an unpleasant smell in your mouth – and he hates the bad smell, so they said He had that, and he mentioned that it was from the food that he ate, so he said: “I ate honey.” So they said: Perhaps its bees sucked the acanthus flower which had an unpleasant odor.

Hence, the Messenger swore not to eat it again, and indeed when he visited someone who had honey he refused to eat from it. Allah, the almighty has revealed to His prophet what some of his wives did and explained the way out from his oath which is expiation by freeing a slave or feeding ten needies, or providing clothes for them as it is in Surat Al-Maida.

This verse was revealed as gentle reproach from God to his Prophet that he was at the peak of good intercourse with his wives, to the extent that he abstained from what God had permitted for him I order to bring happiness to their hearts and made it clear to him that the transcendence of behavior does not reach the level in which he exhausts himself and deprives her of the permissible that he loves. Abstaining from eating something to please the one loves is not a legal prohibition of something that God has permitted and not a sin, rather it is a personal behavior in the treatment of his wives, as he abstained from eating garlic and onions, and they are permissible, because his status from meeting angels and others is not the same as the situation of other people, and before him the prophet (Ya’qub) Jacob refrained the meat and milk of camels for reason personal to him, and Allah did not reproach him for that, as the Almighty said: (All food was permitted for the children of Israel, except for what Israel forbade itself from before the Torah was revealed).

The aforementioned reason for the revelation of the verse is more correct than the narration of al-Daraqutni, that he abstained from Mariya to satisfy Hafsa when he confided in her at her home.