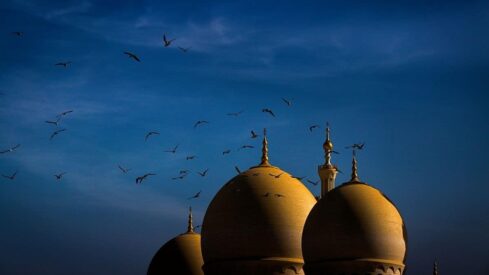 The Arabic term riya’ is roughly translated as “showing off,” whichmeans doing something to please others or to gain their approval and admiration, instead of focusing on receiving God’s approval, satisfaction, and pleasure. Riya’ is the opposite of the Arabic term ikhlas [purity of intention].

According to Islam, riya’ could make a pure act of worship, such as prayer, void of any reward and could even result in God’s punishment.

The Qur’an mentions this when describing the lazy state of the hypocrites as they go to prayer, dragging their feet, only so that people can see them performing prayers:

[Surely the hypocrites strive to deceive Allah, and He shall requite their deceit to them, and when they stand up to prayer they stand up sluggishly; they do it only to be seen of men and do not remember Allah save a little.] (An-Nisaa’4:142)

[O you who believe! do not make your charity worthless by reproach and injury, like him who spends his property to be seen of men and does not believe in Allah and the last day; so his parable is as the parable of a smooth rock with earth upon it, then a heavy rain falls upon it, so it leaves it bare; they shall not be able to gain anything of what they have earned; and Allah does not guide the unbelieving people.] (Al-Baqarah 2:264)

This means that if the intention is not sincerely to please God, then the reward for charity could be washed away just like rain washes away soil off a smooth rock, thus stopping any chance of plantation on it.

Once Prophet Muhammad (peace and blessings be upon him) was describing some of the signs of the Day of Judgment, one of which was the false messiah. Then he said that there was something he feared more than the false messiah, which was “hidden polytheism.” Hidden polytheism is due to actions which are done for the purpose of showing off, like a person who lengthens his prayer so that people see him (As-Suyuti).

Mentioning the attitude of riya’ and how ridiculous and pompous those who have it are, the Muslim scholar Ibn Al-Jawzi related a story in one of his books. Once a man was praying in what appeared to be a devoted manner, so people praised him and commented on how righteous and sincere he was. On hearing them the man felt so proud that while he was praying he turned to them and informed them that he was also fasting.

When people are seen performing a good deed, they often cannot but feel good if they are praised for it. Islam does not consider this to be riya’, as long as the person originally intended the deed for the sake of God, without wanting to be praised by people. A person must also have the feeling of humbleness and thankfulness to God that He helped him or her perform this good deed.

This means that if a person intends to secretly do a good deed without anybody knowing and by chance somebody sees him or her, then he or she gets a double reward: one for doing a good deed and another for not feeling vain. This was mentioned when the Prophet was asked his opinion about a person who had done a good deed and then people had praised him for it. So he said, “It is glad tidings for a believer (which he has received in this mortal world)” (Muslim).

Sometimes people may have a sincere intention to do good, but due to uncontrollable or unexpected circumstances, they may not be able to fulfill this act. According to Islam, although this action was not actually done, they are still rewarded for it due to their sincere intention.

This was clear when the Prophet was leaving Madinah on one of his campaigns and some people asked him to accommodate them so they could go with him. However, the Prophet did not have the means to accommodate them all, so they were left behind. After leaving Madinah, the Prophet said that there were some men who were left behind but who were still with them though they were not physically present. Prophet Muhammad said that wherever they would go or whatever they would do, these people would share the same reward as those who were able to join him. This was due to their sincere intentions and because they were detained because of a legitimate excuse. This story was mentioned in the Qur’an:

[Nor unto those whom, when they came to thee (asking) that thou shouldst mount them, thou didst tell: I cannot find whereon to mount you. They turned back with eyes flowing with tears, for sorrow that they could not find the means to spend.] (At-Tawbah 9:92)

God’s pleasure is not achieved only by peoples’ efforts; they also need God’s generosity and grace in order to receive His divine reward. God’s generosity is assured by the Prophet, who said,

Improving the Quality of Ikhlas

The first step to improve the quality of ikhlas is to make sure that your action is not prohibited by God. For example, a person cannot drink wine or rob a bank and say that he or she is doing it with a good intention. According to Islam, ends do not justify means; if a person has a noble objective then his or her intentions must also be noble.

Second is being conscious of God by realizing that God is present at all times and that He is aware of all your inner thoughts and motives. The Qur’an refers to this by saying what means:

[Say: “Whether ye hide what is in your hearts or reveal it, Allah knows it all: He knows what is in the heavens, and what is on earth. And Allah has power over all things.] (Aal `Imran 3:29)

Third is to develop the habit of giving some thought to any action before actually doing it. This includes, for example, seeking God’s approval and pleasure when giving charity and not intending to impress people by it. The Qur’an makes reference to this by saying what means:

Similarly, it is wrong for a person to seek knowledge with the intention of showing off, as the Prophetic saying clarifies that it is only the person who seeks knowledge to please God and to achieve his or her mission on earth who gets rewarded (As-Suyuti). In particular, people engaged in religious education should remember Prophet Muhammad’s warning about people who appear to be pious but at the same time have insincere intentions (Muslim).