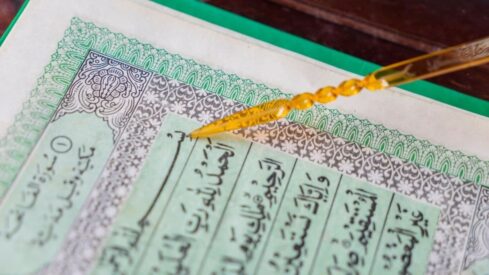 In the summer of 1980 I was studying Eastern religions as part of my Master’s degree. I had been learning about Islam off and on for four years, since I met my first Muslim. I had read the Qur’an and observed the Friday prayer. But I wasn’t ready to commit myself to Islam.

Ramadan came in July that year. Three brothers rented a small house in our small town to use as a mosque during Ramadan. I knew the brothers as fellow students, and occasionally I dropped by the tiny house. I wasn’t ready to be a Muslim yet, but I was curious.

The night of July 31st was hot and humid. I couldn’t sleep. First I did some reading about Confucianism. One of my assignments. I still couldn’t sleep. Then, still lying in my bed, I tried to pray. Suddenly it hit me, like the proverbial lightening bolt. I couldn’t pray. I wasn’t clean.

I had been told about wudu’ [ablution]. It seemed silly and unnecessary to me. Why would someone have to perform a cleansing ritual simply to pray?

As I got up from my bed and went to the bathroom, I wished I had paid closer attention. I made wudu’ as well as I could remember. Then I prayed, in the manner I had since childhood, with my head bowed and my hands folded. I don’t remember exactly what I said, but I know it was a fervent wish to be guided.

Later, still not able to sleep, I sat down and wrote a letter to my minister. In the letter, I told him that I would probably have to become a Muslim.

I knew the brothers woke up early to prepare for the fast. I walked the quiet streets and arrived at the tiny mosque at around 4 a.m. They finished their sahur [ meal before fasting] and made salatul Fajr [dawn prayer]. Then they asked me why I had come. I showed them the letter.

There were shouts of “takbir” [means saying “Allah is Greatest”]. They told me how to make a proper wudu’, step by step, then one of the brothers, Adel, gave me the shahadah. I could barely say it, I was so nervous.

A few hours later, I finally slept. In the afternoon I took a long walk around campus, wondering what I had done. I decided to give it a year. I could always change my mind, couldn’t I?

The brothers told me I wouldn’t have to fast every day. I fasted four days that first year, out of the ten days remaining in Ramadan. It was August, hot, and long days, but somehow I made it.

The following Ramadan, my first full Ramadan, I rented a house with two other sisters. We made sahur together every morning and ate iftar [meal to break the fast] together in the evenings. We prayed. I stayed up most of the night praying. I was between jobs and schools, and not yet married. It was the most peaceful, most beautiful Ramadan of my life.

Every year, the mosque becomes more and more crowded during the last ten days of Ramadan. But my special days start on the night of the nineteenth. The day I became a Muslim.