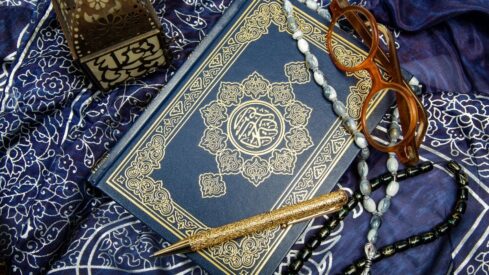 The first time I ever thought about having Islam as my religion was at the age of 15. Reading a story in my high school religion book about a Swedish woman who converted made me think: How would it be if I became a Muslim? How would it change my life?

This woman was wearing a scarf on her head, and she was working as a secretary. Because of my lack of knowledge about Islam, this shocked me extremely. How can she work with that thing on her head? Who will ever hire a woman like that?

My conclusion was that I would never become Muslim because it would stand out and would lessen my chances of getting the dream job. I guess this thinking depended largely on the way I was raised. My parents are honest and hard-working people, but they do not see the need for religion. They see that the meaning of life is actually inside life itself, and after it when we all become dust, there is nothing more to it.

Nevertheless, I guess my mother respected the traditions and morals of our Protestant Christian church, so she sent me at an early age to a children’s group, and later at the age of 14, I was asked if I would like to go to confirmation classes.

I agreed. I thought that it was best to do it. Who knew, maybe I would change my mind later and regret that I did not go, and then I would be outside of the church. Also, it was fun to go to these classes. We painted, sang songs, played theatre, and went to a camp. There was not a lot of serious people among us – most came only because of tradition, and to get gifts, jewelry and money from relatives on that great day when the classes finally finished and there was a ceremony in the church.

From this time, I remember having strong doubts about Christianity. I read the Bible but it did not give me what I needed. I knew there was something I was looking for, but I did not know what. I learned about astrology and tried meditation and so on, but all this made me feel even more confused.

I started to keep a “spiritual journal”. It was a small book, which I filled with different material, religious and non-religious. I would collect biblical verses, poems, Hindu chants, songs, and anything that had meaning to me.

I started secondary school at the age of 16. Living in a small suburb outside of the city, I was required to transfer to a school inside the big town. I chose the one which was supposed to have the highest status. I could not imagine that there would be so many foreign people.

Immediately after I started, I felt I was not happy. I wanted to change my major, so I transferred from Media to Languages and came to a new class where I knew no one. The first people who spoke kindly to me and became my friends were an African girl, and an Iraqi girl who was wearing a scarf. It was so exotic to me! All my life I had been surrounded by people of my own background, and now I got a taste of other cultures and life styles.

I was so fascinated by the Iraqi girl that I started to hang around a lot with her and also became friends with her friends. I became famous as the Swedish person who had no Swedish friends. It was more of a cool thing to me – I felt I needed to distance myself from the normal crowd.

The Muslims of my school sometimes had active discussions about Islam and that impressed me very much. I thought, how can it be that this religion is such an active part of their lives? It is not like Christianity, it is alive not dead! And it has an impact on everything in their lives.

One day when I went with my father to a second hand market, I looked for some books and found an old translation of the Qur’an in the Swedish language. I decided to buy it for historical purposes, and to gain a greater understanding of my friends’ religion.

By now, I started to add Islamic items to my journal. I was writing the opening Surat Al-Fatiha, and its translation. I also memorized it. I had no motive behind doing so, I was just interested in it.

With little time, I was totally absorbed in the Qur’an. I felt like I had found a real treasure. There was something drawing me to it – something not logical, especially since this translation which I had, was written by an Orientalist and contained a number of serious faults. The worst thing of all was that the author pointed to supposed faults in the order in which the verses came. He said that it was evident that some verses should change place. Alhamdulillah (praise be to Allah) that I learned the truth by asking my friend.

I went to my Iraqi friend, and told her that I was interested in Islam. She became very shocked and felt a need to sit down or else she would pass out! After the shock settled, she decided to take me to an Islamic organization and there I got some books, pamphlets and the phone number of another Swedish woman who had become Muslim.

I was afraid of what my family would say, and indeed my mother became outraged when I told her that I wanted to become a Muslim. The whole family searched my room and threw away my Islamic books. They said that Islam was like a cult and that I was brainwashed.

But this did not stop me. In the month of July 2001, I declared my shahada (testimony of faith) openly. I had called the Swedish woman who’s phone number I had been given, and she arranged Islamic lessons in her home. I went to her villa, which had a garden, and we prayed the zhuhr (forenoon) prayer there in the open air. For me this was a symbolical act, because in my society it is something not appreciated to show acts of worship openly. I felt so free and could care less about what other people would think.

It was with a loud and proud voice by which I said the words which undoubtedly has had the strongest impact on my entire life:

I bear witness that there is no deity worthy of worship save Allah;

And I bear witness that Muhammad is the messenger of Allah.

No other single sentence has influenced me as this one has.