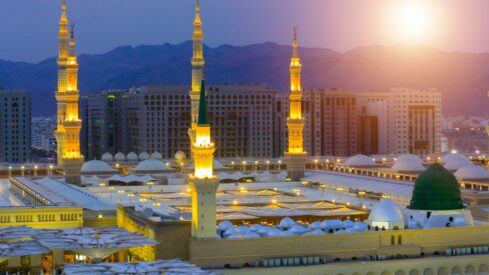 Prophet Muhammad (peace and blessings be upon him) was a compassionate man, full of love and understanding. He took an interest in the physical and spiritual problems of his friends, relatives, and all those around him, and he took all appropriate measures to ensure their health, security, and happiness. He took them under his wing and always bore in mind their lot in the hereafter by encouraging them to remain godly. These features of the Prophet, which are examples for all of humanity, are referred to in the Qur’an:

[A Messenger has come to you from among yourselves. Your  suffering is distressing to him; he is deeply concerned for you; he is gentle and merciful to the believers.](At-Tawbah 9:128)

Since the Companions of the Prophet took him as a model, they made the appropriate sacrifices as mentioned in the Qur’an, behaving with empathy and compassion toward one another. A verse speaks of the sacrifices the faithful made for the sake of one another:

[Those [the Ansar, Muslims of Madinah] who were already settled in the abode, and in belief, before they [the Muhajirun; immigrants from Makkah to Madinah] came, love those who migrated to them and do not find in their hearts any need for what they [the immigrants] have been given and prefer them to themselves, even if they themselves are needy. It is the people who are safeguarded from the avarice of their own selves who are successful.] (Al-Hashr 59:9)

The faithful, who were taught by the Prophet and abided by the verses of the Qur’an, behaved thoughtfully even toward prisoners of war. The Qur’an tackles this point:

(They give food, despite their love for it, to the poor and orphans and captives (saying): “We feed you only out of desire for the Face of Allah. We do not want any repayment from you or any thanks. Truly We fear from our Lord a glowering, calamitous Day.) (Al-Insan: 8-10)

The Prophet reminded his Companions to be merciful, and he was the greatest model for them in this regard:

“Those who show mercy will receive the mercy of the Most Merciful. Have mercy on those who are on earth, so that the One in heavens will have mercy on you.” (At-Tirmidhi)

Out of that affection and thoughtfulness he felt toward the faithful, the Prophet asked Allah to forgive their mistakes. Mind Allah’s instructions to the Prophet on this subject in the following verses:

[And ask Allah to forgive them (Muslim women). Verily, Allah is Ever-Forgiving, Most Merciful.] (Al-Mumtahana 60:12)

[Know then that there is no true god except Allah and ask forgiveness for your wrongdoing, and for the men and women who believe.] (Muhammad 57:19)

[If they ask your permission to attend to their own affairs, give permission to any of them you please, and ask Allah’s forgiveness for them. Allah is Ever-Forgiving, Most Merciful.] (An-Nur 24:62)

In another verse, Allah tells the Prophet to pray for the faithful:

[Pray for them. Your prayers bring relief to them. Allah is All-Hearing, All-Knowing.] (At-Tawbah: 103)

As this verse reveals, the Prophet’s prayers would bring the faithful peace and tranquility. It must not be forgotten that only Allah grants peace of mind and tranquility to the heart. Allah makes the prayers of His Messenger, whom He has appointed as guardian and protector of the faithful, a means whereby they come by comfort and ease. Our Lord’s love and compassion and His protection and mercy for the faithful are most clearly represented in the morality of the Prophet.