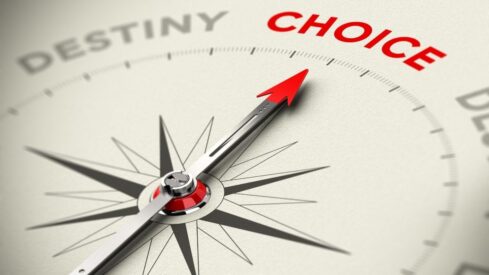 A person’s life in this world is not stable. One passes through alternating periods of happiness and dismay, strength and weakness, wealth and poverty, health and sickness, etc. True believers are those who maintain a clear level of faith throughout the worldly fluctuations. They continue to remember Allah and ascribe the bounties to Him, and they turns to Him in submission, asking for relief from their affliction. This is described by the Messenger (peace and blessings be upon him), who said the following:

Indeed amazing are the affairs of a believer! They are all for his benefit. If he is granted ease of living he is thankful; and this is best for him. And if he is afflicted with a hardship, he perseveres; and this is best or him. (Muslim)

And Allah says the following:

[Certainly, We shall test you with fear, hunger, loss of wealth, lives and fruits; but give glad tidings to the patient—those who, when afflicted with calamity say, “Truly to Allah we belong, and truly to Him shall we return.” It is those who will be awarded blessings and mercy from their Lord; and it is those who are the guided ones.] (Al-Baqarah 2:155–157)

Thus, believers show gratitude and thankfulness for all the wonderful blessings that Allah grants them. And they display patience and submission during sickness, hardships, hunger, or other afflictions.

Abu Hurairah (may Allah be pleased with him) reported these words of the Prophet:

Hardships continue to befall a believing man and woman in their body, family, and property, until they meet Allah burdened with no sins. (At-Tirmidhi)

Abu Hurairah reported that the Prophet said this:

Whenever Allah wills good for a person, He subjects him to adversity. (Al-Bukhari and others)

Abu Hurairah and Ka`b ibn Malik reported these words of the Prophet:

The parable of a believer is that of a fresh and moist plant; the wind tilts it this way and that way; and so is the believer; he continues to be subject to affliction. And the parable of a hypocrite is that of a firm cedar tree; it does not shake — until it is uprooted all at once. (Al-Bukhari and Muslim)

The prophets and righteous people are afflicted the most, and their rewards are the highest. Sa`d reported that the Prophet said this:

Anas reported these words of the Prophet:

Anas reported that the Prophet said this:

One should not look to sickness as a gloomy episode, but should remember the great good in it. It is one form of affliction with which Allah tests His servants, giving them a chance to acquire rewards.

8. Removal of Sins and Elevation in Ranks

Abu Hurairah reported these words of the Prophet”

Whenever a Muslim is afflicted by harm from sickness or other matters, Allah will drop his sins because of that, like a tree drops its leaves. (Al-Bukhari and Muslim)

Abu Sa`id Al-Khudri reported that the Prophet said this:

A Muslim is not afflicted by hardship, sickness, sadness, worry, harm, or depression — even if pricked by a thorn — but Allah expiates his sins because of that. (Al-Bukhari and Muslim)

Sa`id said, “I was with Salman (may Allah be pleased with him) when he visited a sick man in Kindah (in Persia), and he said to him, ‘Expect good because Allah makes a believer’s sickness an expiation (for his sins) and a period of rest. However, when a disbeliever falls sick, he is like a camel whose owner ties it then lets it loose—it does not understand why it was tied nor why it was freed'” (Al-Bukhari).

`A’ishah (may Allah be pleased with her) narrated that once some pain afflicted the Prophet, causing him to suffer and turn about in his bed. She said, “Had one of us done this, you would have blamed him.” He (peace and blessings be upon him) replied with these words:

An ailment is intensified for the righteous. Whenever a believer is afflicted by a hardship, whether it is a thorn or more, a sin is taken off from him because of it, and he is elevated by one rank (in Paradise). (Ahmad)

Usually, when believers fall sick, they are not able to do the same amount of good (prayer, fasting, helping Muslims, etc.) that they used to do when they were well. But Allah, out of His great mercy, continues to record for them the good deeds that they were forced to stop because of their sickness. Abu Musa Al-Ash`ari narrated these words of the Prophet:

For a traveling or sick person, his deeds will be recorded in accordance with what he used to do when he was resident or well. (Al-Bukhari)

Abdullah ibn Amr reported this from the Prophet:

No (believing) person gets sick, but (his deeds) will be recorded for him in accordance with what he used to do when he was well. (Al-Bukhari)

Anas reported that the Prophet said the following:

No Muslim body is afflicted by Allah, but He will record (his deeds) for him in accordance with what he used to do when he was well — as long as he is sick. Thus, if He takes his life, He forgives him; and if He cures him, He washes him (from sins). (Al-Bukhari)

Reason for the Reward

The scholars have differed in opinion as to whether the sick will be rewarded for the sickness itself or for being patient during it. The correct opinion is that if they are patient and submit to Allah’s will, as in the above hadith, they would be rewarded for both the submission and the sickness; otherwise, they would not be rewarded at all because they resented Allah’s decree. This is what should be understood from Ibn Hajar Al-`Asqalani’s words: “The authentic hadiths are clear in that the rewards are recorded once affliction strikes a Muslim. As for patience and acceptance, they are virtues for which a person may get additional rewards over those for the affliction.”