The birth of the immigrant 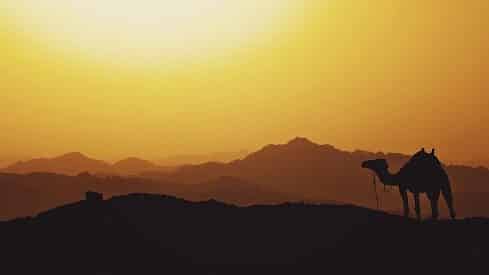 The story of the immigrant in the beginning of Islam is the story of getting rid of the plankton of place and interests, and the conquest of heaven over the earth, when the goal is to remove the slave from the darkness of polytheism to the light of monotheism. immigration was the test of faith for what the Muhammadan message required in terms of sacrificial preparations, and the departure of fleeting enjoyment.

The Arab man lived resistant to every change or renewal, firmly adhering to the customs and traditions of his tribe. The natural environment fostered a narrow view of life, and the aspiration to ideals beyond the Bedouin values. The Arab mentality was a mixture of individuality and protection for the entity of the tribe, and the deposits of fathers and ancestors. It is true that there is a kind of discrepancy due to the different places, especially between metropolitan residents and Bedouins, but the general situation was an expression of deep concern about instability, which made the individual feel that there was no one to help or protect him, so his anger turned into a harmful belief (* ) .

On a night that the Arab remembers well, the Prophet, may God’s blessings and peace be upon him , descended from the cave of Hira to announce the message of monotheism, and to call his people to reject idols and freedom from all slavery that is not worthy of what God has granted them in terms of honor. During the thirteen years of the jihad of the call in Mecca, an entire generation was prepared to be the subject of Islam, and the elite that bore the burden of commissioning and the mission.

The first mission that the Prophet, may God bless him and grant him peace, addressed was to spread the energy of faith in the souls of the first generation of Muslims, and to free them from fear and anxiety, and loyalty to stones that do not harm or benefit. It is known that when faith touches the heart, it causes a tremendous upheaval in feelings and behavior, and provides the person with a strong impetus in proportion to the movement of the new life. So when the series of clamping down on the da’wah began, Muslims revealed the fruit of sound faith, and tested their patience, steadfastness and pride in the many harming stations that culminated with the call to emigrate.

The first building blocks of the migration were the first confrontation with family and relatives, especially those who belonged to ancient Makkan families. During that confrontation, the Muslim was freed from the extreme influence of ties of kinship at the expense of his belief, especially as he saw how the hearts of those who, until recently, were a source of sympathy and tenderness, had changed.

Othman Affan, may God be pleased with him, refused to renounce his religion, so his uncle imprisoned him and swore not to break his bond. In another report, he used to wrap him in a palm leaf mat and smoke it underneath it.

When Umm Musab bin Umair heared the news of his conversion to Islam, she locked him up and forbade him to eat and drink. Then his condition changes after the bliss of living, and his skin becomes scarred, as in some narrations.

As for slaves, their masters diversified in their torture. The desert of Makkah witnessed heartbreaking colors of disregard for human dignity. All that and the souls are satisfied and steadfast in the faith and sincerity of the followers.

The general atmosphere was characterized by a state of material and moral injustice. In addition to physical abuse, the Quraish masters desperately confronted every approach to the sound of the message, and prevent a person from his personal freedom in the comparison between what Muhammad, may God bless him and grant him peace, brought and what he inherited from his ancestors from naive paganism. Some of them broadcasted the characteristic of insanity in order to distract people during the Hajj season from listening to the Qur’an, and some of them bought the female slaves of singers, and authorized them to occupy everyone who had thought about Islam with the futile discourse. Al-Nadr bin Al-Harith sat down to narrate the news of the kings of Persia, claiming that it was a better hadith than Muhammad, may God bless him and grant him peace.

Despite the colors of persecution, there was an area of ​​expectation, and waiting for endurance and patience to result in the formation of a collective conviction that Islam is better than disbelief, or at least for Mecca to expand the space for freedom of belief without coercion or restriction. However, the three-year-old boycott incident, punctuated by the painful images of starvation and siege, will confirm the impossibility of coexistence, and reinforce the tendency to break ties with the place, in support of the religion of God, and pushing for sedition among the polytheists.

When the divine order was issued to emigrate to Yathrib, the reasons for cutting all the ties that the Arab had until recently paid his soul as a sacrifice for were completed: the family, the tribe, the clan, the idol, and everything related to the pre-Islamic zeal. A unique model emerged for the immigrant in his religion. He does not accept compromise, nor does his resolve under pressure or duress soften. Therefore, the immigration exam was a very important culmination of Muhammadiyah education, and in that the owner of “Al-roheeq Al Makhtoom” says: “ The meaning of immigration was nothing but wasting interests, sacrificing money, and saving the person only, with the notice that he is a looted, who may perish at the beginning or the end of the path, and that he is walking Towards an ambiguous future, who does not know what troubles and sorrows will result from it ”.

The clearest example of the birth of the immigrant is the story of Abu Salamah, who was at the forefront of the immigrants before the Great Aqaba, as Ibn Ishaq said. When he decided to go out, his in-laws said to him: This is yourself, you have overcome it, have you seen this friend of ours? Of what reason should we let you walk her out of the country? So they took his wife from him. And when the news reached his family, they said: We do not leave our son with her, as they took her away from him, so they dragged the little boy among them until they dislocated his arm and took him away. Abu Salamah went alone to Medina.

The immigrants’ delegations continued on a journey that changed the course of history, and Yathrib became the House of Security and Faith, and a criterion of the second group, the Ansar group, which will test the following events for the sincerity of its fulfillment of the charters of the two pledges. The history will witness the birth of Al-Ansari, who sheltered, assisted and offered to his brother in religion to share with him the family and money.

Migration was a decisive starting point for all the subsequent achievements. It provided sound proof that building the individual is the cornerstone of every movement aimed at the goodness of society and the building of civilization. All the triumphant flags that subjugated the world to the tolerance and justice of Islam, failed the hearts that were raised in the Mohammedan cloak. Our present will continue to be burdened with questions of rising and breaking away from the bondage of dependency, unless a sincere invitation to emigrate is raised again.