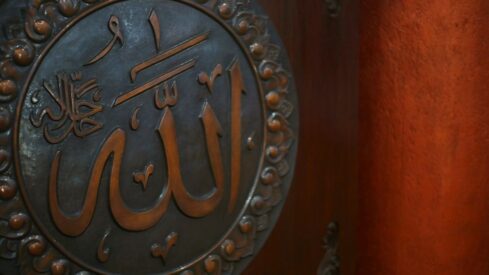 When Prophet Muhammad (peace and blessings be upon him) was nearly 40, he had been wont to pass long hours in retirement meditating and speculating over all aspects of creation around him.

This meditative temperament helped to widen the mental gap between him and his compatriots. He used to provide himself with simple food and water and then directly head for a cave named Hira’, in the Mount An-Nur. It was only 2 miles from Makkah, a small cave 4 yards long and 1.75 yard wide. He would always go there and invite wayfarers to share his modest provision. He used to devote most of his time, and Ramadan in particular, to worship and meditation on the universe around him. His heart was restless about the moral evils and idolatry that were rampant among his people; he was as yet helpless because no definite course, or specific approach had been available for him to follow and rectify the ill practices around him. This solitude attended with this sort of contemplative approach must be understood in its divine perspective. It was a preliminary stage to the period of grave responsibilities that he was to shoulder very soon.

Privacy and detachment from the impurities of life were two indispensable prerequisites for the Prophet’s soul to come into close communion with the Unseen Power that lies behind all aspects of existence in this infinite universe. It was a rich period of privacy which lasted for three years and ushered in a new era, of indissoluble contact with that Power.

When he was 40, the age of complete perfection at which prophets were always ordered to disclose their message, signs of his prophethood started to appear and twinkle on the horizons of life; they were the true visions he used to experience for 6 months. In Ramadan, in his third year of solitude in the cave of Hira’, Allah desired His mercy to flow on earth and Muhammad was honored with prophethood, and the light of revelation burst upon him with some verses of the Qur’an.

As for the exact date, careful investigation into circumstantial evidence and relevant clues point directly to Monday, Ramadan 21 at night, that is, August 10, 610 CE, with Prophet Muhammad exactly 40 years, 6 months and 12 days of age, that is, 39 Gregorian years, 3 months and 22 days.

Forerunners of the Revelation assumed the form of true visions that would strikingly come true all the time. After that, solitude became dear to him and he would go to the cave, Hira’, to engage in devotion there for a certain number of nights before returning to his family, and then he would return for provisions for a similar stay. At length, unexpectedly, the Truth (the angel) came to him and said, “Recite.” “I cannot recite,” he (Muhammad) said. The Prophet described: “Then he took me and squeezed me vehemently and then let me go and repeated the order ‘Recite.’ ‘I cannot recite’ said I, and once again he squeezed me and let me till I was exhausted. Then he said, ‘Recite.’ I said, ‘I cannot recite.’ He squeezed me for a third time and then let me go and said [the first revelation]:

(Read! In the name of your Lord, Who has created (all that exists), has created man from a clot (a piece of thick coagulated blood). Read! and your Lord is the Most Generous.) (Al-`Alaq 96:1-3)

The Prophet repeated these verses. He was trembling with fear. At this stage, he came back to his wife, Khadijah, and said, “Cover me, cover me.” They covered him until he restored security. He apprised Khadijah of the incident of the cave and added that he was horrified. His wife tried to soothe him and reassured him saying, “Allah will never disgrace you. You keep good relations with your kith and kin; you bear the burden of the weak; you help the poor and the needy, you serve your guests generously and assist the deserving calamity-afflicted ones.”

She set out with the Prophet to her cousin Waraqah ibn Nawfal, who had embraced Christianity in the pre-Islamic period, and used to write the Bible in Hebrew. He was a blind old man.

Khadijah said, “My cousin! Listen to your nephew!”

Waraqah said, “O my nephew! What did you see?”

The Prophet told him what had happened to him. Waraqah replied, “This is the angel who is entrusted with Divine Secrets that Allah sent to Moses. I wish I were younger. I wish I could live up to the time when your people would turn you out.”

Muhammad asked, “Will they drive me out?”

Waraqah answered in the affirmative and said, “Anyone who came with something similar to what you have brought was treated with hostility; and if I should be alive till that day, then I would support you strongly.” But after a few days Waraqah died.