The Importance of Being Active 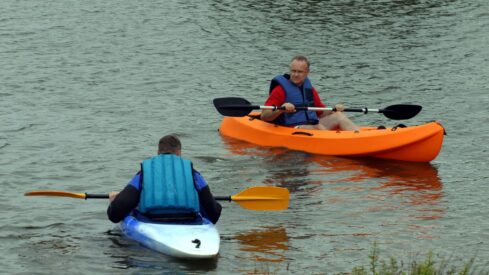 Playing sports is a much better alternative to movies and television! When we play sport we are strengthening our bodies and relaxing our minds as well as mixing with friends and having a good time. So that is four good things at one time! A quiet game of tennis with a friend, a football game with a group, a quiet walk in the park with a good friend, swimming, basketball, volleyball…the list goes on and on. But don’t get carried away and forget your Islamic obligations; don’t forget the One who gave you that healthy body and the ability to play and have fun. Without Allah’s mercy and bounty on us, we would have nothing! Also don’t forget your family. In other words, put everything in its proper perspective.

So this summer vacation is an opportunity to help yourself, your family, and your friends. If you have younger brothers and sisters, take them out. If you don’t, suggest to your friend who has younger brothers and sisters that you and he/she should take them out! Spend time with them and get to know them. Teach them some skills like throwing and catching; run some races with them. Build up a relationship with them so you can help and guide them in their lives. They may be young now but time passes quickly and before you know it they’ll be teenagers like you and then you’ll understand how they feel and advise them correctly inshaa Allah.

Be active. Go and visit your grandparents, go out with your mother, help your family to fix something, buy something or go somewhere. Use your imagination.

But as you’re romping around the tennis court, football field or wherever it is you are, remember to protect your eyes, and I am not talking about wearing sunglasses. I’m talking about lowering your gaze.

This sin is so hateful in the sight of Our Lord, that He commanded us to not even go near it and illicit affairs begin with a lustful glance. Such a glance leads to lustful talk and flirting, then meeting…and we are all aware of what comes next.

So you have a number of challenges facing you this summer. Lowering your gaze is just one of them. Don’t let satan win. He wants to destroy you and remove your happiness and turn it into misery. Don’t listen to his whisperings. Seek refuge with Allah and trust in Him.

[O you who believe! Do not follow Satan’s footsteps: if any will follow the footsteps of Satan, he will command what is shameful and wrong] (An-Nur, 24: 21).

Looking at another man or woman in an indecent manner is following in Satan’s footsteps.

The Prophet further explained the idea of keeping chaste. he said, “…the adultery of the eyes is looking (at [that] which is not allowed)…” (Bukhari, Muslim).

So when you are taking out those younger kids or playing sport with your friends try to go to the park or the football ground or whatever at a quiet time when not many people are there. After all, the intention is to exercise, be with your friends and have some fun, right?

At the same time, lowering your gaze doesn’t mean being rude or anti-social. You should go out, have fun, and even make Dawa (inviting others to Islam). A Muslim is decent and pure and this means all of his or her body must be decent and pure. A natural consequence of this is lowering the gaze.

The Prophet (peace and blessings be upon him) commands us saying: “Teach your children swimming, archery and horse-riding.” So we know it is really important to play sports and doing so trains the Muslims and makes their bodies healthy and sound. “A sound mind is in a sound body.”

In a Hadith, we read: “A strong believer is better and more beloved to Allah than a weak one.” (Muslim) A sound strong body is capable of fulfilling both the religious and the worldly duties.

But don’t be a bad sport. Islam stresses the importance of spiritual and moral training and these things should accompany playing sport so that everyone gets along together well and goes home feeling satisfied and happy, not disturbed and upset.

In contests, a true Muslim never forgets the etiquette of treating his opponent well. If we cast aside morals in contests and competitions this is a form of hypocrisy. May Allah protect us from that.

Here are some tips for when you play sport.

•             Don’t become so preoccupied that you neglect your religious and other duties.

•             Don’t use foul words or behave badly and don’t slander other people. If you play sport but lose your good deeds, you’ve really lost the target!

•             Don’t play games that involve both sexes as this opens the way for temptation and corruption. May Allah protect us.

May Allah bless our activities and keep us all on His straight path.