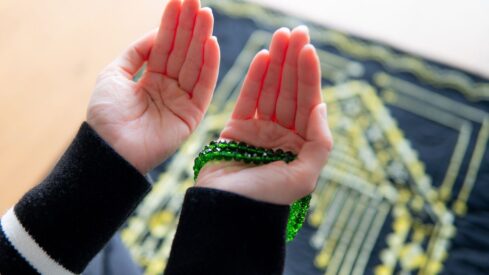 A good human model should be someone who is in constant remembrance of his Lord and is rightly guided by His divine revelation and guidance.

Those who are heedless and astray should by no means be followed or taken for good exemplars:

{Nor obey him whose heart We have permitted to neglect the remembrance of Us, one who follows his own desires, whose case has gone beyond all bounds.} (18: 28)

Remembrance of God breeds intimacy with Him and provides man with spiritual enhancement; therefore, it should be constantly observed:

{O you who believe celebrate the praise of Allah, and do this often. And glorify Him morning and evening.

He it is Who sends Blessings on you, as do His angels, that He may bring you out from the depths of Darkness into Light; and He is Full of Mercy to the Believers.

From the many ways to remember God is to call out Allah’s Name, saying: “Allah, Allah…”

To glorify Him, saying: “Subhana Allah” (Glory is to God)

To praise Him, saying: “Alhamdu lillah” (Praise is to God)

To testify to His Oneness, saying: “la ilaha illallah” (There is no god but Allah).

What is important here is not the words and utterances in themselves but rather the meanings and intentions thereof; therefore, such words as “Glory is to Allah”, “Praise is to Allah”, “There is no god but Allah” and “Allah is Greatest”, as afore-mentioned, are “the things that endure of good deeds”, which Allah mentions in His words:

{Wealth and sons are adornment of the life of this world; but the things that endure of good deeds, are best in the sight of your Lord, as rewards, and best as (the foundation for) hopes.} (18: 46)

When God explicitly describes the above-mentioned supplications of glorification, praise, monotheism, and magnification as being the things that endure of good deeds, He implicitly describes adornment of this present life as being ephemeral and perishable.

In other words, this present life – as the Prophet (peace be upon him) confirms – is a temporary provision for both the pious and libertine. Moreover, the perishable vanities might well be conducive to man’s misery and perdition if they divert him from the remembrance of his Lord. To this purport, the Quranic verse goes:

{O you who believe! Let neither your riches nor your children divert you from the remembrance of Allah. If any (of you) act thus, the loss is their own.} (63: 9)

Another kind of remembrance is to beseech Allah for forgiveness:

{Ask forgiveness from your Lord; for He is Oft-Forgiving. He will send rain to you in abundance, give you increase in wealth and sons, and bestow on you gardens and bestow on you rivers (of flowing water).} (71: 10-2)

Also, to remember God is to invoke Him, for invocation is the essence of worship:

{When My slaves ask you concerning Me, (tell them that) I am indeed close (to them); I listen to the prayer of every supplicant when he calls upon Me; let them also, with a will, listen to My call, and believe in Me; that they may be rightly guided.‏} (Al-Baqarah 2: 186)

To remember God is to remember His bidding and forbidding, His good promise and threat, His Paradise and Hell, and His laws and legislations.

To remember God is to remember the good righteous deeds of those upon whom God has bestowed His grace: Prophets, believers, martyrs, and righteous people, and to keep away from those whose portion is Allah’s Wrath, who go astray and cause others to go astray, in order that your worship may be acceptable.

Another kind of remembrance is to remember Allah’s Quranic verses:

Readers of the Quran never grieve; and those who learn the Holy Quran, Allah will let them enjoy healthy sober minds until they die.

{Soon will We show them Our Signs in the (furthest) regions (of the earth), and in their own selves, until it becomes manifest to them that this is the Truth. Is it not enough that your Lord does witness all things?} (41:53)

Another kind of remembrance is to remember God’s acts and cosmic Signs:

{We will, without doubt, help Our Messengers and those who believe, (both) in this world’s life and on the Day when the Witnesses will stand forth.} (40: 51)

Another way to remember Allah is to remind people of their Lord, to call for Him, making people aware of His Existence, Perfection, and Oneness, to teach them His Book, which guides people to the Right Path, to tell them about His Messenger, peace be upon him, as well as the Prophetic Tradition and biography, addressing their minds and hearts at the same time, and to be a good model for them. God says:

{A similar (favor have you already received) in that We have sent among you a Messenger of your own, showing you Our Signs, purifying you, and instructing you in Scripture, Wisdom and in new Knowledge.} (2: 151)

Thus, as you have been guided to Allah, strive to seek after guiding people to Him. Strive to be a rightly guided and guiding man. Strive to be a righteous reformer. This is the greatest kind of remembering Him. It is the work of prophets, messengers, true believers, monotheists, and sincere laborious scholars, who are the foremost in faith and will be the foremost in the gardens of eternal bliss in the Hereafter.

Imam An-Nawawi, may Allah have mercy on him, extended the meaning of remembering Allah, saying:

“It should be known that the virtue of remembering Allah is not confined to extolling Glories and Praises of Allah, Most Gracious, bearing witness to His Oneness, or the like. Nay, rather, everyone who obeys Allah is someone who Remembers Him.

In other words all acts of obedience reflect remembrance of Allah, Lord of all worlds.”

Share Share
# Islam # belief # Supplication # Tawheed # Remembrance of Allah
Read more in this series: "Your way to a Happy Life"