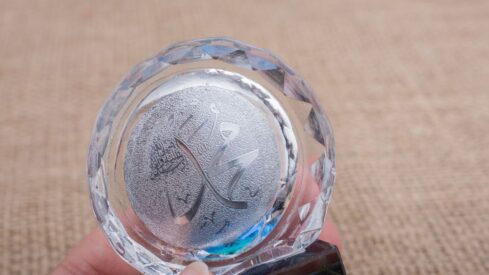 Prophet Muhammad was an extraordinary husband, a perfect father, and a unique grandfather. He was unique in every way. He treated his children and grandchildren with great compassion, and never neglected to direct them to the straight path and to good deeds.

He loved them and treated them tenderly, but did not allow them to neglect matters related to the afterlife. He showed them how to lead a humane life, and never allowed them to neglect their religious duties or to become spoiled. His ultimate goal was to prepare them for the hereafter. His perfect balance in such matters is another dimension of his divinely inspired intellect.

Anas ibn Malik, the Prophet’s servant for 10 continuous years, says, “I have never seen a man who was more compassionate to his family members than Muhammad.” (Muslim) If this admission were made just by us, it could be dismissed as unimportant. However, millions of people, so benign and compassionate that they would not even offend an ant, declare that he embraced everything with compassion.

He was a human like us, but God inspired in him such an intimate affection for every living thing that he could establish a connection with all of them. As a result, he was full of extraordinary affection toward his family members and others.

All of the Prophet’s sons died. Ibrahim, his last son, died in infancy. The Prophet often visited his son before the latter’s death, although the  Prophet was very busy. Ibrahim was looked after by a nurse. The Prophet would kiss and play with him before returning home. (Muslim) When Ibrahim took his last breaths, the eyes of the Prophet started shedding tears.

Become a fan of the Sharia Zone

`Abdur-Rahman ibn `Awf said, “O Allah’s Messenger, even you (weep)!” The Prophet said, “O Ibn `Auf, this is mercy.” Then he wept more and said, “The eyes shed tears and the heart grieves, and we will not say except what pleases our Lord, O Ibrahim ! Indeed we are grieved by your separation.” (Al-Bukhari)

The Messenger of Allah was completely balanced in the way he brought up his children. He loved his children and grandchildren very much, and instilled love in them. However, he never let his love for them be abused. None of them deliberately dared to do anything wrong. If they made an unintentional mistake, the Messenger’s protection prevented them from going even slightly astray.

He did this by wrapping them in love and an aura of dignity. For example, once Hasan or Husain wanted to eat a date that had been given to be distributed among the poor as alms. The Messenger immediately took it from his hand, and said, “Anything given as alms is forbidden to us.” (Ibn Hanbal, Muslim) In teaching them while they were young to be sensitive to forbidden acts, he established an important principle of education.

Whenever he returned to Madinah, he would carry children on his mount. On such occasions, the Messenger of Allah embraced not only his grandchildren but also those in his house and those nearby. He conquered their hearts through his compassion. He loved all children.

He loved his granddaughter Umamah. He often went out with her on his shoulders, and even placed her on his shoulders while praying. When he prostrated, he put her down; when he had finished praying, he placed her on his back again. (Muslim) He showed this degree of love to Umamah to teach his male followers how to treat girls. This was a vital necessity; only a decade earlier, it had been the social norm to bury infant or young girls alive. Such public paternal affection for a granddaughter had never been seen before in Arabia.

The Messenger proclaimed that Islam allows no discrimination between son and daughter. How could there be? One is Muhammad, the other is Khadijah; one is Adam, the other is Eve; one is ‘Ali, the other is Fatima. For every great man there is a great woman.

Fatimah wept and groaned when the Prophet told her that he would die soon.As soon as Fatimah, the daughter of the Messenger of Allah, entered the room where the Prophet was, he would stand, take her hands, and make her sit where he was sitting. He would ask about her health and family, show his paternal love for her, and compliment her.

Fatimah, knowing how fond he was of her, loved him more than her own self. Her great mission was to be the seed for godly people. She always watched her father and how he called people to Islam. She wept and groaned when the Prophet told her that he would die soon, and rejoiced when he told her that she would be the first family member to follow him. (Al-Bukhari and Muslim) Her father loved her, and she loved her father.