The Prophet’s Compassion for Children 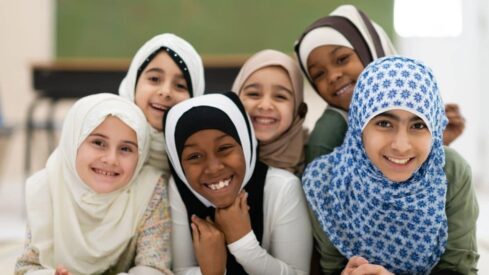 Children are a great blessing from Allah. With their tender hearts, children can be moulded into righteous people only with a positive and tender approach. Islam considers children to be an amanah (trust) given to the family and says it is fard (obligatory) for the family to raise a child in a righteous manner. One should not favour one child over another. In Islam, both male and female children should be treated equally and should be loved and cherished. The children have certain rights over their parents; it is the family’s obligation to shelter, feed, clothe, educate, support, nurture, and love them.

In today’s world many parents are so immersed in worldly life that they forget to pay attention to their children. Many parents think that providing financial support for their child is enough. The fact is, financial support alone doesn’t fulfil a parent’s duty towards their child. One can only win a child’s heart through love and a gentle attitude. It is the child’s right to be loved and cherished.

I remember that, as a child, I yearned for the attention of my family, but being in a joint family—my family and my uncle’s family lived together and a few other cousins stayed with us as their parents were working abroad—did not give me the opportunity to experience the kind of attention I expected. My parents felt that they should not express their love for their children in front of others, as people might think they were favouring us. As a child (and even now), I heard people saying “We need not to express our love to prove that it is there, it is enough to have a loving heart.” But the fact is that only when one expresses love to a child will the child feel more confident and stronger. Children have the capacity to easily distinguish when there is a difference in the attitude of the adults. Whether an adult shows or does not show love will have a significant impact on a child. Hence, we adults have to be conscious with our behaviour in the child’s presence and be constantly aware of the emotions we project to our children.

Nowadays, we see people have become hard-hearted so that their attitude towards children is unpleasant. There are some who show much partiality toward one gender, and there are some who don’t treat others’ children with the same kindness or affection which they show to their own children. It is common to see even people who claim that they act on the Qur’an and Sunnah showing less interest in playing with their children or giving them the due attention or expression of love.

The Prophet (peace and blessings be upon him) is the model for the whole of humankind. His attitude towards children was always compassionate and merciful. Being fond of children, Prophet Muhammad showed great interest in playing with them. His involvement in children’s games shows us the great importance in playing with our children. He would have fun with the children who had come back from Abyssinia and tried to speak in Abyssinian with them. It was his practice to give lifts on his camel to children when he returned from journeys.

Prophet Muhammad never held back his love for the children and always expressed his fondness to them. In one hadith Abu Hurairah (may Allah be pleased with him) narrated:

I went along with Allah’s Messenger (peace and blessings be upon him) at a time during the day but he did not talk to me and I did not talk to him until he reached the market of Banu Qainuqa`. He came back to the tent of Fatimah and said, “Is the little chap (meaning Al-Hasan) there?” We were under the impression that his mother had detained him in order to bathe him and dress him and garland him with sweet garland. Not much time had passed that he (Al-Hasan) came running until both of them embraced each other, thereupon Allah’s Messenger (peace and blessings be upon him) said, “O Allah, I love him; love him and love one who loves him.” (Muslim)

Anas ibn Malik (may Allah be pleased with him), the servant of the Prophet, had another recollection:

I never saw anyone who was more compassionate towards children than Allah’s Messenger (peace and blessings be upon him). His son Ibrahim was in the care of a wet nurse in the hills around Madinah. He would go there, and we would go with him, and he would enter the house, pick up his son and kiss him, then come back. (Muslim)

The Prophet’s love for children was not restricted to his children and grandchildren. The scope of his mercy and affection embraced all children, and he showed the same interest and gentleness to his Companion’s children. The following hadith narrated by Usamah ibn Zaid (may Allah be pleased with him) shows this humane aspect of the Prophet’s personality:

Allah’s Messenger used to put me on (one of) his thighs and put Al-Hasan ibn `Ali on his other thigh, and then embrace us and say, “O Allah! Please be merciful to them, as I am merciful to them.” (Bukhari)

Some people who were not able to understand the power of expressing love to children wondered why the Prophet (peace and blessings be upon him) played with children and took such an interest in them. Narrated Abu Hurairah (may Allah be pleased with him),

Allah’s Messenger kissed Al-Hasan ibn `Ali while Al-Aqra` ibn Habis At-Tamim was sitting with him . Al-Aqra` said, “I have ten children and have never kissed one of them.” The Prophet cast a look at him and said, “Whoever is not merciful to others will not be treated mercifully.” (Al-Bukhari)

The Prophet was always concerned about everyone’s thought and feeling. The following hadith narrated by Anas ibn Malik (may Allah be pleased with him) proves his thoughtful character:

The Prophet said, “(It happens that) I start the prayer intending to prolong it, but on hearing the cries of a child, I shorten the prayer because I know that the cries of the child will incite its mother’s passions.” (Al-Bukhari)

The Prophet was always patient and considerate with children and took great pain not to hurt their tender feelings.

Narrated Abu Qatadah: “The Messenger of Allah came towards us while carrying Umamah the daughter of Abi Al-`As (Prophet’s granddaughter) over his shoulder. He prayed, and when he wanted to bow, he put her down, and when he stood up he lifted her up.” (Al-Bukhari)

In another narration, we see the Prophet’s tolerance towards children.

Narrated `A’ishah: The Prophet took a child in his lap … and then the child urinated on him, so he asked for water and poured it over the place of the urine. (Al-Bukhari)

Finally I would like to add another saying of the Prophet that proves that Muslims should be conscious to treat their sons and daughters justly:

“Fear Allah and treat your children [small or grown] fairly (with equal justice).” (Al-Bukhari and Muslim)

From all the above hadith, we see Prophet Muhammad’s attitude toward children is an example for the whole human race that shows how to treat them and cherish them at all times.