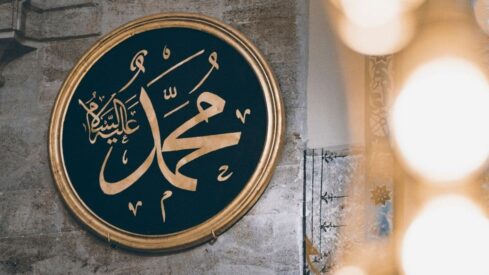 To arrive at a correct appraisal of the Prophet’s contribution to human thought, one has to view it in the background of the history of the world as a whole. That would reveal that this unlettered dweller of the desert of Arabia, who was born in the ‘dark ages’ some 1,400 years ago, was the real pioneer of the modern age and the true leader of humanity. He is not only the leader of those who accept his leadership, but also of those also who do not acclaim him as such: even of those who denounce him! The only difference being that the latter are unaware of the fact that his guidance is still imperceptibly influencing their thoughts and their actions and is the governing principle of their lives and the very spirit of modern times.

It was he [the Prophet Muhammad] who turned the course of human thought from superstition-mongering, love for the unnatural and the inexplicable, and monasticism towards a rational approach, love for reality, and a pious and balanced worldly life. It was he who, in a world which regarded only supernatural happenings as miracles and demanded them for the verification of the truth of a religious mission, inspired the urge for rational proof and the faith in them as the criterion of truth. It was he who, in place of baseless speculation, led human beings to the path of rational understanding and sound reasoning on the basis of observation, experiment, and research. It was he who clearly defined the limits and functions of sense perception, reason, and intuition. It was he who brought about a rapprochement between spiritual and material values. It was he who harmonized faith with knowledge and action. It was he who created the scientific spirit with the power of religion and who evolved true religiosity on the basis of the scientific spirit.

It was he who eradicated idolatry, man-worship, and polytheism in all forms so thoroughly, and created such a firm faith in the unity of God that even those religions which were based entirely on superstitions and idolatry were compelled to adopt a monotheistic theme. It was he who changed the basic concepts of ethics and spirituality. To those who believed that asceticism and self- annihilation alone formed the standard of moral and spiritual purity—that purity could not be achieved except by running away from worldly life, disregarding all the urges of the flesh and subjecting the body to all types of tortures—it was he who showed the path or spiritual evolution, moral emancipation, and attainment of salvation through active participation in the practical affairs of the world around them.

It was he who brought home to man his true worth and position; those who acknowledged only a God incarnate or a son of God as their moral preceptor or spiritual guide were told that a human being like them, having no pretension to godhead, could become the vicegerent of God on earth. It was he who stressed the point that no person could claim holiness, authority, or kingship as a birth right and that no person could be born with the stigma of untouchability, slavery, or serfdom on his person. It was he and his teachings which inspired the thoughts of the unity of mankind, equality of human beings, true democracy, and real freedom in the world.

Leaving aside this realm of thought and moving a bit further, one will find countless practical results of the leadership of this unlettered person firmly impressed on the laws and ways of the world. So many principles of good behaviour, culture and civilization, purity of thought and deed, which are prevalent in the world today, owe their origin to him. The social laws which he gave have infiltrated deep into the structure of human social life, and this process continues up to this day.

The basic principles of economics which he taught have ushered in many a movement in world history and hold out the same promise for the future. The laws of governance which he formulated brought about many an upheaval in political notions and theories of the world and continue to assert their influence even today. The fundamental principles of law and justice which bear the stamp of his genius have influenced, to a remarkable degree, the administration of justice in the courts of nations, and form a perpetual source of guidance for all legists to come. This unlettered Arab was the first person who set on foot for the first time practically the whole framework of international relations, and regulated the laws of war and peace. For no one had previously even the remotest idea that there could be an ethical code of war or that relations between different nations could be regulated on the grounds of common humanity.

This article is part of the author’s book Towards Understanding Islam, “Chapter 3: The Prophethood.” Excerpted, with slight modifications, from: http://www.ymofmd.com/books/tui/chp3.html