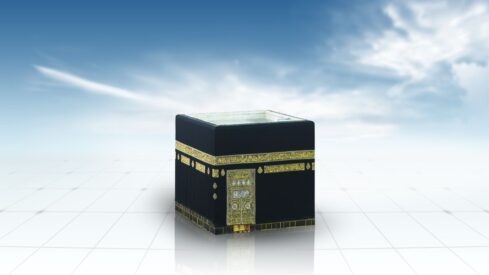 (Before the advent of Islam) Allah, Most High, protected the Sacred House and Quraish (the Pagans) maintained and shouldered the responsibility of watering thirsty pilgrims until the time had come that Quraish were forced due to several circumstances to rebuild the Ka`bah.

Scholars of Sirah (the Prophetic Biography) mentioned several reasons for this act; the most important of them are as follows:

1- A torrent came from the outskirts of Makkah; the thing which caused grave harm to the Sacred House and accordingly they feared that water may leak into it.

2- A woman was scenting the Ka`bah and a spark threw off and caused fire to set off the garment of the Ka`bah.

3- The Ka`bah had no roof and their plan was to demolish it and rebuild it altogether and to roof it.

It is worth mentioning that the Messenger of Allah, peace and blessings be upon him, shared in this operation that took place when he was thirty-five years old.

The compilations of Authentic Hadiths state that when Quraish commenced in acts of rebuilding the Honorable Ka`bah, he (the Prophet, peace and blessing be upon him) used to carry stones along with his people. He carried them on his shoulders while his loincloth wrapped around his hips. His uncle Al-`Abbas told him, “O my nephew! It is better to raise your loincloth on your shoulder; the thing which he did but he instantly fell to the ground unconscious. Then, his loincloth was to be fastened around his hips and he then stood once again to carry stones.

This incident bears the lesson of covering the private parts and purification of honor.

Interestingly enough, (people of) Quraish have made several decisions indicating their glorification to that Ancient House including the following:

Firstly, they were very anxious to keep all expenditures of the construction of the Ka`bah away from ill-gained money to the point that one of them said, “O people of Quraish do not let into this building anything but lawful gains: so no money gained through prostitution or usury or usurp is to be funded for that holy purpose.”

Secondly, books of Sirah cite that people were afraid to proceed with the act of demolishing the Ka`bah and they were greatly afflicted with awe. Then, Al-Walid Ibn Al-Mughirah said, “I will begin the act of demolishing it.” He then took up a pickaxe and said while going to the Ka`bah, “O God, we do not intend to violate Your Sacred House.” In another version he said, “O God, we have not disbelieved (in Your religion), O God, we intend nothing but good.” Thereupon he knocked down part between the two corners; but the rest of the people held back watching out what may afflict Al-Mughirah (of Allah’s anger). The night passed without mishap and Al-Walid was again at work early next morning, so the others became sure of Allah’s pleasure with their work and accordingly they joined him in works of demolition.

Thirdly, all clans of Quraish gathered to share in the honor of reconstructing the Ka`bah. They worked separately in collecting more stones so as to increase the height of the building, until the walls were high enough for the Black Stone to be built once more into its corner. Then a violent disagreement broke out amongst them, for each clan wanted to possess the honor of putting it into its original place and the tension increased to the point that allies were made and preparations for war begun.

The deadlock lasted for about four or five days. Then, they held a meeting in the Sacred House and discussions started. Al-Walid Ibn Al-Mughirah said, “O men of Quraish, take as arbiter the first man who shall enter in through the gate of this House.”

They all agreed to follow this opinion; and the first man to enter the House was Muhammad Ibn `Abdullah, peace and blessings be upon him.

When they saw him they said, “Here is the trustworthy. We accept his judgement. It is Muhammad.

When they explained the matter to him, he said, “Bring me a cloak.” And when they brought it, he took up the Black Stone and laid it on the middle of the garment.” “Let each clan take hold of a border of the cloak, then lift it up, all of you together,” he said. And when they raised it to the right height he took the Stone and placed it in its original place with his own hands; and the reconstruction went on.

Thus, peace and tranquility took the place of dissension and discord due to the blessing and wisdom of Prophet Muhammad, peace and blessings be upon him.

It is worthy noticing here that they could not raise the building on the foundation of Abraham, peace and blessings be upon him, and thereby they took out (raised it above) the Stone which is six or seven cubits (from Isma`il’s Enclosure).

They also made one door for the Ka`bah eastward and they were keen to make it high so as to be able to control those who want to get therein and thus they can give permission of entrance to those whom they want and prevent those whom they do not want.

But the Messenger of Allah, peace and blessings be upon him, had a better point of view. It was reported in the two Sahihs on the authority of the Mother of the Believers `A’ishah, may Allah be pleased with her, that Allah’s Messenger, peace and blessings be upon him, told her, “If your people, had not been recent converts to Islam, I would have spent the treasure of the Ka`bah in the way of Allah and would have constructed its door just on the level of the ground and would have encompassed in it the space of Hijr (the unroofed portion of the Ka`bah which is at present in the form of a compound towards the northwest of the Ka`bah).”

Imam Ibn Kathir commented on this Hadith saying, “So, when Ibn Az-Zubair took authority, he rebuilt it according to the aforementioned directions of the Messenger of Allah, peace and blessings be upon him. It came much better and rightly on those very foundations (laid by) Abraham, having two doors at a level with the ground, one towards the east and one towards the west, through which people can enter from one door and exit from the other.

When Ibn Az-Zubair, may Allah be pleased with him, was killed, Al-Hajjaj wrote to `Abd Al-Malik Ibn Marwan informing him about the doing of Ibn Az-Zubair, thinking that he did so of his own accord and thereby, `Abd Al-Malik (the Caliph at that time) ordered that it be rebuilt on its previous foundations. Accordingly, they demolished the Syrian wall and took its stones and then they leveled up its stones in the ground of the Ka`bah. Thus, its door became high and then they walled up the western door.

During the caliphate of Al-Mahdi or his son Al-Mansur, he consulted Imam Malik in rebuilding it as it had been done by Ibn Az-Zubair but Imam Malik, may Allah have mercy on him, said, “I fear that kings may make this act (demolition and reconstruction of the Ka`bah) as a game.” He, thereby, left it as it was and so far it continues to be so.

Ever since that time, extensions and improvements have been made to the Sacred Mosque and its precincts in order for it to be spacious enough for the Pilgrims coming to it from all over the globe.

The question now is: Is there any indication referring to that the Ka`bah had been previously built before the time of Abraham?

No doubt, the clear texts of the Qur’an and the Sunnah indicate that Abraham, peace and blessings be upon him, was the addressee regarding the order of building the Ancient House and that he was the one appointed to raise its foundations and to direct a (historic) call to people to perform pilgrimage to it.

In this regard, Almighty Allah says, {…and We covenanted with Abraham and Ishmael, that they should sanctify My House for those who compass it round, or use it as a retreat, or bow, or prostrate themselves (therein in Prayer)}. (Al-Baqarah: 125)

He also says, {Behold! We gave the site, to Abraham, of the (sacred) house, (saying): associate not anything (in worship) with Me; and sanctify my House for those who compass it round, or stand up, or bow, or prostrate themselves (therein in prayer). And proclaim the pilgrimage among men: they will come to thee on foot and (mounted) On every kind of camel, lean on account of journeys through deep and distant mountain highways}. (Al-Hajj: 26-27)

It was also reported in the two Sahihs that Abu Dharr, may Allah be pleased with him, narrated, “I said, ‘Messenger of Allah, which mosque was set up first on the earth?’ He said, ‘Al-Masjid Al-Haram (the Sacred Mosque).’ I (again) said, ‘Then which next?’ He said, ‘It was Al-Masjid Al-Aqsa.’ I (again) said, ‘How long the space of time (between them) was?’ He (the Prophet) said, ‘It was forty years.’”