The Sacrifice Rulings and Conditions 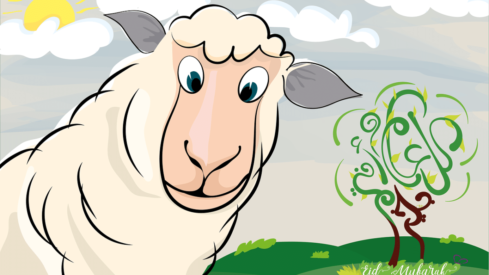 Sacrifice is the act of slaughtering. Some of the rulings concern the persons who are slaughtering and others concerned when the slaughter should take place.

Who should sacrifice and what are the conditions?

Fourth, one should say “Bismillah” (In the name of Allah) before slaughtering. It was reported that the Prophet (peace and blessings be upon him) used to say when slaughtering, “Bismillah, Allahu Akbar” (In the name of Allah, Allah is the Greatest). Ibn `Umar and Qutadah said they don’t know anyone who disagrees with the foregoing. If one has forgotten to utter these words, the sacrifice will be acceptable; and if one adds to it the following supplication it would be even better according to many scholars: “O Allah, This is from You and unto You, so please accept it from me or from the person on whose behalf I am slaughtering.”

The Time of Sacrifice

The earliest time to slaughter is after the `Eid Prayer and sermon; the latest time is the end of the second Day of Tashreeq (the days following `Eid). The slaughtering days, therefore, are three: the `Eid and the two days following it, i.e., 10, 11, and 12 Dhul-Hijjah. This is according to `Umar, `Ali, Ibn `Umar, Ibn Abbas, Abu Hurayrah, Anas, and the opinion of Ibn Hanbal.

What to Do with the Sacrificial Meat

The person who is sacrificing should take one-third of the meat for his or her family, give one-third as a gift, and give one-third to the poor. If he or she keeps more than one-third it is all right. The followers of Ibn Hanifah say the more you give to the poor the better.

The followers of Ibn Hanbal declared that the butcher should not be paid with the meat of the sacrificed animal instead of with money. Ash-Shaf`i and the scholars of his school supported this opinion but said that if the butcher is a poor man, it is all right to give him part of the meat as a present the same as others, especially when he has slaughtered the animal and seen the meat that he is deprived of .

Selling the Meat or Skin

The followers of Abu Hanbal declared that it is forbidden to sell any of the meat or the skin of the sacrificial animal, whether this animal is slaughtered to fulfill a vow or slaughtered voluntarily. Imam Ahmad and Imam Shaf`i forbade selling its meat or any part of it. Al-Hasan and An-Nukha`i permitted selling the skin and buying with the money something beneficial to oneself and others; thus he differentiated between the meat and the skin.

Local health or animal rights laws may restrict where the actual slaughter may take place. Please check with your local mosque for information. If this is the first time you will be doing the slaughtering with your own hands, have someone experienced in this with you to advise and assist.

The conditions for the actual slaughter are this:

1. The animal should be slaughtered by a sharp object which is capable of making it bleed by severing blood vessels, even if the sharp object is a stone or a piece of wood.

2. The slaughtering is to be done by cutting the throat of the animal or by piercing the hollow of the throat, causing its death. The best way is to cut the windpipe, the gullet, and the two jugular veins.

3. No name other than Allah’s should be mentioned over the animal at the time of slaughter.

4. The name of Allah should be mentioned while slaughtering the animal. You should say, “Bismillah, Allahu Akbar.”