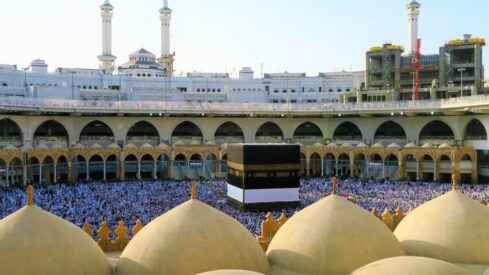 Traditional scholars divide Prophet Muhammad’s (peace and blessings be upon him) life into the Makkah phase and the Madinah phase. This is chronologically valid and historically important.

Additionally, I believe the Prophet’s struggle can be naturally divided into seven phases. Each phase brings forth a different aspect of his noble personality and highlights a different facet of his sublime mission. Studying the various phases of the Messenger’s mission and analyzing its internal dynamics are important factors that give the the Prophet’s biography relevance for today.

The Seeker of Light in a Period of Darkness

As Prophet Muhammad’s biography is recorded, we find him pondering over societal ills for years. The society where he was born was in a state of moral, religious, economic, and social chaos. It is difficult to resist drawing similarities between the seventh century and today. Today’s society has become submerged in violence, abuse, exploitation, racism, alcoholism, economic disparity, and injustice, etc.

The absence of morality in today’s society must weigh heavily on the minds of individuals with insight. They can draw personal inspiration from the Prophet’s life. The Arab tribal society of the seventh century, whose structure was based on greed, debauchery, and violence, had changed in a very short time, by the Prophet, into a society with one of the highest moral, economical, and even political standards in history.

The Warner and Exhorter

One time during his meditation in Hira’ (a cave near Makkah), Prophet Muhammad received the divine revelation. This affirms that celestial knowledge is essential for guiding the limited human intellect. Therefore, we realize the enormity of the task ahead that had burdened the Prophet (peace and blessings be upon him). It is both fascinating and revealing that even the individual who later became the most influential man in human history had these initial periods of uncertainty about his mission. It was the Qur’an; the confidence and support of his loving wife Khadijah (may Allah be pleased with her); and his close Companions who provided him with the support he needed – surely a lesson for us; less perfect human beings!

The next facet of his life was bringing about proactive change by inviting people to Islam. Change is always threatening, and the greater the change may be, the more threatening it is, and the more hostility it would face. This would apply to the change against any established system of practices, whether it is economic, social or behavioral. It would also apply to the change in personal behavior, especially in the attitudes of people. Not surprisingly the struggle for change becomes life threatening. Muhammad had to put his life on the line, and on several occasions the nascent Muslim community had to face the possibility of total extinction.

Fortitude in the face of adversities is the salient feature of that phase. The patience and tolerance which Muhammad (peace and blessings be upon him) displayed during that phase had been a source of strength to many Muslims who have found themselves stressed by apparently hopeless circumstances.

The Migration to Madinah, which had marked the beginning of the next phase, involved careful planning and thorough execution. The Prophet demonstrated that self-help and reliance on Allah are both correlated and essential for success. By nominating the Prophet to leadership by the community of Madinah, another facet of his personality was revealed i.e. the capacity to create a truly pluralistic society with equity and dignity for all religious and ethnic groups.

In a very short period after the Migration to Madinah, the Prophet proved his capability of uniting various factions and setting exemplary standards for cooperation among them. From a person under constant persecution, he became a successful leader with large administrative and judicial responsibilities. The “Covenant (Constitution) of Madinah” provided a good model to follow, even in today’s inescapably multi-religious and multi-cultural world.

The Courageous, Yet Reluctant Warrior

After a brief respite, the Prophet’s mission was consumed by the need to fight wars of survival. These three wars in four years, Badr, Uhud, and Al-Ahzab, besides posing a physical threat on Muslims, must have been extremely distracting and consuming of the Messenger’s time and energy. Yet the work of building the community kept ongoing.

It is important to remember that even though faced with very aggressive proponents, the Prophet and his followers never initiated or instigated any wars. They engaged in these battles with high moral standards such as avoiding killing the innocent and using only the minimum force needed. Women, children, and non-combatants were not to be harmed. When the enemies stopped fighting, they were given immediate protection. Striking a blow because of mere anger, even during a battle, was prohibited. Muhammad (peace and blessings be upon him) used innovative strategies in battles, which include the use of the trench as a means for defense. During the digging of the trench he was an active participant. He consulted frequently with his Companions and followed the majority opinion, even when it was against his own judgment in some occasions.

The Statesman Par Excellence and Teacher

During the next phase, the Prophet (peace and blessings be upon him) showed the ability to compromise and used his foresight and wisdom to realize that peace, even at seemingly unfavorable terms, was better than hostility.

The ‘Treaty of Hudaibiyah’ is a good example for those who negotiate with their opponents. The peace dividend, following this treaty with the Quraishites, was huge and resulted in an exponential increase in the number of Muslims.

That also helped in building a model and a just society that functions in a logical manner. It is an egalitarian society with equity and justice for all, governed by mutual consultation, equality before the law and protection of its most vulnerable members, women, children, orphans, indigents, and slaves.

As illustrated by many incidents from that phase of his life, the Prophet proved to be an exemplary statesman. He mediated disputes efficiently; kept pledges whenever he had given; and faced risks courageously, without compromising, for the sake of peace. His ambassadors to other nations brought with them a message of cooperation, proving his efficiency in diplomacy.

The Compassionate Ruler and Spiritual Leader

The final phase began with the conquest of Makkah – indicating careful planning and the use of overwhelming force to achieve a victory with practically no loss of lives on both sides. He was humble in victory, compassionate, and forgiving to even his most intractable opponents, in a way that is unmatchable in history.

The final sermon consolidates the social, economic, and moral changes that have been brought about in the society.

It is time to prepare for the end. The anatomy of the mission, its growth, and evolution in some ways parallel the various stages of human life itself. These phases reflect not only the growing complexity of the message but also the increasing maturity of its recipients.

The Prophet’s fundamental mission was to interpret and spread the Qur’anic ideology. Almighty Allah says about the noble Prophet,

(Indeed there is for you in the Messenger of Allah an excellent pattern) (Al-Ahzab 33:21)

His wife `A’ishah (may Allah be pleased with her) called him the living embodiment of the Qur’an. His special blessings for us were the Qur’an and Sunnah.

It’s true that over time, many differences and sects have emerged amongst Muslims. Still, the core messages of the Qur’an, and its realization in the life of the Prophet (peace and blessings be upon him) are alive and potent, and continue to provide spiritual solace, intellectual satisfaction, and societal discipline to many, making Islam the fastest growing religion in the world.