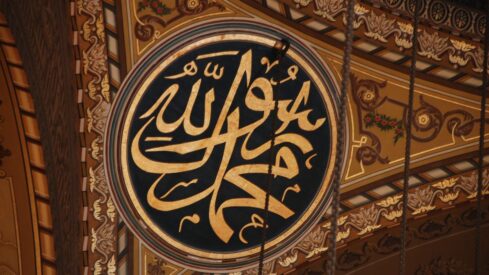 Prophet Muhammad (peace be upon him) was someone who understood the importance of communicating with people; he did not converse with or embrace only believers.

Rather he saw all people, irrespective of religion, language, race, sex, social status or role as possessing value and thus he established good communication with all of them.

Prophet Muhammad brought the divine message into a form that people could perceive, hear and feel, about which they could read, talk and write; he set examples that could be brought to life and practiced.

As a Prophet, Muhammad’s mission and goal was to establish a good dialogue with people and to communicate; to do this, he not only used the various means of communication that belonged to his era, he also took into account the psychological peculiarities of the individual and society in order to present the message in the best and most effective way.

Identified Himself as a Source of the Message

As we know, Prophet Muhammad led a very natural life in Makkah. Before the advent of his prophethood he was known as a reliable person in the community, but his other characteristics were unknown. Thus, when his prophethood was proclaimed, the people objected, saying:

He was ordered to say:

{…Say: ‘If God had so willed, I should not have rehearsed it to you, nor would He have made it known to you. A whole life-time before this have I tarried amongst you: Will you not then understand?} (10: 16)

Some of the words with which Prophet Muhammad identified himself are:

“I am just a Messenger; the One Who transmits guidance to the right way is Allah.”

During the Battle of Badr, when some wanted to offer their own guard duty to the Prophet, so that he would get more blessings, he told them:

“You are not more powerful than I, nor I than you; I have no need of the blessings you have received.”

He was careful with his sympathetic behavior to feelings of equality among people. In the same way that he made his characteristics apparent, Prophet Muhammad was also careful about the characteristics of the people around him.

Paid Attention to the Characteristics of the Individual

Prophet Muhammad desired that a person who was to perform public services, for example, the imam of a congregation, should be the person who knew and read the Quran the best.

In addition Prophet Muhammad stated that it would not be right for someone to take on the role of imam in place of an authorized person without the permission of the latter person.

From this behavior we can conclude that the Prophet showed the necessary consideration for the relationship between younger and older people and between position and status.

Prophet Muhammad was careful about individual differences when conversing with people. For example, he had a conversation with a Bedouin, whose wife had given birth to a black child; the Bedouin denied that the child was his saying:

“My wife gave birth to a black child. I want to reject this child.”

“Do you have camels?”

“What color are those camels?”

The Prophet: “Are there any white, black or grey camels among these?”

The Bedouin: “Yes, of course. There are grey camels among them.”

The Prophet then asked:

“Well, where do you think these grey camels came?”

“O Prophet, that is in their blood; they take after the ancestors.”

“Perhaps this boy has taken after someone in his ancestry (he resembles them).” (Al-Bukhari, 7314)

The Prophet did not merely say, relying on his authority as Prophet:

“No, I tell you as the Prophet of Allah that this is your child.” Rather he spoke in a way that the Bedouin could understand, taking care to use an example that related to the Bedouin’s life, and thus, by benefiting the experiences of the addressee he was able to solve a problem in a convincing manner by having the Bedouin come up with the solution himself.

Prophet Muhammad spoke to a variety of people. Some of them were able to see him, listen to him, share their daily life with him and constantly be under his influence. Others did not have such an active relationship with him, while still others joined the believers later or were part of the following generation.

Prophet Muhammad was able to understand the social psychology, as well as the individual characteristics of the people who made up the society, and thus used different methods of communication. For example, he acted according to the conditions of the region he was in when eating, drinking or dressing.

Again, when speaking or delivering a speech, he constantly observed the abilities of the addresses who listened to him, and the examples he used were chosen a world in which the addresses lived and which they understood well.

From animals, the most common examples he would use would be camels, and plants he would use the date. Some of the people around him were of the city while others were Bedouins (living in the desert). For this reason, Prophet Muhammad, while forwarding a message that was to cover all ages and all people, acted wisely in the difficult task of establishing communication with the first addresses; he chose methods that were in accordance with their concepts and thoughts, their perceptions and abilities.

Established Communication with People at Every Opportunity

Prophet Muhammad actively communicated with the people around him; he treated those who came to visit him kindly and he visited those who could not come, trying to forward the message to them. He would wander around fairs and he went to Ta’if for purposes of communication.

There was a Jewish child who served the Prophet. When the child became ill, the Prophet Muhammad went to visit him. The Prophet sat by the child’s head and informed him that he wished for the child to become Muslim. The child looked at his father, and his father indicated that he should follow Prophet Muhammad; thus, this child became Muslim. His general approach and recommendation was:

“…if one person comes to Islam through you this is better for you then owning red camels.” (Al-Bukhari & Muslim, 4)

The Prophet was pleased when the child became Muslim and he expressed his pleasure:

“Thanks be to Allah Who has saved him from the flames through me.” (Al Bukhari, 1356)

Used Sympathy to Affect the Person Being Addressed

God introduced His Prophet as: {Let it be sworn that such a prophet has come among you that any troubles you have will be troublesome for him; he is fond of you, he is tender, merciful to the believers.} (9: 128)

This verse focuses on the empathetic attitude of the Prophet. In a hadith, the Prophet wanted to try to have the believers understand one another and to understand what each other were feeling:

“….when a servant does not want for his neighbor or brother what he wants for himself then he does not fully believe.” (Muslim, 45)

Brought Love for Mankind to the Fore

One day he took hold of Muadh ibn Jabal’s hand and said:

“O Muadh, I swear to Allah that I truly love you.” Then he said “O Muadh, do not neglect to say at the end of every prayer ‘My Lord! Help me to commemorate you, to thank you and to serve you well!” (Abu Dawud)

Addressed the Mind and Emotions

For example, some of the Companions told him:

“O Allah’s Prophet! The wealthy have taken the blessings and gone. They pray like us, they fast like us, but they give more to charity than we can.”  The Prophet replied: