The Wise Leader (Pbuh) What Would Muhammad Do? (Introduction) 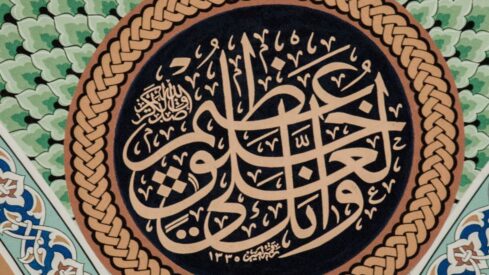 God Almighty sent Prophets to teach humankind about morality and to clarify the purpose of existence.

He also sent these Prophets to create role models for men and women to emulate, to learn from their example and to aspire to be like them.

As Muslims we share a common prophetic heritage with our Jewish and Christian friends. We all know and love Adam, Ibrahim (Abraham), Musa (Moses), Dawoud (David) and Sulaiman (Solomon) (peace be upon them all).

With our Christian friends we also share a deep and enduring love for Isa or Jesus Christ (peace be upon him) whom we respect as a mighty Prophet of God who was born of a virgin mother and who was raised alive into heaven.

It was in order to complete this mighty lineage of Prophets that we Muslim believe God sent down angel Gabriel with divine inspiration to a man in Makkah.

This man, just like other Prophets before him, had been a shepherd. He was also a merchant. He had many trappings of normal ‘everyday’ life – he was a husband, a father, a friend and he had a job. He also had a rather big reputation for being truthful and just.

He was a thoughtful man who was often in the countryside lost in self-reflections and deep in contemplation. Then, one day, he received his first revelation from God Almighty and life for him and the world as we know it changed forever. He became a spiritual leader, who softened hearts and up-lifted souls.

He also became a social leader, who negotiated diplomatic alliances and who led wars. This man is Muhammad (peace be upon him), and this is a series of articles about him.

In our 21st. century social contexts, academics and social commentators all unanimously agree about the persistent negative imagery of Islam, Muslims and indeed of the Prophet Muhammad. Such imagery is challenged and continues to be challenged, however rather than enter into a defensive, ‘I am not a terrorist’ mode, there is an increasingly urgent need to engage into discourse that celebrates the richness and diversity within cultures, and in the context of this article within Muslim culture – Islamic history, theology and contemporary Muslim experience.

Maurice Halbwachs, the German philosopher writes about a community’s collective memory which through common commemorations, symbols and important days forms and influences everyday individual behaviour. It may be argued that in our globalized world, our shared common identity often forgets Muslim contributions to scholarship, scientific development and social frameworks. We need to remind ourselves and our world of a Muslim role in shaping the society we recognize.

From the point of this article, where best to begin but with Prophet Muhammad (peace be upon him). It is in a context of independent self reflection, shared communal remembrance and inter-community dialogue that this article asks the question whether as individuals from Muslim or other religious and non-religious backgrounds – Do we really know Muhammad?

The Series – What would Muhammad (peace be upon him) do?

The Prophet Muhammad (peace be upon him) is the epitome of a good humanity being. This series of articles will celebrate his life both as a religious figure whom Muslims love and adore, and also as a historical personality who can be an inspiration for any man or woman irrespective of religious, social or cultural background.

Through a series of articles we shall explore aspects of the Prophet’s life relating it in each instance to our contemporary lives. In his example we shall try and unearth meanings that we can use and implement in our lives today. These shall be reminders and in discovering who Prophet Muhammad (peace be upon him) we shall discover our own identities and shared heritage in a world that is rapidly becoming a global interconnected village.

As Muslims, we must reflect back on our Prophet’s life and understand how he lived it – what did our Prophet do? We must try to emulate his style – justness, fairness, steadfastness, boldness. We must look back to his life and his example and let our actions be inspired by what he did.

This series of articles will enable just this – how can Prophet Muhammad inspire and influence contemporary struggles:

– What can we learn from his character and how can we implement these learnings in our lives today? Can we always be truthful like him who was known as As-Sadik or the truthful one?

– Can we be kind in the face of adversity as he was? And can such kindness help us deal with Islamophobia?

– In his treatment and respect for people who were not Muslims, can we reflect about our own dealings with people from other faiths or no faith backgrounds? What did Muhammad (peace be upon him) do about inter-faith dialogue?

– What would he say about women in Islam? How did he show respect to women?

– What would he say about the so-called ‘Arab spring’?

These are only tasters about the kind of subject matter that this new series “What would Muhammad (peace be upon him) do?” will discuss. There is so much more that we can talk about.

To begin with we shall start with a discussion in the next article about national identity. Are we Muslims first, or are we Egyptian, Malaysian, British or whatever?

What is our position within the global Muslim ummah and can there ever be unity within this ummah?

Where do our loyalties lie and where should they lie?

In answer to each of these questions we shall ask – What would Muhammad (peace be upon him) do? We will also try and reflect – can we be more like him?

Throughout this series we will welcome your comments. As reader, please let us know what you would like us to discuss in forthcoming articles. Together let us engage in an inspirational journey of exploration and discovery about a simple man who became a role model for the whole of humanity. Together, let us learn, let us be inspired and let us share.

We shall ask and we shall answer – what would Muhammad (peace be upon him) do?