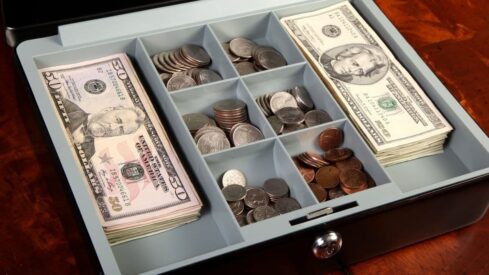 Understanding the capitalist financial system, which functions in today’s world, is a vital issue. Without doubt, the core of this system is interest or riba, which is explicitly forbidden in Islam. Treasury bonds are promises to pay the bearer a certain amount of money at a particular time. These are sold to the highest bidders. Those who buy these bonds do so at a discount and therefore lend money to the government on interest. This is clearly riba. However there is much more to it than this. To explain how it works, we need to take a careful look at excess liquidity and where it comes from.

In the current financial system, every bit of money that enters an economy comes as a result of debt with interest to a bank. In the past money was based on real commodities such as gold, silver or, going back to the time of Prophet Muhammad (pbuh), dates or grains of cereals such as wheat. In such circumstances, anyone with the ability to produce these materials literally made money. Today, money doesn’t grow on trees, but starts its life and ends its life with the stroke of a pen or the touch of a keyboard inside the world’s central banks.

A central bank such as the Federal Reserve in the US is the bank of the bankers. It is the lender of last resort. When no one else can lend money, the central bank can do so. How? It just writes down the money in the right account and voila the money is created out of nothing. Of course the borrower doesn’t get it for nothing, but pays interest on this money created out of nothing. Treasury bonds play a key function in this because they are often bought by the Federal Reserve. Thus, giving the government an effectively unlimited supply of credit. If treasury bonds are sold in this way, they actually create extra liquidity not reduce it.

However, this is only one way in which money is created from nothing in the banking system and lent on interest. The other way involves what is called the fractional reserve system. This is where banks can take some money from your deposit account and without changing the amount in your account. They call the money thus taken as excess reserves, which then can be lent to someone else – of course with interest. Once the money is lent to that other person, inevitably the money returns to someone’s deposit account where it can again be lent out. Depending on the fraction of money, held in deposit accounts required by the government, banks can lend, in this way, many multiples more cash than there is original money ever placed into the banks. (There is no original money anyway since it all originates in nothing but the instruction of a central banker.)

If all the money comes from creating debts in central banks and in other banks, where does the extra money come from to pay the interest? Well, there are 2 ways for getting this money. One is an ever-increasing volume of debt and the other is getting the bank to pay it by working in one way or another for the bank. In this way, every bit of money we earn comes from, not merely interest based loans, but loans from invented money. In this way, much of the world is enslaved to work for the banks, directly and indirectly. Once the loan is repaid, the money disappears magically the same way it was created.

Islam provides ways for financing to happen free from interest, which would bring about much greater justice and indeed really produced wealth in the world. Wealth comes from applying our minds and bodies to developing the natural world so as to produce benefits for people. It doesn’t come from the endless speculations of systemically crisis ridden financial markets, with their booms and busts created from fictitious wealth. Interest, through its legal separation of investing money and the use of that money, detaches the financial markets from physical, human, and moral realities. Treasury bonds are a cornerstone of this system if not the very foundations. Without treasury bonds, the financial world would lose the most certain form, of interest based investment. Without the right to buy treasury bonds for invented money, the banking elite would lose one of their most profitable (literally) money making schemes.

This will not happen easily of course, the power of this elite is established not by a mythically benevolent invisible hand of the market, but by cold hard power politics. The power of the banking elite is quite capable of persuading rulers all over the world to carry out all kinds of oppression if it keeps the interest payments flowing.