Why defend the Prophet, may God bless him and grant him peace? 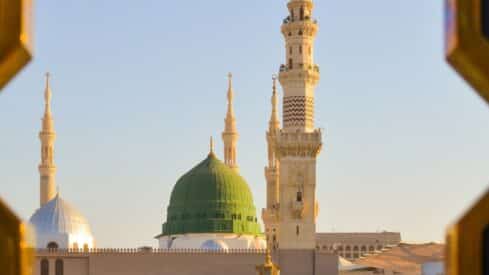 Directing such question to a Muslim person may not sound well at all, because this question is one of the axioms for every Muslim,  rather from the core of faith, because a Muslim’s faith will not be complete without venerating the Messenger, may God’s blessings and peace be upon him, and his reverence and devotion for him with everything he possesses, even his soul.

And the Almighty said commanding: {So that (men) may believe in God and His Apostle, and honour Him and revere Him…} [Al-Fath: 9] “He declared that the right of the Messenger of God, may God’s blessings and peace be upon him, on his ummah is to be strengthened, honored and dignified”

However, the answer to this question is a matter of reminding and alerting the heedless who are preoccupied with the concerns of worldly life at a time when the infidels have mastered the aggression against the status of the Messenger of God, may God bless him and grant him peace, in various ways, explicitly and implicitly. It therefore, became pertinent on every Muslim wherever he found himself to defend the honour of the Prophet, may God’s blessings and peace be upon him and triumphs his Sunnah as much as he was able to, and this is not a matter of supererogatory or marginal interests. Rather, it is a matter of faith, monotheism and obedience, and therefore we say – as a reminder and warning in a concise answer – we defend our Prophet and our beloved, may God’s blessings and peace be upon him for reasons:

Al-Khattabi said: “So what it means is that you be sincere in my love until you perish yourself in my obedience, and my satisfaction affects your desires, even if it is your perdition.” And as the Prophet, may God’s blessings and peace be upon him, told him that the true sweetness of faith is in the love of God Almighty and His messenger, may God bless him and grant him peace. He said: “Three things, whoever found them in him found the sweetness of faith: that God and His Messenger be dearer to him than others, and that he loves a person for Allah’s sake only. And that he hates to return in disbelief as he hates to be thrown into the fire” . As you can see, these three characteristics relate to the heart and the soul, and with them the heart is corrected and strengthened, and then the body is corrected, so the good life is straightend.

2- Because defending him, may God’s blessings and peace be upon him, is the title of his voluntary conditional love for the integrity of faith, and therefore, may God’s blessings and peace be upon him says, “None of you believes until I am dearer to him than his son, his father, and the whole people. So his defense is above his defense of his soul, offspring, money and honor, and preceded those necessities, and it is known among all rational people that maintaining a pillar of something from damage and wastage is more important than the rest of its components. How much more if the pillar is one of the pillars of Islam and faith. Accordingly, defending the Prophet, may God bless him and grant him peace, is a great source of religion, and a great and venerable worship and closeness that we draw closer to God Almighty.

The Almighty says, warning: {You tell them: “If your fathers and sons, your brothers and wives and families and wealth, or the business you fear may fail, and the mansions that you love, are dearer to you than God, His Apostle, and struggling in His cause, then wait until God’s command arrives, for God does not show transgressors the way.”} [At-taobah: 24]

This noble verse warns that preferring these matters to defend God and His Messenger may lead to punishment and torment.

3- Because he, may God’s blessings and peace be upon him, was compassionate, merciful, friendly and compassionate to the ummah, and he was the one who said, may blessings and peace be upon him – explaining his exaggeration of compassion for his ummah -: “The similitude of mine and that of my Umma is that of a person who lit fire and there began to fall into it insects and moths. And I am there to hold you back, but you plunge into it.” .

The people of the Madinah have been terrified when they heard the thunderous sound early in the morning and came out upset and afraid, then they saw him, peace be upon him, returning from the place of the sound on an unsaddled horse and his sword slung over his neck, he says to them: ” Don’t get scared ” .

He used to say: “ Were it not for me to be hard on my ummah ..” Such feelings and compassion are often mentioned from him in words and deeds. And he, may the blessings and peace of Allah be upon him, was harmed, sieged and oppressed because he was calling to the real Islam. He, rather, sacrificed all he had on way is for people to come out of darkness into the light, and to save them from the blind Jahiliyya to the light of divine guidance, and therefore defending him, may God’s blessings and peace be upon him, was a matter of reward and loyalty – even if we could not reach it – in return for what he did for the ummah, may God’s blessings and peace be upon him from great services, the greatest of which is the liberation of human minds from the worship of the creature to the worship of the Creator alone .