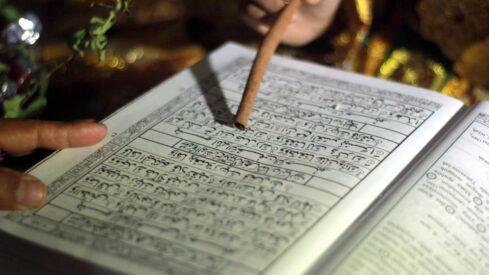 The above verse is full of hope that inspires and motivates us and shows that there is always a bright light at the end of the tunnel. Whenever we are in any difficulty, the above verse inspires us to patiently persevere in our efforts and place our full hope and trust in Allah the Almighty.

Allah is the Best of Planners, and during times of difficulty, as well as during times of ease, we should always remember and resort to Him. When we patiently strive in the path of Allah then we prepare ourselves to receive Allah’s kindness:

In addition, Allah in His mercy and kindness has appointed angels to protect us and to pray for our forgiveness:

[Almost might the heavens above be rent asunder while the angels hymn the praise of their Lord and ask forgiveness for those on the earth. Lo! Allah is the Forgiver, the Merciful.] (Ash-Shura 42:5)

When one is striving in Allah’s path, one should have a goal and set one’s sights on that goal. With every striving there will be obstacles — success does not come easily. But patience and perseverance, together with an unshakeable belief in Almighty Allah, give one the impetus to carry on despite the difficulty and despite the hardships, with the knowledge that the suffering will end and that the striving will bear fruit:

[And that man hath only that for which be maketh effort. And that his effort will be seen. And afterward he will be repaid for it with fullest payment.] (An-Najm 53:39-41)

Continuous striving is the only way to overcome obstacles. It was only through striving, persistence, and perseverance, that apartheid in South Africa was dismantled although many people thought it impossible. Similarly, it was only through the same striving and surmounting huge obstacles that the Berlin Wall came crumbling down and that Communism failed. So too will all oppressors come tumbling down. The will of a people inspired by freedom and the return of their land, together with hope as their rocket fuel, will propel them to confront the oppressor as they look forward to victory and might. Allah has promised that His religion will prevail:

[Allah hath decreed: Lo! I verily shall conquer, I and My messengers. Lo! Allah is Strong, Almighty.] (Al-Mujadilah 58:21)

Many believers all over the world are being mistreated and tortured simply for their belief. They are suffering various forms of difficulties and hardships:

[They had naught against them save that they believed in Allah, the Mighty, the Owner of Praise.] (Al-Buruj 85:8)

The oppressors parade the earth with brutal arrogance, racism, and discrimination, regarding one race or nation more worthy of respect than another and having total disregard for fairness, justice, mercy, compassion. They show no fear of Allah. Yet their time will come soon and they will face a humiliating punishment. Media blackouts, propaganda, lies, and conspiracies will not help them on the day when all will be revealed:

[Those who disbelieve assert that they will not be raised again. Say (unto them, O Muhammad): Yea, verily, by my Lord, ye will be raised again and then ye will be informed of what ye did; and that is easy for Allah.] (At-Taghabun 64:7)

[Those who oppose Allah and His Messenger will be abased even as those before them were abased; and We have sent down clear tokens, and for disbelievers is a shameful doom.] (Al-Mujadilah 58:5)

[This day it is those who believe who have the laugh of disbelievers.] (Al-Mutaffifin 83:34)

These verses inspire us and fill our hearts to the brim with hope.