You Are a Muslim, You Just Don’t Know It Yet 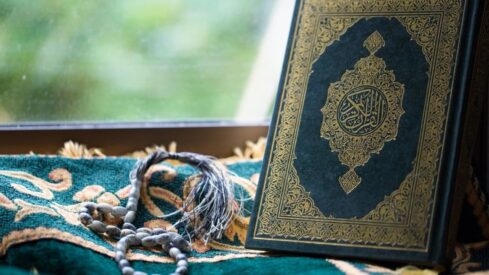 I was born in England just after World War II. My family are Catholic. My father, who was a Methodist, converted to Catholicism to marry my mother. We were brought up in a strictly religious manner and I could answer the Mass in Latin before I could read or write in English. Religion was one of my favorite subjects at school. I did well at it too. By the time I was eleven I earned a scholarship to a boarding school run by Jesuit priests and my parents were hoping that they would have a priest in the family – every Catholic parent’s dream.
At the school however, I began to notice the inconsistencies between what was taught in religious lessons and what was taught in history classes. When I started to question the teachers about the differences in history and religious lessons and asked which was correct, I was told that I was just learning history as a subject to pass an exam but that with religion, I had to have faith.
Around this time too, there was a change of Pope. Pope Pius XXII died in 1958 and Pope John XXIII was elected as his successor. Catholics are taught that the Pope is infallible (incapable of being wrong) and yet, rules are often changed/updated by new Popes. It seemed illogical to me that some things had to be changed if the previous Pope was incapable of making a mistake. In the 14th and 15th centuries there was a period when there were two Popes, one in France and one in Rome. Each of Popes excommunicated and constantly ruled against one another.
For a very short time there were even three Popes. How could two or even three Popes, be infallible if they constantly ruled against one another? The more I learned, the more unsettled I became. I questioned everything; after all, if something is true, it should be easy to explain. The teachers grew more frustrated with my questions and ended up beating me with canes because they could not give me proper answers. Repeatedly I was told I just had to have faith.

One time, after being beaten I ran away and when I arrived home I was beaten again by my father because I left the school. He was insisting that I should go back, but I told him I was determined that if he took me back, I would run away again. There was no option but for me to leave the school and go to a normal high school. All the time that I remained at home, I was made to attend Church with the rest of my family, but my heart was no longer in it. At that time, I became an Agnostic… not sure of my beliefs, but knowing that the one religion I did know anything about was not correct.

As soon as I could, I left home. I joined the Royal Air Force when I was 15 years old and did not go to Church at that time. I met my future wife when I went to her home on vacation with her brother. She belonged to the Church of Scotland (a Protestant, Church). We decided not to have a church wedding, but under pressure from her father, we visited the local minister together. He asked me about my beliefs and I was totally truthful with him. He was a good, straightforward person and we had several meetings and, much to our surprise, he appreciated the fact that I was honest with him. Although I never agreed with his views on religion, he agreed to marry us anyway, giving us the Bible that he used in the service as a wedding gift. We had a quiet wedding with only the minister, my wife and I, her father and two witnesses in the church.

After I finished my service in the RAF, I left the UK in 1976 to work in a Muslim country teaching Electronics to air force officers and NCOs. I never knew a Muslim before this time, and I had certain preset ideas (all wrong I hasten to add) of what Islam was about. There was nothing in the behavior of the students that really impressed me. They were not praying and in general they did not have a religious attitude; some were even drinking and womanizing. Most of them had a rather lackadaisical attitude to their studies, saying “Insha’Allah” to all my instructions, and they gave me the impression that they didn’t really have to work hard; their philosophy was “whatever will be, will be”. I started to read the Qur’an for two reasons: firstly, I wanted to be a good instructor, and had hoped that if I could get inside the students’ mindset then I would get my points across to them better and hopefully instill in them more enthusiasm for their studies, and secondly, I wanted to prove Islam wrong.

Once the students found out that I was reading Qur’an, they brought a Sheikh to the classroom to talk to me. We had several detailed discussions, and he questioned me about my beliefs. At the end of one of our talks, the Sheikh said to me, “You are Muslim, you just don’t know it yet”.

For several months I continued to read Qur’an, and the more I read, the more impressed I was by the logic, consistency and purity of Islam. The rest, as they say, is history… I made Shahadah late in 1976.