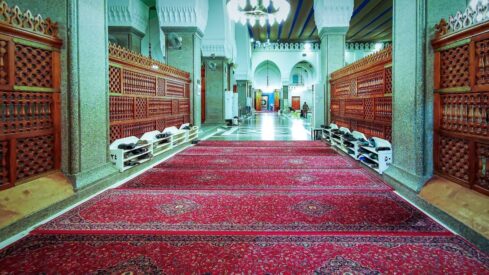 After arriving in Madinah and constructing his mosque, the Prophet (peace and blessings be upon him) turned his attention to cementing the ties of mutual brotherhood among the Muslims of Madinah, the Ansar, and the Muslim immigrants, the Muhajirun. It was indeed unique in the history of the world. A gathering of 90 men, half of whom were Muhajirun and the others Ansar, assembled in the house of Anas ibn Malik where the Prophet gave the spirit of brotherhood his official blessing. When either of the two persons who had been paired as brothers passed away, his property was inherited by his brother-in-faith. This practice continued till the following verse was revealed at the time of the Battle of Badr and the regular rule of inheritance was allowed to take its usual course:

[But kindred by blood are nearer to one another (regarding inheritance).] (Al-Anfal 8:75)

“Brotherhood-in-faith” to quote Muhammad Al-Ghazali in his Fiqh As-Sirah “was holding subordinate every distinction of race and kindred and was supporting the Islamic precept: None is superior to the other except on the basis of piety and God-fearing.”

The Prophet attached to that brotherhood a valid contract; it was not just meaningless words but rather a valid practice relating to blood and wealth rather than a passing whim taking the form of accidental greeting.

The atmosphere of brotherhood and fellow-feeling created a spirit of selflessness infused deeply in the hearts of his followers and produced very healthy results. For example, Sad ibn Ar-Rabi, one of the Ansar, said to his brother-in-faith Abdur- Rahman ibn Awf, “I am the richest man among the Ansar. I am glad to share my property half and half with you. I have two wives; I am ready to divorce one and after the expiry of her iddah (the prescribed period for a divorcee to stay within her house unmarried), you may marry her.” ButAbdur Rahman ibn `Awf was not prepared to accept anything: neither property nor home. So he blessed his brother and said, “Kindly direct me to the market so that I may make my fortune with my own hands.” And he did prosper and got married very shortly by his own labor (Al-Bukhari).

The Ansar were extremely generous to their brothers-in-faith. Abu Hurairah reported that they once approached the Prophet with the request that their orchards of palm trees should be distributed equally between the Muslims of Madinah and their brethren from Makkah. But the Prophet was reluctant to put this heavy burden upon them. It was, however, decided that the immigrants would work in the orchards along with the Ansar and the yield would be divided equally among them (Al-Bukhari).

Such examples point directly to the spirit of sacrifice, altruism, and cordiality on the part of the Ansar, and also to the feeling of appreciation, gratitude, and self-respect that the immigrants held dear to their hearts. They took only what helped them eke a reasonable living.

In short, this policy of mutual brotherhood was so wise and timely that many obstinate problems were resolved wonderfully and reasonably.

Abridged and adapted from the author’s The Sealed Nectar.

Sheikh Safiur Rahman Al-Mubarakfuri was born and received his education in India. He taught jurisprudence and hadith in the Slafi University and worked as the editor in chief of its magazine Muhaddith. He worked in the Sunnah Center affiliated to the Islamic University, Madinah, Saudi Arabia. He authored a number of books including Ar-Rahiq Al-Makhtum (The Sealed Nectar) which was honored by the World Muslim League with the first prize in a Prophet’s biography contest. He passed away in December 2006.