A Pact of Love 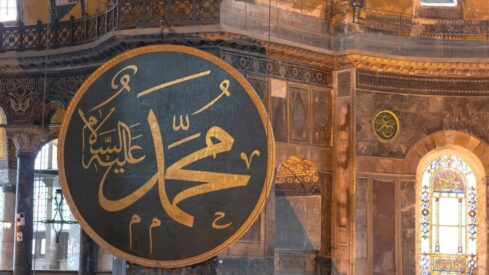 Sure you have; and this person might be your wife, father, mother, child, or an intimate friend. But, have you ever thought that this person might be Prophet Muhammad (peace and blessings be upon him)? One may say, “why should we love him that much. It suffices that we ‘just love him.'” Here, I have to recall the Prophet’s saying, “None of you will have faith till he loves me more than his father, his children, and all humankind” (Al-Bukhari).

I dare say that whatever my or your love to anyone or anything is, it is not in any way comparable to that showed by the Companions of the Prophet (peace and blessings be upon him) to his honorable self.

Do you really know how much was the love of the Companions to the Prophet (peace and blessings be upon him)? In fact, they claimed to love him and the issue did not stop there. Actually, they proved their “claim of love” by sacrificing their own property, family, and selves. In other words, they signed their pact of love to him with their blood.

What I am saying here is not a fairy tale or an imaginary narration from old times. Let’s take as an example, Khubaib ibn `Adiy, the Companion who was captivated by the polytheists of Quraish. When they took him out of the Sanctuary of Makkah to kill him. He said, “Allow me to offer a two-rak`ah prayer.” When he finished praying, he went to them and said, “Had I not been afraid that you would think I was afraid of death, I would have prayed for a longer time.” He then said, “O Allah! Count them and kill them one by one, and do not leave anyone of them,” and added,

As I am martyred as a Muslim,

I do not care in what way I receive my death for Allah’s Sake,

For this is for the cause of Allah,

He will bless the cut limbs of my body.

Before ibn `Adiy’s execution, one of the Quraish leaders approached him saying, “Would you like Muhammad to be in your place and you be healthy and secure among your kin?” Only then did Khubaib burst like a thunderstorm, “By Allah, I would not like to be among my relatives and sons enjoying all the world’s health and well-being while even a tiny thorn hurts the Prophet.”

Then, he was killed. So it was ibn `Adiy who first set the tradition for any Muslim sentenced to death in captivity, to offer a two-rak`ah prayer before being executed.

Thus, he proved his love to the Prophet, peace and blessings be upon him, in a practical way by sacrificing his own life as he emulated the English proverb that appeared in later times reading, “Actions speak louder than words.”

Another shining lesson can be learned from the dialogue between the Prophet (peace and blessings be upon him) and Rabi`a ibn Ka`b who said,

I was with Allah’s Messenger (peace and blessings be upon him), one night. And I brought him water for ablution and what he required. He said to me, “Ask (anything you like).” I said, “I ask your company inParadise.” He  said, “Or anything other than that?” I said, “(No), that is (what I want)”. He said, “Then help me to achieve this for you by devoting yourself often to prostration.” (Muslim)

A third example from history states that a man went to his teacher complaining that he loves Prophet Muhammad but he cannot see him in his dreams. The teacher told him, “your love of the Prophet is not sincere, that’s why you cannot see him in your dreams!” The man argued that he loves the Prophet more than anything else and he was firm about that. Upon the man’s insistence, the teacher invited him to have dinner and stay the night at his home. The man accepted the invitation. The teacher intentionally ordered that a great amount of salt and pepper should be added to the food that was served, with no water to be given to the guest. The man was too shy to ask for water after he had that salty and spicy food. Both the teacher and the man went to bed. At Dawn time, the teacher waked the man up to pray and asked him, “Tell me about what you have seen in your dreams tonight?” The man said, “I saw flowing rivers of sweet fresh water and heavy rains.” The teacher commented saying, “Your thirst was real and thus you saw water in your dreams. If your love for the Prophet (peace and blessings be upon him) was real, you would have seen him as well!”

Why are there so many Muslims who cannot see the Prophet in their dreams, though they repeatedly claim that they do earnestly love him? For sure, the problem is in them and us all and not in the Prophet himself. The Prophet (peace and blessings be upon him) was reported to have said, “Whoever sees me in a dream, then surely he has seen me; for Satan cannot impersonate me” (Al-Bukhari).

Thus, were it impossible for us to see him, he would have said it and let us know about it. But, what can be understood from his saying is that seeing him in one’s dreams is possible and applicable. However, our hearts have to be truly eager to have a glimpse of him.

How do we prove our love to him? By just saying that we love him? This would be very easy and it would cost nothing at all! You can say whatever you want, but, you should not demand that people start believe in what you say, unless you bring them decisive evidence that proves your saying.

The only way available to us to prove our love for the Prophet is that we start following his model example. Following his example is not meant to be merely imitating his outer appearance as regard with what we wear and what we eat. Rather, it is for us to abide by his orders; to do what is declared lawful and to avoid what is declared unlawful by him. This is the true meaning of loving him and following his own model example. Abu Hurairah (may Allah be pleased with him) said,

The Messenger of Allah, peace and blessings be upon him, passed by a burial site and said, “Peace be upon you, O home of believing people. Allah willing, we shall meet you soon. I wish we could see our brothers.” The Companions asked, “Are we not your brothers, O Messenger of Allah?” He said, “You are my Companions. My brothers are the ones who will come after (us).” They said, “How will you know the people of your nation who will come after you, O Messenger of Allah?” He said, “If a man has a group of horses with white blazes on fore-heads and legs among horses which were all black,tell me, would he not recognize his own horses?” They said, “Certainly.” He said, “They (my brothers) will come with white faces and limbs  from their ablutions, and I will precede  them to (my) cistern. But there will be some who will be driven away from my cistern as a stray camel is driven away. I will call them: Come! It will be said, ‘They changed matters after you,’ then I will say, ‘Be off, be off.'” (Muslim)

May Allah Almighty preserve us from changing anything after His honorable Prophet (peace and blessings be upon him) and may Allah make it feasible to us to meet with him at his cistern, amen.