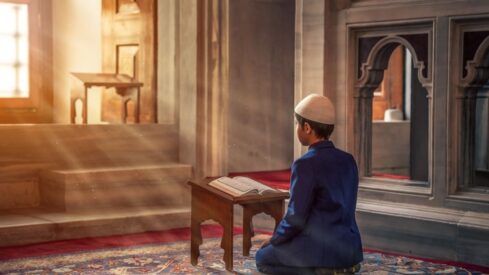 The merits of remembrance of Allah Most High are highlighted in the following Qur’anic verses:

[Men who celebrate the praises of Allah, standing, sitting, and lying down on their sides.] (Aal `Imran 3: 190)

The Prophet (peace and blessings be upon him) is reported to have said, “Surely, Allah, Glorified and Exalted be He, says, ‘I will be with My servant as long as he makes mention of Me and moves his lips in making mention of Me.’” (Reported by Al-Bukhari) and “No people assemble to remember Allah but angels surround them, mercy covers them, sakinah (calmness) descends upon them, and Allah mentions them in His assembly.” (Reported by Muslim)

The merits of supplication are highlighted in the following hadiths:

Abu Hurayrah (may Allah be pleased with him) reported that the Prophet (peace and blessings be upon him) said, “In the sight of Allah, Glorified and Exalted be He, nothing is more honorable than du`aa’.” (Reported by At-Tirmidhi)

“Verily, the most virtuous act of worship is du`aa’.” (Reported by Al-Bukhari)

Abu Hurayrah (may Allah be pleased with him) reported that the Prophet (peace and blessings be upon him) said, “Whoever does not ask Allah, will incur Allah’s wrath upon himself.” (Reported by At-Tirmidhi)

Ibn Mas`ud (may Allah be pleased with him) reported that the Prophet (peace and blessings be upon him) said, “Beseech Allah to shower His Bounty upon you, for Allah loves to be besought.” (Reported by At-Tirmidhi)

Following are some points of etiquette that one who makes du`aa’ is recommended to strictly adhere to: