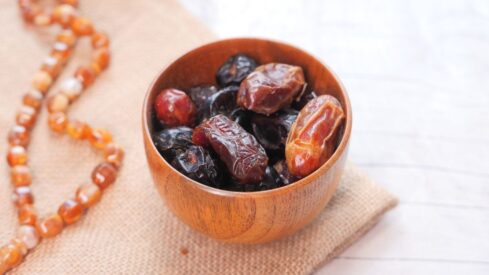 1-Abstaining from Acts that Break The Fast:

This point is based on the Qur’anic verse: “Eat and drink until the white thread becomes distinct to you from the black thread of the dawn. Then strictly observe the fast until nightfall.”

It is also based on the following Hadith: “When the verse ‘Eat and drink until the white thread becomes distinct to you…’ was revealed, I took a black thread and a white thread and placed them underneath my pillow. During the night I looked at them to see if I could distinguish between them. In the morning I went to the Messenger of Allah and mentioned that to him and he said: ‘It is the black of the night and the white of the day.'”

Allah instructs in the Qur’an: “And they are ordained nothing else than to serve Allah, keeping religion pure for Him.” The Prophet, peace and blessings be upon him, said: “Actions are judged according to the intention behind them, and for everyone is what he intended.”

The intention must be made before Fajr and during every night of Ramadan. This point is based on the Hadith of Hafsah, which reported that the Prophet said: “Whoever does not determine to fast before Fajr will have no fast (that is, it won’t be accepted).” (Related by Ahmad, An-Nasa’i, At-Tirmidhi, Abu Dawud, and Ibn Majah. Ibn Khuzaimah and Ibn Hibban have classified it as Authentic.

The intention is valid during any part of the night. It need not be spoken, as it is in reality an act of the heart, which does not involve the tongue. It will be fulfilled by one’s intention to fast out of obedience to Allah and for seeking His pleasure.
If one eats one’s pre-dawn meal (Sahoor) with the intention of fasting and to get closer to Allah by such abstinence, then one has performed the intention. If one determines that one will fast on the next day solely for the sake of Allah, then one has performed the intention even if a pre-dawn meal was not consumed.

According to many of the jurists, the intention for a voluntary fast may be made at any time before any food is consumed. This opinion is based on `A’ishah’ s Hadith: “The Prophet came to us one day and said: ‘Do you have any [food]?’ We said, ‘No.’ He said: ‘Therefore, I am fasting.” (Recorded by Muslim and Abu Dawud.)