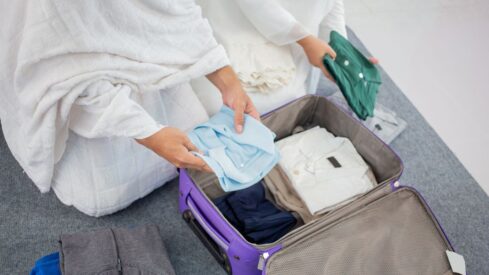 I admit it. I’m human. And because I’m human I like to think that I’m in control, and even that I control others (“Yes, you will eat your spinach”). I fall into the habit of thinking that I will wake up in the morning and go to work, rarely remembering that I could die at any minute. I think that my employer couldn’t live without me, that I always have to know what’s scheduled for the next few days, that if I travel I have to have hotel reservations ahead of time, and on and on. You get the picture.

But for a few days I came out of that trap and was able to let go—that was Hajj.

It was on the second day of the Hajj, while we were at `Arafah, that the transformation started. It was a Friday and our group leader was giving a khutbah (sermon). He spoke about Hajar (may Allah be pleased with her), the wife of Prophet Ibrahim (Abraham, peace be upon him) and mother of Isma`il (Ishmael, peace be upon him). When her son was just an infant, Ibrahim left them in the desert in the place that would become the city of  Makkah. She ran after Ibrahim and asked if this was from Allah. Had He ordered Ibrahim to do so? He just nodded and walked away, without even looking back. She declared that she would trust in Allah to provide for her.

The rest is history, as they say. While running back and forth between two hills to find water, the baby kicked the sand and the water of Zamzam sprung out of the ground. That water is still flowing today, and Hajar’s running between the hills is commemorated by the Hajj ritual known as Sa`i.

Now that woman had faith! Me, I would have run screaming after my husband, probably calling him names, screaming that he didn’t love me, then kicking and dropping to the ground crying in despair.

But Hajar was able to let go of any pretense of having control and just trust in Allah.

And what about Ibrahim? He didn’t even turn back to her but kept walking. My first impression is that he seems to have been very cold, hardhearted—but on reflection, I think he must have been suffering, too, but he was letting go, giving up any notion that he could provide for his wife and child and entrusting them to Allah.

And then years later, when Ibrahim had a vision of himself sacrificing Isma`il, he was willing to let go of his beloved son.

And my own experience? Before we left `Arafat for Muzdalifah, I felt a spiritual “cleansing” that is hard to describe. It was as if all the evil had been drained out of me and instead I was filled with light and happiness. (There’s more to it, but I’ll save it for another time.) Our group was going to spend only a few hours in Muzdalifah, but my husband wanted to spend the night there, as that was the sunnah.

We had only a bottle of drinking water and another bottle of water for washing for ablution—there were no toilet facilities in Muzdalifah. We slept in the open on a sheet.

Late the next day, after we had thrown the pebbles at the Jamarat, it was time to make Tawaf of the Ka`bah in Makkah. By that time I had suffered from heat exhaustion and had developed tendonitis in my hip that made it extremely painful and difficult to walk—limp is more the word.

At the Sacred Mosque I decided to make Tawaf upstairs rather than on the ground close to the Ka`bah because the heat and crowd were too much for me. Upstairs there were ceiling fans and the people spread out. (It was only afterwards, when seeing a photo, that I realized that—stupid me—by doing so I had had to limp about ten times the distance of Tawaf on the ground level!) But there was one corner where the way constricted, so there was always a bottleneck and a crush of people. Every time I got to that point, I imagined myself fainting (or worse). What would I do? What if I got trampled? And then I relaxed and said that I would just give myself up to Allah if I did, just fall into His hands.

Well, of course, if I did pass out or die in the crush I would lose any control, wouldn’t I? But I had to let go of any feeling, any pretending to be in control. And that was a great spiritual exercise, something that is hard to repeat in the rush of everyday life.

So here I am, 14 years later, still pretending I’m in control of my life. In these days before `Eid Al-Adha I have to take time out to remember my own Hajj experience and remind myself that I have to depend totally on Allah for everything—even for every breath I take, every keystroke I make as I write this. And now if the electricity doesn’t cut and if I can get an Internet connection fast enough, I can e-mail this to the editor before I rush off to work—in sha’ Allah (Allah willing).