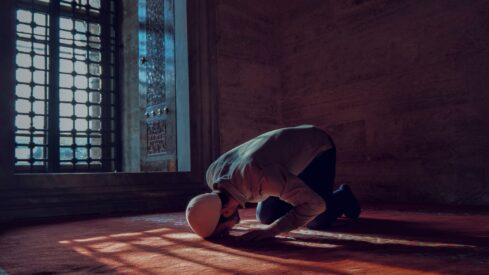 “Hayya” is an earnest request to people of all nations, races, gender, social status, and color to come together to establish the prayer. As Salah is the ritual prayer of Muslims. A special part of the Salah is reciting Surah al Fatiha during which Allah turns to the slave and answers for each verse recited.

The invitation here is to connect to Allah who “is the light of the heavens and the earth” which means that He is a Guide to the inhabitants of the heavens and the earth (Ibn Abbas). The second part is the invitation of “Falah” which means victory. These words of the Adhan (Call for Prayer) convey the message of victory in this world and the hereafter by establishing a connection with Allah through prayer.

Laa hawla wa laa quwata illa billah (there is neither might nor power except with Allah).

The answer to this call by the believers is an act of submission to Allah, an affirmation of His Oneness, and Unique Attributes. The believers come together to pray in the Masjid and stand side by side forgetting all their differences. Thus, the Masjid becomes a place of gathering for people of all races and colors, and the prayer becomes a practical embodiment of Tawheed. Muslims all around the world are called for prayer with the message of Tawheed five times a day.

Qudamah ibn Muzuhun (RA) narrates that the Messenger of Allah (PBUH) indicated to Umar and said, “This is the lock of tribulation.” And he said, “He (UMAR) remains between you and tribulation as a strong locked door between and he does not live amongst them.” Al-Tabarani and Al-Bazzar.

Hence, it is not unusual that Umar (RA) had the dream regarding Adhan which calls Muslim to unite together for salah with the words- Hayya ‘ala Salah, Hayya ‘ala al Falah. (Come to the Prayer, come to the Success).