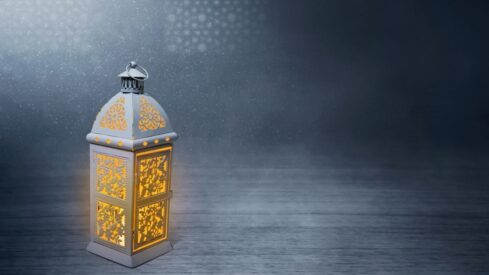 Abu Hurairah reported that the Prophet (peace and blessings be upon him) said:

Fasting is a shield. Let no one who is fasting commit any obscenity or foolishness. Should anyone engage him in a fight or a slanging match, let him answer him by saying: I am fasting, I am fasting.

It is well known that fasting in the month of Ramadan is one of the main duties Islam lays down for its followers. Some scholars consider these duties as pillars on which the structure of Islam is built. It is needless to say that fasting in Ramadan ranks on par with Prayer and zakah in its importance as a main Islamic duty. Indeed, it enjoys a special status, since it can only be fulfilled through abstention, rather than through a direct or positive action. For this reason, Allah is quoted by the Prophet (peace and blessings be upon him) as saying in a hadith qudsi, “Everything a human being does is his, with the exception of fasting, which belongs to me and I reward it accordingly” (Al-Bukhari). This is due to the fact that there are no apparent signs which indicate that a person is fasting.

Islam is a religion with a keen sense of moral values. This is reflected in a serious moral code which all Muslims are supposed to observe. Good manners, politeness, kindness to others, and keeping away from everything which is not conducive to good social relations are also part of the Islamic code of conduct. There are however certain aspects of morals and manners which are particularly associated with certain acts of worship. It is appropriate to consider here what sort of social values are associated with fasting. The Prophet (peace and blessings be upon him) said:

Fasting is a shield. Let no one who is fasting commit any obscenity or foolishness. Should anyone engage him in a fight or a slanging match, let him answer him by saying: I am fasting, I am fasting.

The Prophet (peace and blessings be upon him) gives fasting a very apt description when he considers it as a shield, protecting the person who fasts from the fire of hell. Indeed, fasting provides protection in more ways than one. Like fasting weakens the body, it also weakens sinful desires. This makes the fasting person more able to resist any temptation to commit any sin. Since man always feels the temptation to fulfill his desires through any available means, whether legitimate or not, these desires are weakened through fasting, which proves the protective aspect of this unique act of worship.

The other protective effect of fasting is seen in the fact that Allah rewards fasting very generously. It is well known that Allah rewards any good action by at least ten times its value. He multiplies the reward even more to the extent that He rewards some good actions by 700 times their value. This figure, however, is not a ceiling for Allah’s reward. He may reward good actions much more generously. We human beings are not the judges, it is Allah alone who is The Judge and will reward accordingly. Imam Malik relates the following hadith, which has been related by others in different forms:

Every action a human being does shall be multiplied—a good action by ten times its value, up to 700 times and even more as Allah may wish. Allah says: With the exception of fasting, which belongs to Me, and I reward it accordingly.

What is very clear here is that the exception is made in order to stress the greater value of fasting and the greater reward it earns. Allah makes the exception and attributes it to Himself. He emphasizes that fasting is offered purely to Him. He therefore responds by rewarding it more generously than any other action. This is confirmed by a Qur’anic verse that states [The steadfast shall be given their reward without reckoning] (Az-Zumar 39:10).

The absence of reckoning signifies the fact that the reward is limitless. Most scholars and commentators on the Qur’an interpret the term “the steadfast” in this verse as referring to those who fast. For fasting can only be offered if a person has strong faith. What Allah wants us to understand here is that He accepts this act of worship that is dedicated to Him since it cannot be done with false intentions, and He rewards it, not on the basis of its value, but on the basis of His generosity which is without limit.

Moreover, Allah rewards much more generously any good action done by the human being who is fasting. Such rewards help shield the person who fasts against the fire of Hell. Since on the Day of Judgment, good actions are balanced against bad ones, the multiplied reward gained through fasting appears to be of much greater value. If a person’s good actions fall short of what he needs to offset his sins, he will find that good actions in Ramadan will benefit him immeasurably because Allah has attached to them a great value. This is the protection fasting provides for man.

During fasting, we are specifically required to abstain from any obscenity. In fact the verb used here by the Prophet (peace and blessings be upon him) refers to obscene conversation, sexual intercourse and its preliminaries, as well as talking about intercourse with anyone. This is because fasting means abstention, not only from eating and drinking, but also from sex. While conversation about food and drink is not prohibited during the day of fasting, we have the restriction on talking about sex, since such conversation can hardly be conducted without falling into obscenity.

We are also required not to act in a foolish manner. The Arabic term used here refers particularly to shouting and raising one’s voice in an unbecoming manner. In some versions of this hadith, the term used refers specifically to indulging in any verbal dispute and raising one’s voice. The person who fasts is supposed to behave in a very decent way, even with those who try to quarrel with him.

This is re-emphasized by the rest of the hadith, which addresses itself to the case when a person who is fasting finds himself drawn into a verbal battle or a slanging match. He is told not to respond. What he should do is to make it known to the other person that he is fasting. By such a declaration, he actually tells his opponent that he refuses to be drawn into such a verbal quarrel because he has made up his mind to observe the manners required of people who are fasting. In a situation like the hadith describes, a fasting person tries to resist being drawn into a quarrel by saying “I am fasting.” He says it to the other party in clear terms if this happens in Ramadan when every Muslim is supposed to fast. This serves as a reminder to the other party, if he is Muslim, about the code of conduct in Islam that requires a person to abstain from quarrels, especially when fasting.

If the situation arises when one is fasting voluntarily or outside Ramadan, then it is preferable to make the statement “I am fasting” to oneself. This serves as a reminder to oneself that one must not be drawn into such a situation. It also prevents any possibility of boasting about one’s fasting, should one make this statement aloud. Indeed, the other person may touch on this statement and accuse him of boastfulness, which may lead in turn to an even worse dispute.