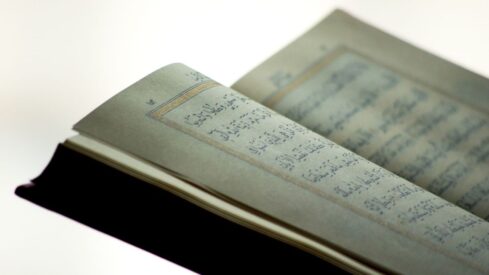 It is a common allegation by Christians that the Qur’an is a mere copy of the Bible; that Prophet Muhammad (peace and blessings be upon him) simply plagiarized “his” book from the pages of the Bible.

It is true that Prophet Muhammad received the Qur’an AFTER the Bible came into existence; and it is also true that the books of the Bible and the Qur’an cover much common ground. But the conclusion of the Christian critics that the Prophet had studied the Bible with a view to copying its verses in order to somehow fabricate the Qur’an is absurd and untenable for the reasons discussed below.

First, there was no Arabic translation of the Bible available during the Prophet’s time, as Ernst Würthwein informs us in his book, The Text of the Old Testament:

With the victory of Islam the use of Arabic spread widely and for Jews and Christians in the conquered lands it became the language of daily life. This gave rise to the need of Arabic versions of the Bible, which need was met by a number of versions mainly independent and concerned primarily for interpretation. (Würthwein 104)

Thus, the first translations of the Hebrew Bible in Arabic appeared after the advent of Islam. In fact, the oldest dated manuscript of the Old Testament in Arabic dates from the first half of the ninth century.

What about the New Testament?

Sidney H. Griffith, who has done extensive research on the appearance of Arabic and the New Testament says that

The oldest dated manuscript containing the Gospels in Arabic is Sinai Arabic MS 72. Here the text of the four canonical Gospels is marked off according to the lessons of the temporal cycle of the Greek liturgical calendar of the Jerusalem Church. A colophon informs us that the MS was written by Stephen of Ramleh in the year 284 of the Arabs, i.e., 897 AD. (Griffith 131–132)

And Prophet Muhammad had died in the first half of the seventh century, to be specific, in 632 CE.

Second, it would be ironic if the unlettered Prophet Muhammad could have studied and assimilated all the sources—Christian, Jewish, Zoroastrian, Hanif, and ancient Arab beliefs—before he compiled the Qur’an. Indeed his illiteracy was acknowledged even by the enemies of Islam 1,400 years ago. And there is no record of the pagan Arabs in Makkah accusing Muhammad of pretending to be illiterate while actually being literate.

Allah the Almighty also answered this in the Qur’an:

[And thou wast not [able] to recite a Book before this [Book came] nor art thou [able] to transcribe it with thy right hand: in that case indeed would the talkers of vanities have doubted. Nay here are signs self-evident in the hearts of those endowed with knowledge: and none but the unjust reject Our signs.] (Al-`Ankabut 29:48–49).

Third, the language of Muhammad was Arabic and the Qur’an was revealed to him in Arabic. It is the original Arabic Qur’an that is always called the Qur’an, not any translation. But the language of the Old Testament was ancient Hebrew, and Jesus was a Jew who spoke Aramaic, which was a dialect of Hebrew, an Eastern Semitic language. But the books of the New Testament, including the Gospels, were written in Greek, a Western language, some time after Jesus Christ.

The Bible is a collection of writings produced at different points in history and authored by different writers. The many denominations of Christianity do not agree on the canon (the list of books accepted by the church as authoritative or divinely inspired) of the Christian Bible. Some of these books are not universally accepted. The Catholic Encyclopedia has this to say on the topic:

The idea of a complete and clear-cut canon of the New Testament existing from the beginning, that is from Apostolic times, has no foundation in history. The Canon of the New Testament, like that of the Old, is the result of a development, of a process at once stimulated by disputes with doubters, both within and without the Church, and retarded by certain obscurities and natural hesitations, and which did not reach its final term until the dogmatic definition of the Tridentine Council. (“Canon of the New Testament”)

As for the story of Jesus, there were at least 50 gospels written in the first and second century CE. Four of them (Mathew, Mark, Luke, and John) were included in the official canon during the fourth century CE and are found today in every Bible. All of the original copies of the gospels were lost. What we have now are handwritten copies, which are an unknown number of replications removed from the originals.

Rudolf Bultmann, a prominent 20th-century professor of New Testament studies writes about the life of Jesus:

We can now know almost nothing concerning the life and personality of Jesus, since the early Christian sources show no interest in either, are moreover fragmentary and often legendary; and other sources about Jesus do not exist. (Bultmann 8)

The earliest of the four gospels is Mark’s and this was written sometime from 57 to 75 CE, according to scholars. The other gospels were composed much later than this, and the last of the four Gospels (John’s) was probably written between 85 and 100 CE. All these gospels were originally in Greek and their authorship is a subject of dispute.

The Bible does not contain self-reference; that is, the word Bible does not occur in the Bible. In fact, only certain Christian groups believe that the Bible — in its entirety — is the revealed word of God. The presence of so many contradictions and patently questionable ideas makes this claim untenable.

In comparison, the Qur’an’s claim to be the record of the word of God dictated to His Prophet is borne out by the following facts: The speaker in the Qur’an is God talking directly to man, while the sayings of the Prophet, called Hadith, are in other books. The Qur’an repeatedly says that it is the word of God. It has self-reference; that is to say, it names itself 70 times as the Qur’an.

The verses of the Qur’an were revealed to Prophet Muhammad in the course of 23 years of his life as the events in the unfolding development of the religion of God called for divine guidance. As soon as the Prophet received these verses, he dictated them to his disciples, who not only wrote them down, but also learned them by heart. There were so many people who had memorized the Qur’an that we can say that from the first day of its revelation, the Qur’an was in the hands and hearts of the people.

Before the death of the Prophet, the whole of the Qur’an was written down, examined, and verified by the Prophet himself. From that time onwards, it has remained safe from corruption, as several copies of it were in the possession of the Muslims. It was not possible to make any changes to its verses, even if someone wanted to do so, because a standard copy was preserved. Further, so many Muslims had memorized the Qur’an that they would have recognized any changes. Moreover, God has promised in the Qur’an [Certainly, it was We Who revealed the Reminder (the Qur’an) and certainly We shall preserve it] (Al-Hijr 15:9).

One of the foremost reasons for the Qur’an’s continued incorruptibility is that it has been preserved in its original language, unlike the Bible. No one in the Muslim world has ever thought to supersede it with a translation. Thus the Qur’an we have today is the same Qur’an that the Prophet received from God. Its authenticity and genuineness therefore, are unimpeachable.

One of the miracles of the Qur’an, which was revealed 14 centuries ago, is the fact that it can be read and understood by the Arabic-speaking people living today. Every language undergoes changes as time passes, and one or two hundred years is long enough for a language to undergo substantial changes. Thus anyone who knows the rudiments of the history of languages knows that logically it should be impossible for the Arabic-speaking peoples of today to read and understand a book 14 centuries old. And yet, every day, every hour, every minute, in fact every second of the 24 hours of the 365 days of every year of the past centuries has been alive with the reading and study of the Qur’anic verses. And it goes on into the future. The volume and scope of it multiplies in every imaginable way with the coming of the multimedia. This started at the time of the Prophet and it has continued unceasingly till the present day, making this the ever-present miracle of Prophet Muhammad rivaling all other miracles.

Allah says [This is the Book; in it is Sure Guidance, no doubt, for those who are God-conscious] (Al-Baqarah 2:2) In another verse we read [And say: “The Truth has arrived, and Falsehood perished; for Falsehood is bound to perish”] (Al-Israa‘ 17:81).

Griffith, Sidney H. “The Gospel in Arabic: An Enquiry into Its Appearance in the First Abbasid Century.” in Oriens Christianus, volume 69, pp. 131-132.

** Professor Shahul Hameed is a consultant for the Discover Islam section in IslamOnline.net. He also writes occasionally for other sections. He was formerly the president of the Kerala Islamic Mission in Calicut, India. He is the author of three books on Islam published in the Malayalam language. His books are on comparative religion, the status of women, and science and human values.