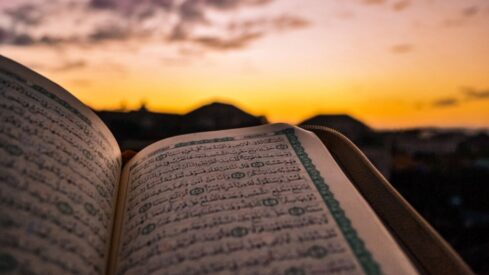 Allah, the Creator, has not only brought about the creation, but continues to sustain and direct it in the way that He has created humans and all that is around them. He has provided many forms of guidance, indeed, a system of guiding principles, a part of which are the laws of nature.

But Almighty Allah has also granted a special form of guidance for mankind from the outset of its occupancy of the earth. He promised Adam and his descendants,

{Go down, all of you, from hence. But verily there cometh unto you from Me a guidance, and whoso follow My guidance, there shall no fear come upon them neither shall they grieve. } (Al-Baqarah 2:38)

This guidance comes through the prophets that were continuously sent by Allah to mankind until the final messenger, Muhammad (peace and blessings be upon him), received His final guidance.

We call a man to whom Allah, in His own way, grants His guidance, a prophet (nabi) or messenger (rasul ). Prophets receive the word of Allah through revelation, and then communicate it to their followers. In the Qur’an, Allah says,

{Surely We have revealed to you as We revealed to Noah and the Prophets after him, and We revealed to Abraham and Ishmael and Isaac and Jacob and the Tribes and Jesus and Job and Jonah and Aaron and Solomon, and to David We gave the Psalms, and Messengers We have mentioned unto you before and Messengers We have not mentioned unto you, and Allah spoke directly unto Moses — Messengers of good cheer and of warning, in order that mankind might have no argument against Allah after the Messengers, and Allah is Ever Mighty, Wise. } (An-Nisaa’ 4:163–165)

The word revealed refers to the Arabic root wahi, which means inspiration.

Meaning and Forms of Wahi

The Arabic verb awha (revealed), from which the noun wahi (revelation) is derived, occurs in a number of shades of meaning in the Qur’an, each of them indicating the main underlying idea of inspiration: directing or guiding someone. The following examples show some of these types of wahi.

Guidance in natural intuition. Almighty Allah says, {And We inspired the mother of Moses} (Al-Qasas 28:7).

Guidance in natural instinct. Almighty Allah says, {And your Lord inspired the bees, saying, “Choose you habitations in the hills and in the trees and in that which they thatch. } (An-Nahl 16:68).

Guidance by signs. Almighty Allah says, {Then he (Zakariyah) came forth unto his people from the sanctuary, and signified (inspired) to them, “Glorify your Lord at the break of day and the fall of night.” } (Maryam 19:11)

Guidance against evil. Almighty Allah says, {Thus have We appointed unto every Prophet an adversary: Devils of humankind and jinn who inspire in one another plausible discourse through guile. } (Al-An`am 6:112)

Guidance from Allah. Almighty Allah says, ((Remember) when your Lord inspired the angels, (saying), “I am with you.” ) (Al-Anfal 8:12)

Wahi, in the sense of revelation, refers to Allah’s guidance for people that was sent down via the prophets, who received it through one of the means mentioned in the following Qur’anic verse:

{It is not fitting for any man that Allah should speak to him except by inspiration, or from behind a veil, or by sending a messenger to reveal, with Allah’s permission, what Allah wills, for He is Most High, Most Wise. } (Ash-Shura 42:51)

From this verse, it is obvious that any prophet must have received the revelation through one of the following means:

1. Inspiration, for example, in a dream as that which Ibrahim received while asleep, to sacrifice his son.

2. Speech hidden away, as Allah spoke to Moses.

3. Words (speech) sent from Allah through a special messenger as the Angel Gabriel was sent to the Prophet Muhammad (peace and blessings be upon him). That is the common way of wahi.

The Qur’an Revealed to Muhammad

Prophet Muhammad (peace and blessings be upon him), the last of Allah’s messengers, received the revelation of the Qur’an through a special messenger sent by Allah for this purpose: the Angel Gabriel, who recited to him Allah’s exact words.

The Descent of the Qur’an

According to many Muslim scholars like As-Suyuti on the basis of three reports from `Abdullah ibn `Abbas, in Al-Hakim, Al-Baihaqi, and An-Nasa’i, the Qur’an descended in two stages:

• From Al-Lawh Al-Mahfuz (the Well-Preserved Tablet) to the lowest of the heavens (Bayt-ul-`Izzah) of the world, all together, on Laylat Al-Qadr (the Night of Power).

• From the heavens to earth in stages throughout the 23 years of Muhammad’s prophethood, starting on Laylat Al-Qadr of Ramadan, through Angel Gabriel.

The revelation of the Qur’an began on Laylat Al-Qadr of Ramadan, after the Prophet Muhammad had passed the 40th year of his life (that is around the year 610), during his seclusion in the cave of Hiraa’ on a mountain near Makkah.

`A’ishah, the Mother of the Believers, narrated, “The commencement of the divine inspiration to the Prophet (peace and blessing be upon him) started in the form of good dreams which came true like bright daylight, and then the love of seclusion was bestowed upon him. He used to go in seclusion in the cave of Hiraa’ where he used to worship Allah alone continuously for many days before his desire to see his family. He used to take enough food for many nights and then come back to (his wife) Khadijah to take his food likewise again. Suddenly the truth descended upon him while he was in the cave of Hiraa’.

The narration goes on to tell us that the Prophet went back to his wife Khadijah and recounted to her his dreadful experience. She comforted him and both of them consulted Waraqah ibn Nawfal, Khadijah’s relative and a learned Christian, about it. Waraqah told Muhammad that he had encountered the very one whom Allah had sent to Moses, and that he would be driven out by his people.

“Sometimes it is “revealed” like the ringing of a bell, this is the hardest of all, and then it passes off after I have grasped what is inspired. Sometimes the Angel comes in the form of a man and talks to me and I grasp whatever he says.” (Al-Bukhari)

The first revelation that Prophet Muhammad received is the first verses from Surat Al-`Alaq:

The Pause of Revelation

After the first message was received, revelation ceased for a certain period, known as fatrah in Arabic, and then it was resumed:

While talking about the period of pause in revelation, Jabir ibn `Abdullah Al-Ansari reported that the Prophet said, “While I was walking, all of a sudden I heard a voice from the heaven. I looked up and saw the same angel who had visited me at the Cave of Hiraa’ sitting on a chair between the sky and the earth. I got afraid of him and came back home and said ‘Wrap me (in blankets). ” Then Allah revealed the following verses: {O you who have wrapped up in your garments! Rise to pray in the night except a little, half of it, or lessen it a little.}) After this, revelation came strongly and regularly.” (Al-Bukhari).

The second portion of the Qur’an revealed to Prophet Muhammad (peace and blessings be upon him) was the beginning of Surat Al-Muddaththir:

{O you wrapped up (in the mantle)! Arise and warn, and your Lord do you magnify, and your garments do purify, and uncleanness do shun. } (Al-Muddaththir 74:1–5)

Revelation Sent Down in Stages

The Qur’an was revealed in stages over a period of 23 years, and not as a complete book in one single act of revelation. There are a number of reasons for this, of which the most important are the following:

• Considering the Prophet’s well-being, since revelation was a very difficult experience for him.

• Making understanding, application, and memorization of the revelation easier for Muslims.