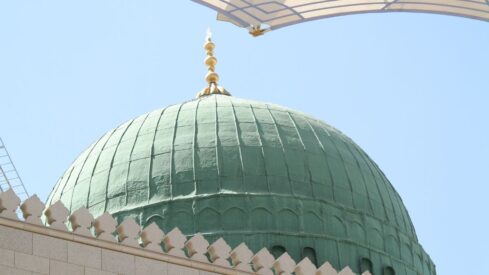 Prophet Muhammad… What words spring into your mind upon hearing his name?

The example for all other men?

The best of the ummah?

Or do you think of him as a polygamist?

Born Muslims are born into a faith and a family that heavily and rightly so encourages them to love the Prophet. They are born surrounded by his love and teachings from their parents’ daily practices to the teachings they get at school or at a madrassa.

The Prophet is incorporated into the lives of many born Muslims to the extent that the love they have for him could be compared to the love a child has for his/her mother. The Prophet has taught us, guided us through many centuries and generations and although they may not have met him personally they feel like he is part of their family and their love for him is unconditional and unquestionable.

When you revert back to Islam you have that new firm belief from knowledge and teachings you have read in the Quran because it is the word of God. However, you may not know an awful lot about our beloved Prophet (peace be upon him) because of all the negative connotations that the media supposedly thinks is associated with Prophet Muhammad which may be stuck in your mind. When the media attacks Islam, the Prophet is often the first target as he is the most obvious target to discredit our faith.

However, you should know that when you take your shahadah, Prophet Muhammad is very important to your faith as you declare your belief in him as God’s final messenger.

When I Reverted to Islam

When I reverted back to Islam a few years ago, I bought a basic book about the life of Prophet Muhammad because no one will expect you to know everything about him in the beginning. This book helped me to dissipate some of the negative connotations attached to the Prophet.

For example with sunnah prayers I often thought that you were praying to the Prophet not following his example, so in the beginning I never prayed my sunnah prayers because of this belief which could have been eradicated sooner had I learned and took a greater interest in the Prophet’s life, teachings and tradition.

Once you learn the basics, you realize the love you have for Prophet Muhammad and you also realize why you should try to follow his footsteps.

Once you feel that love, you will forget about of all those false and uneducated accusations made by the media about Islam and about the Prophet because you will know that Prophet Muhammad had a deep love for his ummah. He adopted children who were in need and was a living example of the book we believe in, which heconveyed from God to humanity. As your faith grows, you will learn many hadiths about the Prophet and how important he is to Islam, to you and to humanity at large.

The media gives Islam bad coverage due to recent wars and current events, and obviously people are not there to see what is actually going on, so they will take journalists’ word for it, but don’t forget that most of these are “patriotic” newspapers who don’t want to shine a bad light on their people. If you really want to know how the Muslims will and should conduct themselves in war then you should do research into the battle of Badr, or read how the Muslim ummah conducted itself in the time of Saladin instead of taking the word of an opinionated journalist.

Prophet Muhammad held many values that many people have forgotten or dismissed and that society is now lacking. Through learning about Prophet Muhammad (peace be upon him) you can learn some of the values he held and used to teach in order to be able to set the example as a Muslim and a believer in the last Prophet and insha’Allah help restore society to how it should be.

The Quran states that men and women were created to be equal parts of a pair. Prophet Muhammad in the Seventh Century said that the rights of women are sacred and that they are the “twin halves of men”. Considering women in Britain received the right to vote, inherit and own property thirteen centuries later, Muhammad’s teachings were both fundamental and revolutionary.

Although in most countries women are equal to a certain degree. In the UK, men still receive higher pay than women. An article published on the BBC news website confirms this:

The pay gap between men and women is exacerbated by bonus payments given to male managers which are on average double those for women, says the CMI. Male managers’ average bonus payments were £6,442 last year compared with £3,029 for women.

As the Prophet said women are the twin halves of men so please explain to me in a country that is so modern and in tune with the times then why does it seem that instead of progressing they are regressing?

Early Islamic history saw the establishment of Muslim women as scholars, politicians, businesswomen, jurists and doctors something that wasn’t allowed in the UK until late 1900’s.

Caring for Society and Environment

Not only did Prophet Muhammad promote the rights of women, he was a social activist believing and striving for justice and always encouraged maintenance of the planet and its environment.

In our times the environment is constantly abused and victimized by oil spillages, war, littering and hazardous substances. In the time of the Prophet these were few and the earth was a safer and healthier place to live.

I hope that having read this article you have learnt things that you didn’t know about Prophet Muhammad. If you are Muslim then I hope this article and reinforced the love you already have for Muhammad and boosted your faith.

For those non Muslims reading this article, I hope that this has eradicated some of the misconceptions surrounding Prophet Muhammad.

Always remember to do your own research or ask other Muslims about things that you’re not too sure about.

The Prophet Knew that the inner peace we sought in this life lies with the worship of Allah.