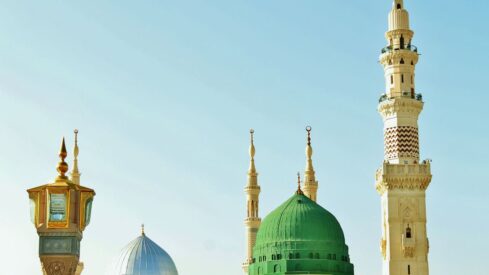 Human resources experts say that successfully leading a small group of people is not an easy task. Imagine for a moment the challenge Prophet Muhammad (peace be upon him) faced when he established the foundations of the first Muslim community first in Makkah, then in Madinah.

When Islam started to gain publicity, the few people who had embraced it in Makkah formed the nucleus of the first Muslim community. This small community was put to persecution at the hands of the people of Quraysh. The Prophet (peace be upon him) had to do something about this challenging situation. When the persecution intensified, he asked some of them to leave Makkah and migrate to Abyssinia where its king, Negus, gave them protection and welcomed them in his country.

As a responsible leader, the Prophet (peace be upon him) had a serious concern for his followers’ safety and he took wise measures to ensure that at least some of them were safe, far away from danger.

In Madinah, the Prophet (peace be upon him) declared that both the migrants (Al-Muhajirun) and the helpers (Al-Ansar) were brothers, and that they formed one community. The Prophet’s main goal in building this community was to strengthen their bonds of brotherhood in Islam.

He also wanted to ease the pain of the migrants and wanted the helpers to extend their hands to the new members of the community who had left their houses and properties behind in Makkah for the sake of Islam. This healthy and positive atmosphere was an important factor that led to the long-term success of the new Muslim community in Madinah.

Prophet Muhammad (peace be upon him) loved his companions and cared for them a lot. His care and concern covered even those who had died, as he was very keen for example to pay off their debts. When God made the Prophet wealthy through conquests, he said:

“I am more rightful than other believers to be the guardian of the believers, so if a Muslim dies while in debt, I am responsible for the repayment of his debt, and whoever leaves wealth (after his death) it will belong to his heirs.” (Al-Bukhari)

In what follows, I will shed more light on some other aspects of the Prophet’s wise leadership.

One of the famous companions, Bilal ibn Rabah, had a very beautiful voice, and the Prophet being aware of this gift declared Bilal to be his official mu’adhin (one who calls Muslims to prayer). On the other hand, the Prophet (peace be upon him) refused to offer another distinguished companion, Abu Dharr al-Ghifari, an administrative responsibility because he lacked the required skills.

Out of appreciation and motivation, Prophet Muhammad (peace be upon him) conferred some titles to his companions. For example, he told Abu `Ubayhdah ibn al-Jarrah:

“You are the protector of this nation.”

He said to Khalid ibn al-Walid:

“You are one of the swords of Allah.”

In a third occasion, he told Mu`adh ibn Jabal:

After embracing Islam, the family of Yasir was put to persecution and torture. In recognition of their sacrifice, the Prophet (peace be upon him) used to comfort them, and he promised them that their final abode will be in Paradise.

“There is no one who had done more favor to me with life and property than Abu Bakr.” (Al-Bukhari)

“I never saw anyone consult his companions more often than the Messenger of Allah.” (Ahmad)

The consultations had to do with matters on which there was no divine guidance in the Quran or the Sunnah. The Prophet (peace be upon him) did not go to the battle of Badr and the battle of Uhud for example without consulting his companions.

For example, the location of the battlefield of Badr was decided after Al-Habbab ibn al-Mundhir proposed it. The usual term used by Prophet Muhammad in these cases is: “Give me your opinion, O people.” This practice became a key characteristic of the nascent Muslim community for which they are praised in the Quran: {…and whose affairs are a matter of counsel…} (Ash-Shura, 42: 38)

Prophet Muhammad (peace be upon him) consulted his companions even regarding personal issues, like what happened when the news of the slander against his wife Aisha spread in Madinah.

“O people, give me your opinion regarding those people who made a forged story against my wife…” (Al-Bukhari)

Dealing Gently with His Companions

Gentleness is a key quality of Prophet Muhammad (peace be upon him). When he wanted to teach his companions, he used a very wise method which entailed both respect for the recipient of such knowledge without embarrassing him. One day a Bedouin urinated in the mosque, and the people ran to beat him. The Prophet (peace be upon him) said:

“Do not interrupt his urination (i.e. let him finish). Then the Prophet (peace be upon him) asked for a tumbler of water and poured the water over the place of urine.” (Al-Bukhari)

In another version, the Prophet (peace be upon him) called the man and explained to him that the mosques are not places for urine, but they are for offering prayer and worshipping God. This example takes us to the following point.

Let us first clarify that because we are human it is normal that we make mistakes. What is more important is learning from our mistakes and not repeating them. Prophet Muhammad (peace be upon him) confirmed this meaning in his famous hadith which reads:

“Every son of Adam makes mistakes, and the best of those who make mistakes are those who repent.” (At Tirmidhi)

Following the Quranic guidance, Prophet Muhammad (peace be upon him) applied the same methodology when correcting his companions’ mistakes because he felt that it is his duty to do so, being the chosen Prophet (peace be upon him) to guide people to God.

While correcting his companions’ mistakes, the Prophet (peace be upon him) considered different factors. The approach differed from one situation to another and from one person to another. Dealing with someone who often makes mistakes is different from dealing with one who makes a mistake for the first time. The kind of mistake is also determinant in the kind of treatment. Priority is given to mistakes which have to do with peoples’ belief. Situations which involve everyday life or etiquette come in second place.

When the Prophet (peace be upon him) wanted to teach his companions something, he used to introduce the topic by telling them that:

“O boy! Mention the Name of Allah and eat with your right hand, and eat of the dish what is nearer to you”.

Since then I have applied those instructions when eating.” (Al-Bukhari)

‘Do you have camels?’

He said: ‘What color are they?’

He said: ‘Are there any gray ones among them?’

He said: ‘There are some gray camels among them.’

He said: ‘Perhaps it is hereditary.’

He said: ‘Perhaps this is hereditary.’ And he did not permit him to disown him. (An-Nasa’i)

Respecting the Feelings of His Companions

“The best condiment is vinegar.” (Muslim)

This reaction reflects the Prophet’s wisdom. He did not want to hurt the man’s feeling because of his poor condition.

It is because of this wisdom and these refined skills that the Prophet (peace be upon him) managed to gain this large number of followers, and to successfully convey God’s message to the world. And because of his refined manners and wise leadership, the companions deeply loved the Prophet and were ready to sacrifice their lives to save him.

“You will be with those you love.” (Al-Bukhari)

Now, it’s our turn. Muslims are told in the Quran that they have in the Prophet Muhammad (peace be upon him) the most beautiful pattern of conduct:

{Verily there is for you a good example in the Messenger of God for whoever hopes for [the encounter with] God and the Last Day, and remembers God often.} (Al-Azhab 33: 21)

It is now the Muslims’ turn to re-live the conduct of the Prophet (peace be upon him) and embrace it in their daily lives. If Muslims claim that they love their Prophet, they have to demonstrate this love by following the Prophet’s footsteps and his guidance in all walks of life; at home, at work, with their families, with relatives, with friends, with neighbors regardless of their race, faith, color or status.

If we sincerely love the Prophet (peace be upon him) and follow his guidance, Almighty God will love us, and we will be with him in the Herafter, and the closer to him in Paradise will be those who follow his example and are best in manners.