Islam in Namibia…Making an Impact 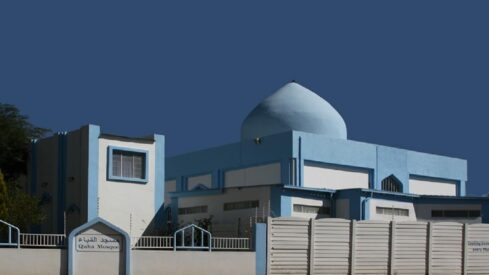 There are now seven mosques in the country. The first one was built in Katutura, said imam Ali.

WINDHOEK – It is a Friday afternoon at the Windhoek Islamic Center in Namibia’s capital. The center’s grounds are buzzing with activity. Over 50 men stand in front of the entrance, some normally dressed in pants and shirts, others more formal in the traditional Islamic wardrobe, the thowb; a white robe that almost reaches the ground.

What is interesting to note is that most of them are from the Nama tribe, one of Namibia 13 indigenous tribes, and they chat away in the language that is full of clicks and is difficult to comprehend for a foreigner.

This is no traditional mosque with its white bearded imam, but the other side of predominantly Christian Namibia.

The Adhan (call to prayer) is now the common call in most neighbors in this country of about 1.8 million people.

“We are like apples hanging in a tree crowded with pears,” youthful Imam Ali tells IslamOnline.net.

“But Islam has made a major impact here and our numbers are growing.”

Government statistics put the number of Muslims in the country at around 70,000, but Ali disagrees.

On why the religion has such a major following from the Nama, a tribe considered a minority, Imam Ali tells the story of Jacobs Salmaan Dhameer, the country’s incumbent Electoral Commissioner.

“Jacobs attended an Islamic Conference in Maseru (Lesotho) in 1980 and converted to Islam. He is the country’s first black Muslim,” he recalls.

“When he returned from the conference he spread the word to his own people, the Nama. That is why many of them are practicing Muslims.”

Until the early 80s, Islam was not known to the majority of the people, despite the existence of small enclaves of Muslims from the country’s southern neighbor South Africa who had settled in such coastal towns as Walvis Bay, Lüderitz and Swakopmund.

To date a core group of indigenous Muslims has started to grow in the country and individual Muslims area scattered all over Namibia, says Imam Ali.

“There are now seven mosques in the country. The first one was built in Katutura,” he said.

Katutura is Windhoek’s oldest black township, which was demarcated by South Africa, Namibia’s former colonial master, along the country’s 13 tribes.

A weekly session, which serves as a forum for development of attitudes and behavioral patterns and the ideological upward mobility of local Muslims, is one of the main activities held at the Windhoek Islamic Center.

Twenty-four Namibians are currently studying in Saudi Arabia. Others have been sent for long term Islamic training in institutions in South Africa.

Imam Ali said the Muslim faith attracts followers from all walks of life.

“Islam is based on logic, mentality, mathematics. Two plus two gives the same answer: four. Everywhere in the world, and it does not matter if we are friends or fed up with each other. This religion is based on wisdom; it is very simple to accept.”

Azi Kazombiaze, a 22-year-old practicing Muslim who reverted in 2000 after speaking to a friend who was already a Muslims, chips in.

“I asked him questions and read literature. At the time I was studying Christianity as well as Islam and it came to me to embrace Islam,” he said.

Kazombiaze says it was the clarity of the texts that attracted him, the beauty of the content and the style of writing.

When asked why so many Namibians choose Islam, he cites the unity and brotherhood of Muslims all over the world.

Wherever, whenever, across the world the same holy book, the Noble Qur’an, is used and the same language spoken during prayer.

“It is a perfect way of life. Islam is Islam. Although my parents had to get used to it, they now respect my choice,” said a happy Kazombiaze.

“But it came as a bit of a shock. Never did they imagine that Islam could change a person so much. Young Muslims are not like other teenagers that go out partying. We don’t smoke, nor drink alcohol and don’t get into trouble.”

He said that even some people who embraced Islam in prison “are now on the good path.”

Sayman reverted after meeting a person from Cape Town, South Africa, who told him about Prophet Muhammad (peace and blessings be upon him) and Islam.

“At first I just listened while he told me that Muslims eat halal food. What he told me and what I saw made me happy in my heart. It was all so nice.”

Muslims should only eat meat from livestock slaughtered by a sharp knife from their necks, and the name of Allah, the Arabic word for God, must be mentioned.

Now other goods and services can also be certified as halal, including cosmetics, clothing, pharmaceuticals and financial services.

Like Kazombiaze’s parents, Abdullah’s stood in awe of their son’s choice.

They had no knowledge at all about Islam. Their opinion has changed over the years as their son explained the religion to them.

“Islam has made an impact,” says Abdullah.

But major challenges remain. Muslim voices are hardly heard while Christians have airtime on state radio, television and columns in newspapers.

While the religion calls for going out and spreading the word of God, in Namibia this only happens in the mosques.

Why then does not the Muslim community, if it wants to be heard, establish its own mouthpiece? “A good question,” answers Imam Ali.

He said starting a magazine or a newspaper costs money and for that the help of Muslim businessmen is much needed.

“That will take a long time.”