Merciful to His Servants 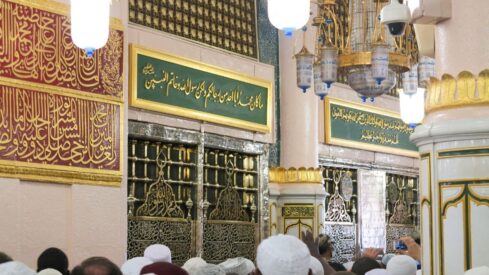 In Makkah, the home life of Prophet Muhammad (peace  be upon him) was generally comfortable. This was because his wife Khadijah (may Allah be pleased with her) ensured that he had all what he wanted. She was a rich woman who had her own business, sending merchandise with the traditional trade caravans the Quraish used to send in summer and winter to the Levant and Yemen.

When the Prophet immigrated to Madinah, he was not accompanied by any servants. Khadijah had died three years before the Hijrah to Madinah. The Prophet traveled with only his close Companion Abu Bakr. For the first few months after arriving in Madinah, the Prophet stayed in Abu Ayyub’s home, where he was served by the people around him. He never asked any of them for anything.

Long-Time Servant One of the Ansar (i.e., Muslims of Madinah) felt that the Prophet needed a personal servant. He took his stepson Anas ibn Malik (may Allah be pleased with him) to the Prophet and told him, “O Messenger of Allah! Anas is an intelligent lad. Let him serve you.” The Prophet accepted the offer. This was the beginning of a 10-year association of Anas with the Noble Prophet. At that time, Anas was only 10 or 12 years of age. He accompanied the Prophet to the last day of his blessed life, realizing that he could not have hoped for a better position. The Prophet’s household was such that no servant was at the receiving end of any abuse, physical or verbal.

As a young boy, Anas could be excused if, at times, he was negligent of what was assigned to him. The Prophet once sent him on an errand, but on the way, he saw some of his friends playing. The boy could not resist his desire to join them. He forgot his errand and was fully engaged in the play. Some time later, he felt someone pulling him tenderly from his robe.

Turning back, he saw the Prophet beaming. He told him endearingly, “Unays! [a diminutive form of Anas] Go where I sent you.” That was all the lightheaded child Anas received on this occasion. We can imagine how masters react if they see a servant playing in the street instead of attending to the business they were told to do.

Yet, the Prophet — who was sent as a source of mercy for all that exists — just smiled and told Anas to do the job he had been assigned. In fact, this was always the Prophet’s attitude toward all those who served him.

Prophet Muhammad was so kind to Anas and his family. In fact, he used to visit Anas’s mother and aunt and have a meal with them.

Anas’s mother once asked the Prophet to pray for Anas, a request which he fulfilled, praying to Almighty Allah “to give him wealth and children and to bestow His blessings upon him.” The mother was overjoyed with the Prophet’s supplication, realizing that her son would — Allah willing — have a good future. It was rooted in her awareness that the Prophet’s prayer was always to be answered. And it was: Anas later acquired wealth, and he saw scores of his children and grandchildren.

It is, therefore, not surprising that such an intelligent boy, Anas, should be a source of much of the information that reached us about the Prophet’s personal life. He was always with him.

Some visitors to Madinah remarked that they thought Anas and his mother belonged to the Prophet’s family, because of the frequency of their entry into the Prophet’s homes. Anas was one of the very few Companions of the Prophet who reported around 2,000 hadiths covering a wide range of questions and issues.

Forbearing and Caring That Prophet Muhammad should treat his servants well is not at all surprising; he was the perfect model of kindness. His mission is defined in the Noble Qur’an as a mercy for all creation. Servants are not a different human species. They are just like us, and therefore they should be treated well. The Prophet frequently urged his Companions — and his followers in subsequent generations — to treat their servants and all vulnerable groups well.

One day, the Prophet was calling for a maid in his household, and she was playing and did not respond. The Prophet got angry, yet he only said to her, “Had it not been for my fear of Allah’s retribution, I would have painfully hit you with this miswak” (As-Siuti). A miswak is a thin, short stick used as a toothbrush at that time. To hit someone with it will cause no pain. Despite that, the Prophet feared being liable to the punishment of his Lord, should he use it to punish that maid for her negligence. Could there possibly be any better form of education to all Muslims on kind treatment to servants and others who may be subject to our authority?

The Prophet also expressed interest in the personal affairs of his servants. He wanted them to have a comfortable life. One of them was Rabi`ah ibn Ka`b. Rabi`ah used to bring water to the Prophet for ablution in the morning, and he would serve him throughout the day. Every night, when the Prophet offered the `Isha’ Prayer and went to his family,

Rabi`ah would thoughtfully stay at his door, thinking to himself, “Something might happen, and the Prophet might need me.” He would go to sleep only when he realized that the Prophet went to sleep.

Rabi`ah related his experience as follows:

I was with Allah’s Messenger (peace and blessings be upon him) one night. I brought him water and what he required. He said to me, “Ask [for anything you like].” I said, “I ask for your company in Paradise.” The Prophet said, “Or anything else besides that?” I said, “That is all [what I look forward to].” Upon that, He said, “Then, help me to achieve this for you by engaging a lot in prostration.” (Muslim)

Realizing that Rabi`ah was unmarried, the Prophet, according to a narration recorded by Imam Ahmad, suggested to him that he should get married. The poor Rabi`ah replied, “Who will give me his daughter in marriage when I have nothing to give as dowry?” Sympathizing with him, the Merciful Prophet said to him,

“Go to the family of … [naming a particular family], and say to them, ‘I am the messenger of Allah’s Messenger. I am proposing marriage to your daughter.'” Rabi`ah did so, and the reply he received was, “welcome is Allah’s Messenger, and welcome is the man he sent.” They acted on the Prophet’s order and gave their daughter to Rabi`ah in marriage.

The Prophet collected a dowry in gold for him to give to his bride. He also arranged for a big sheep to be slaughtered for the wedding meal. And He instructed his wife `A’ishah to give all the barley she had at home for the gathering people.