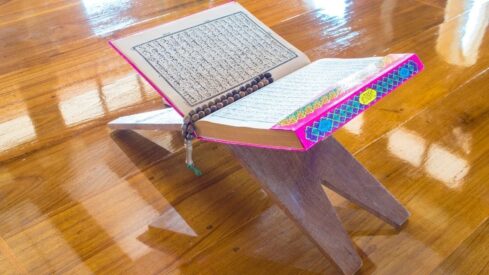 [Thus it is due to mercy from Allah that you deal with them gently, and had you been rough, hard hearted, they would certainly have dispersed from around you] (Aal `Imran 3:159).

Mercy is a divine characteristic manifested in human relationship through kindness and affection for others, in contrast to harshness and wicked intentions to friends and foes alike.

Rahmah (mercy) in Arabic literally means “womb” and as such the most merciful and compassionate link in human relationship is the mother. Islamically, whenever there is rahmah Satan disperses. Harshness or cruelty descends in the absence of rahmah.

A typical example from the Sunnah on this is the crowing of the cock and the braying of the donkey. We are told to pray “Allahumma inni as’aluka min fadlik” (Allah, I ask You for Your favor) when the cock crows, as angels are present, and “A`oodhubillahi min ash-shaytan ir-rajeem” (I seek refuge in Allah from the accursed Satan) when the donkey brays, as devils have arrived.

The more we become attached to the wonderful divine attributes of Ar-Rahman and Ar-Rahim, the greater will be our propensity for expressing mercy and compassion towards humanity.

Prophet Muhammad has been epitomized as the very embodiment of rahmah.

So intense was the mercy in this human perfection that even his greatest archenemies received mercy. He never killed anyone with his auspicious hands, in spite of being forced into battle several times.

We must beg Allah for His mercy. When the Prophet was seen crying for his deceased young son Ibrahim, someone was amazed that the Prophet cried! He (peace and blessings be upon him) retorted that weeping is the mercy of Allah.

Practically, mercy in Islam isn’t just a cliché for some academic presentation, nor is it jargon for some anti-war campaign, but it is institutionalized.

The secret behind Islam’s spread across continents and the harmonious interaction with cultures throughout its 1,400 years of existence is this innate intrinsic value of rahmah. Even animals are not exempted. The Prophet reprimanded his Companions for over-working camels, burning ants, and killing sparrows. On Al-Mi`raj, the miraculous ascension of the Prophet of Islam, Allah exposed a cruel, hardhearted woman who starved her pet cat to death and so wallowed in the flames of Hell.

The conquest of Makkah on Ramadan 20 provided an incomparable incident to show the true meaning of mercy for one’s enemies. After nearly 20 years of relentlessly tormenting the Muslims, the Quraish were defeated. They stood at the door of the Mercy of all the Worlds: Hind, who had chewed Hamzah’s liver; `Ikrimah, the son of Abu Jahl; Abu Sufyan, the war financer; and so on. But all the Prophet said was the same as Yusuf said to his brothers: “You are all free, there is no revenge against you!”

From the Christian students studying in the Moorish universities of Spain to the Sufi healers of Xinjiang; from the Rishis in Kashmir to the traditionalists in Mali; from the Malcom Xs of US prisons to the Cuffy fighters of Magdalenenburg (Guyana), the blend of mercy was the secret of the harmonious pact—godliness plus righteousness. Mercy binds us to Allah and Satan cannot infiltrate. Why? A merciful character is protection from the Hellfire.

Finally, on the Day of Judgment, Allah the Creator, Sublime and Pure, will announce to His slaves, “I was sick but you did not visit Me. I was naked, hungry and thirsty but you did not accede to My needs.”

Yes, Allah places Himself in the proximity of one who needs the mercy of society. Will you?