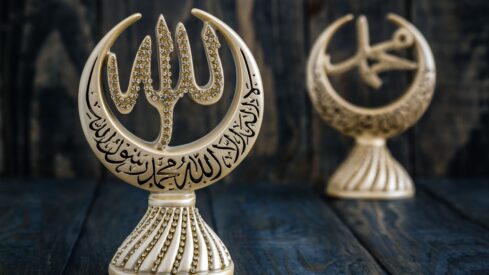 The light of this secret power is expressed outwardly as a rhyme of beauty; the beauty of the soul and that of actions. Our Prophet (peace and blessings be upon him) had the largest share of these.

Among his numerous good attributes humbleness and simplicity acquired a high and distinguished position.

Despite his position as leader, Prophet Muhammad (peace and blessings be upon him) never behaved as if he was greater or better than other people. He never made people feel small, unwanted or embarrassed. He urged his followers to live kindly and humbly. He released slaves whenever he could and gave charity, especially to very poor people, and orphans, without waiting for any reward.

Prophet Muhammad (peace and blessings be upon him) himself was never greedy. He ate very little and only ate simple food. He preferred never to fill his stomach. Sometimes, for days on end, he would eat nothing but raw food. He used to bind stones onto his belly to appease his hunger and considered milk as sufficient if he did not have any other food.

He slept on a very simple mattress on the floor and had almost nothing in the way of home comforts or decorations.

People used to ask his wife, `A’ishah, the daughter of his first and most loyal Companion, Abu Bakr, how he lived at home. “Like an ordinary man,” she would answer. “He would sweep the house, stitch his own clothes, mend his own sandals, water the camels, milk the goats, help the servants with their work, and eat his meals with them; and he would go and fetch what we needed from the market.”

He seldom had more than one set of clothes, which he washed himself. He was a home-loving, peace-loving human being. “When you enter a house, ask Almighty Allah to bless it,” he would say. He greeted others with the phase: as-salamu `alaykum – which means: “May peace be upon you” – for peace is the most wonderful thing on earth.

He accepted the invitation of both slaves and free men. He also responded to the invitation of widows and the poor even if he was presented with a cup of milk. He used to accept invitations to attend marriage ceremonies, and he attended the sick and the diseased as well as funerals.

He used to go to a distant place to see sick people and he loved perfume and despite any bad smell, he would sit with the poor and the destitute, eat with them, honor those possessing honor, advise them to do good deeds and show kindness to relatives. He did not treat anyone harshly and he accepted any excuse offered to him. At times he used to make jokes without speaking any falsehood and he never burst into laughter.

He played innocent sports and games that were lawful. He played with his wives and held races with them. He and his family members used to drink the milk of camels and goats and he would give them equal shares in food and clothing. He utilized all his time in a useful way. He did not hate the poor for their poverty, nor did he fear the kings for their mighty power. He used to call the people, high or low, towards Almighty Allah. Almighty Allah adorned him with all the qualities and good administrative abilities although he was illiterate. His boyhood was spent along with the shepherds and he used to graze sheep and goats. This was the custom of all the Prophets of Allah (peace and blessings be upon them all) and this taught him humbleness, patience, mercy and simplicity.

He used to let his servant ride behind him on any conveyance, whether it was a horse, camel or a donkey. Sometimes he walked barefooted, and sometimes he had no turban or cap on his head.

He use to say ” They (slaves or servants) are your brothers, and Allah has put them under your command. So the one under whose hand Allah has put his brother, should feed him of what he eats, and give him dresses of what he wears, and should not ask him to do a thing beyond his capacity. And if at all he asks him to do a hard task, he should help him therein.” (Al-Bukhari)

He never said no to his servants as his long time servant Anas (may Allah be pleased with him) remembers.

A few days before his death, he appeared before his companions in the mosque and said: “O people! Whoever of you whom I struck on his back, this is my back so let him strike me; whoever of you I have taken his wealth, I am here to pay him back.” To the surprise of the audience, a man stood up and said: “Yes you once pinched me on my tummy”. Smiling, Muhammad (peace and blessings be upon him) exposed his tummy and the man rushed to kiss it while crying. When he asked why he did that, he said: “I wanted my skin to touch that of the messenger of Allah”.

He was a firm believer with good manners. He always greeted people kindly, and showed respect to elders. He once said: “The dearest of you to me are those who have good manners.” (Al-Bukhari)

Above all, he was a man who practiced what he preached. His life, both private and public, was a perfect model for his followers.