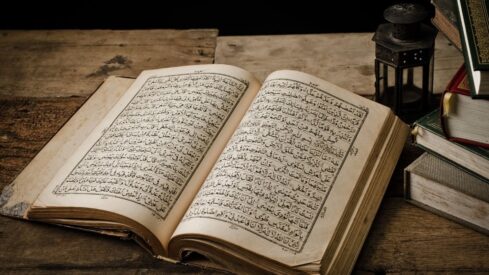 The following question was posed in relation with the references of Muhammad in Torah, the questioner said:

Also please could you assure me that Muhammad (peace be upon him) could not have in any way got his hands on the Bible. This would do wonders for my faith, please, as I am greatly troubled by this. I will be very grateful to you if you could provide me with my answers.

In response to the question, Nabil Haroun, a specialist in comparative religion and Islam & science replied:

The verse that you mentioned states:

“I will raise them up a Prophet from among their brethren, like unto thee, and will put my words in his mouth; and he shall speak unto them all that I shall command him.” (Deuteronomy 18:18)

“Among their brethren” clearly refers to a nation other than the Israelites; otherwise it should have been “amongst yourselves.” The reference in Deuteronomy 18:18 could fit nobody else except Prophet Muhammad (peace be upon him), and not Prophet Jesus, for the following reasons:

Moses and Muhammad were born in the normal, natural course, that is, the physical union of man and woman, but Jesus was created by a special miracle.

Moses and Muhammad married and begot children, but Jesus remained a bachelor all his life.

Moses and Muhammad brought new laws and new regulations for their people, but Jesus came only to fulfill the old law of Moses.

Both Moses and Muhammad died natural deaths and were buried, but Jesus was raised to heaven.

Unlike Moses and Muhammad, who were accepted as prophets by their people in their very lifetime, Jesus was deserted even by his closest disciples.

Both Moses and Muhammad ruled and enacted laws besides their being prophets. This was not the case with Jesus.

The only likeness between Moses and Jesus was that both belonged to the Children of Israel, like all other Israelite prophets such as Solomon, David, Isaiah, Daniel, Joshua, Zechariah, John and many others.

Further, the well-known Deuteronomy 18:18, widely accepted as an unequivocal reference to Prophet Muhammad (peace be upon him), is further clarified by the following verse:

“And it shall come to pass, that whosoever will not hearken unto my words which he shall speak in my name, I will require it of him” (Deuteronomy 18:19).

It is well-known that every surah (chapter) of the Qur’an (except At-Tawbah 9) should start by: bismillah ir-rahman ir-rahim (In the name of Allah the Most Gracious, the Most Merciful). Muslims recite these words repeatedly in each of their five daily obligatory prayers, as well as before starting almost any action.

You are correct to point out that the Gospels of Matthew and Luke were both grossly mistaken in listing a false lineage of Jesus to David through his mother’s fiancé, Joseph the carpenter. Also, Matthew and Luke contradicted each other in terms of the chain length and individual names therein.

The virgin Mary, his mother, is the daughter of `Imran, whose lineage extends to the Prophet Aaron, who is a Levite. Levites are grandsons of Levi, one of the twelve sons of Jacob (Israel). So, Mary, as well, is an Israelite, and Jesus has nothing to do with Esau, the brother of Jacob. “Their brethren” could refer only to the descendants of Ishmael.

All that is only one example of a multitude of biblical evidence; some references carry even more explicit descriptions and definitions of the Prophet Muhammad (peace be upon him).

According to the Bible, the coming prophet would come from Arabia:

“And he said, the Lord came from Sinai, and rose up from Seir unto them; he shined forth from mount Paran, and he came with ten thousands of saints: from his right hand went a fiery law for them.” (Deuteronomy 33:2)

Mount Paran is the area located between the mountains of Abu-Qubays, Qi`an, and Hira’ in Makkah. It is where Abraham took his wife Hagar and their child Ishmael, as mentioned in the following:

His universal message would gather people from all around the globe and would bring them for pilgrimage to Makkah, land of Kedar, the grandfather of the Quraysh, the tribe of Muhammad (peace be upon him), as in the following prophecy:

“For, behold, the darkness shall cover the earth, and gross darkness the people, but the Lord shall arise upon thee, and his glory shall be seen upon thee. And the Gentiles shall come to thy light, and kings to the brightness of thy rising. Lift up thine eyes round about, and see: all they gather themselves together, they come to thee: thy sons shall come from far, and thy daughters shall be nursed at thy side. Then thou shalt see, and flow together, and thine heart shall fear, and be enlarged; because the abundance of the sea shall be converted unto thee, the forces of the Gentiles shall come unto thee. The multitude of camels shall cover thee, the dromedaries of Midian and Ephah; all they from Sheba shall come: they shall bring gold and incense; and they shall shew forth the praises of the Lord. All the flocks of Kedar shall be gathered together unto thee, the rams of Nebaioth shall minister unto thee: they shall come up with acceptance on mine altar, and I will glorify the house of my glory. Who are these that fly as a cloud, and as the doves to their windows?” (Isaiah 60:2-8)

They would praise Allah, as they do annually in Mina and `Arafat, the mountain tops in the following prophecy:

“Sing unto the Lord a new song, and his praise from the end of the earth, ye that go down to the sea, and all that is therein; the isles, and the inhabitants thereof.

Let the wilderness and the cities thereof lift up their voice, the villages that Kedar doth inhabit: let the inhabitants of the rock sing, let them shout from the top of the mountains. Let them give glory unto the Lord, and declare his praise in the islands.” (Isaiah 42:10-12)

The coming prophet would be illiterate, as was Muhammad (peace be upon him):

This amazingly coincides with how Muhammad (peace be upon him) received the first revelation: