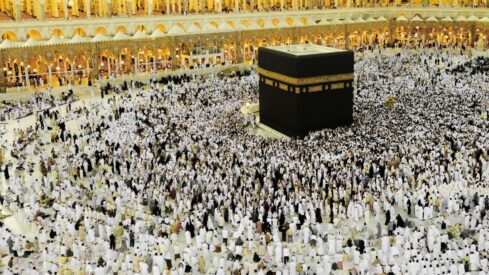 When Ibrahim (Alaihis salaam) completed the structure of the Ka’bah, Allah (Subhanahu wa ta’ala) commanded him to call the people to Hajj. Ibrahim (Alaihis salaam) pleaded, “O Allah! How shall my voice reach all of those people?” Allah (Subhanahu wa ta’ala) told him that his duty was only to give the call and it was up to Allah to make it reach the people.
Ibrahim (Alaihi s-salaam) then climbed Mount Arafat and called out in his loudest voice, “O People! Verily Allah has prescribed upon you Hajj, so perform Hajj.”

Allah (Subhanahu wa ta’ala) revealed in the Qur’an: “And proclaim the Hajj among mankind. They will come to thee on foot and (mounted) on every camel, lean on account of journeys through deep and distant mountain highways” (Surat Al-Hajj, Ayat 28).
To this very day millions upon millions of Muslims continue to answer the call of Prophet Ibrahim (Alaihis salaam). Perhaps this year you shall be amongst those who answer the call.

Hajj is the fifth pillar upon which Islam stands. Allah (Subhanahu wa ta’ala) made it compulsory upon every able Muslim male and female to perform it, at least once in a lifetime. Allah revealed: “Hajj thereto is a duty mankind owes to Allah, those who can afford the journey, but if any deny faith, Allah stands not in need of any of His creatures” (Surat Ali Imran, Ayat 97).

Performance of the Hajj washes away all sins. Abu Hurairah narrates: I heard the Prophet say, “Whoever performs Hajj and does not commit any Rafath (obscenity) or Fusooq (transgression), he returns (free from sin) as the day his mother bore him” (Sahih Bukhari).
Hajj is one of the greatest deeds one can accomplish in his or her lifetime. Abu Hurairah narrates: The Prophet was asked, “What deed is the best?” He said, “Iman in Allah and His Messenger.” “Then what?” “Jihad in the sake of Allah.” “Then what?” “Hajj Mabroor, a Hajj accepted by Allah (Subhanahu wa ta’ala).”

Abu Sha’thaa’ said, “I contemplated the good deeds that a person does. I found that salaat as well as fasting are a jihad of the body. And that sadaqa is a jihad of someone’s wealth. But Hajj is a jihad of both body and wealth.”

Hajj is the greatest jihad. Aishah (Radiallahu anha) asked the Prophet (Sallallahu alaihi wa sallam), “We find that jihad is the best deed, shouldn’t we (women) do jihad?” The Prophet replied, “Rather the best jihad is a Hajj Mabroor!” Aishah later said, “I’ll never cease performing Hajj after I heard that from Rasul Allah” (Agreed Upon).

The dua of the one in Hajj shall be accepted. The Prophet (Sallallahu alaihi wa sallam) said, “The soldier in the path of Allah and the one who performs Hajj and the one who performs ‘Umrah, all are the delegation of Allah! He called them and they answered. And they asked Him, and He shall grant them (what they ask for)!” (Authentic, narrated by Ibn Majah and Ibn Hibban).

There is not a single day that the sun has come up on more beloved to Allah (Subhanahu wa ta’ala) than the Day of Arafat. The Prophet (Sallallahu alaihi wa sallam) said, “There is no day on which Allah frees more of His slaves from Fire than the Day of Arafat, and He verily draws near, then boasts of them before the angles, saying: ‘What do they seek?’” (Sahih Muslim). And in another hadith: “Verily Allah boasts of the people of Arafat before the people of Heaven (angels) saying: ‘Look to my servants who have come to Me disheveled and dusty.’”

Abdullah ibn Al-Mubaarak narrates: I went to Sufyaan ibn al-Uyaynah as the day of Arafat was setting. He sat on his knees, his hands raised to the Heavens, and tears moistened his cheeks and beard. He turned and looked at me, so I asked him, “Amongst the people who have gathered here for Hajj, who is in the worst state?” Sufyaan ibn al-Uyaynah said, “He who thinks that Allah will not forgive him.”

Aishah (Radiallahu anha) would see the Prophet (Sallallahu alaihi wa sallam) standing in prayer at night so much so that his feet would crack. She would ask him, “Why do you do this when Allah has forgiven all your sins, the past and anything you may do in the future?” And he would reply, “Shouldn’t I be a thankful slave?”

With this example of the Prophet (Sallallahu alaihi wa sallam), what should our attitude be when we hear of Paradise and forgiveness of sin for those who perform Hajj? Does it mean that after Hajj we fall back into all the disobedience that we went to Hajj with? Does it mean that we are promised Jannah no matter what sin we do after Hajj? Many people think this to be the case and it is a very dangerous presumption.

You will find in many of the Hadith regarding the virtue of Hajj the term Hajj Mabroor. Do you know what Mabroor means? It means an accepted Hajj. A Mabroor Hajj is one in which Allah (Subhanahu wa ta’ala) is not disobeyed during or after. Others have said that a Hajj Mabroor is one that is accepted, and the sign of it’s acceptance is that a person will go back in a better state then when he came, and that he will discontinue the sins that were between him and Allah (Subhanahu wa ta’ala).

I once saw a group of Hajjis with all of their paraphernalia. Plastered on their t-shirts and hats was ‘Hajj Mabroor 1997!’ I remembered then when Ibn Umar was on his deathbed and his son reminded him of all the good deeds that he did with the Prophet (Sallallahu alaihi wa sallam) and the companions. He told him, “Quiet! Don’t you know whom Allah accepts from? Verily Allah only accepts from the God-Fearing (Al-Muttaqoon).”

When Ali ibn Al-Husayn (Radiallahu anhuma) wore his Ihram towels and sat upright on his camel in preparation for the journey to Makkah, his face changed color, his skin shivered and he cried, unable to say the Talbiyyah, Labbayk Allahumma Labbayk. Someone asked him, “What’s wrong?” And he replied, “I’m afraid that when I say it, it shall be replied, ‘Laa Labbayka wa Laa Sa’dayk’ (May you never have come and may you not have happiness).”

In the Hajj of 1996 you may have heard of the Jamarat crowd in which 600 people died. It was Dhuhr time that it happened and I had been sitting there from the early morning waiting for noon to throw my pebbles. About 30 minutes before Dhuhr a wave of people, like dominoes, toppled over us. I had said to myself earlier that if I were ever in an emergency situation I would jump up on a bus or anything high to escape the crowd. Now, I saw people doing just that and I knew this was the situation that I had feared. My friend said, “What shall we do?” With a glance over the sea of people I knew there was no way we could walk opposite of the crowd and so I replied, “Go and throw our Jamarat.”

People died that day. Ambulance sirens were blaring and helicopters were thundering above. In the pain and exhaustion, losing my friend, I sat leaning, my back on a sister and her back on me. We did not even realize what we were doing. I tasted what the Prophet (Sallallahu alaihi wa sallam) meant when he said that on the Day of Judgment people would be naked and Aishah (Radiallahu anha) asked him, “Won’t the men and women look at each other?” And he replied, “Aishah, the issue is more severe than that.”
I saw 3 men looking anxiously for their friend and I just sat staring at them. All of a sudden their faces exploded in happiness, “Ahmad! Ahmad!” they called, and one of them could not handle the happiness and he cried and cried.
Limping back to the Ka’bah I found a place with shady trees and a carpeted patio leading to a villa. The owner, an older man, stood watching as all the people walked by. And I sat watching him.

People would come up to him and beg for a glass of water. He would jump and bring them the coldest water he had. They would pray from the bottom of their hearts for him. I knew what kind of dua that was, because I was feeling the same thirst that they all felt. Whenever he saw someone sick, he would spring out to the road and invite them in, giving them a bed and food to relax them.
I was shy at first, but the thirst overcame me and I asked him for water. I had been on that patio for some time and when I asked him, he realized he had not offered me anything. He ran inside, and in addition to the water, he brought me packets of fruit juice. I thought about this man as I made my way back to the Ka’bah. If a human was so merciful to these people who had come for Hajj, these people who had come for no other reason than to say ‘La ilaaha illa Allah’, how merciful was Allah (Subhanahu wa ta’ala) going to be to these Hajjis?

Indeed, the Prophet said, “And there is no reward for an accepted Hajj…except Jannah!”