The Making of the Kiswah 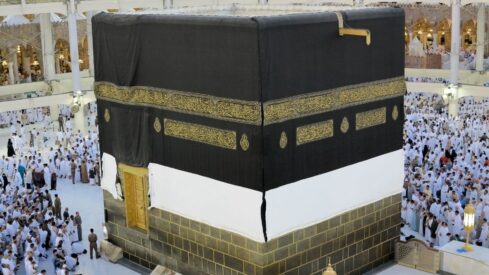 Five times a day, the world’s one billion Muslims face towards Makkah to perform their Prayers, one of the five pillars of Islam. The spiritual center towards which Muslims pray is the Ka`bah in the Sacred Mosque. A plain cubical building, the Ka`bah contains the Black Stone, the only remnant of the oldest house of worship to Allah, built by Ibrahim and his son Isma`il. To this structure come more than two million Muslims a year from around the world to perform the Hajj, the pilgrimage that is another pillar of Islam.

However, neither the stone nor the Ka`bah are objects of worship for Muslims. They represent a sanctuary consecrated to Allah and the spiritual heart of the Islamic world. Throughout Islamic history, service to the Ka`bah and the Sacred Mosque built around it has been considered a great honour. This has been particularly so since King `Abdul `Aziz ibn `Abdul Rahman Al-Sa`ud extended his protection to Makkah in 1924. When he founded the modern Kingdom of Saudi Arabia in 1932, he introduced a series of projects aimed at facilitating the pilgrimage to Makkah for larger numbers of Muslims. He initiated studies for expansion of the Sacred Mosque that encloses the Ka`bah, as well as for the Prophet’s Mosque in Madinah. He also improved health care, transportation, and housing facilities for pilgrims. At the time, the Sacred Mosque could accommodate only 48,000 worshipers. After the completion of the most recent expansion project, launched by the Custodian of the Two Sacred Mosques, King Fahd ibn `Abdul `Aziz in 1985, the Sacred Mosque can now hold more than one million worshipers simultaneously.

The Sacred Mosque was first enlarged in the seventh century C.E. by `Umar ibn Al-Khattab, the second caliph after the death of the Prophet Muhammad (peace and blessings be upon him).

The caliph also built the first enclosure around the Ka`bah, which up to that time had been surrounded by low walls and had no roof. The Ka`bah has traditionally been covered by the kiswah (drape). It is related that the Prophet Muhammad himself (peace and blessings be upon him) made a kiswah and helped drape the Ka`bah. After his passing, the caliphs maintained this tradition. Later Muslim leaders established endowments to prepare and send to Makkah a new covering for the Ka`bah every year during the pilgrimage. In recent centuries, the kiswah was made in Egypt and sent to Makkah by a special camel caravan.

In 1927 C.E., King `Abdul `Aziz established the first workshop dedicated exclusively to producing the kiswah in Saudi Arabia. Located in Makkah, the workshop was first housed in a small building and employed 16 craftsmen to produce the kiswah. A new and larger factory was established in 1962 and later expanded in 1977. This factory currently employs more than 240 craftsmen and technicians who are entrusted with the honour of making the kiswah.

The kiswah is traditionally made of black material with a three-foot-wide band of inscription running around the top part of the covering on all four sides of the Ka`bah. The main inscription, in gold thread, means “There is no god but Allah; Muhammad is the Messenger of Allah.” Other inscriptions are verses from the Qur’an.

The workshop produces two kiswahs for the Ka`bah every year. One is actually draped over the Ka`bah and the other one is used as a backup in case it is needed. Work on these two pieces continues throughout the year, passing through a series of stages.

The entire outer layer of the kiswah is made of pure silk. Each covering requires 1,795 pounds of silk thread. The thread arrives at the workshop in its natural colour and needs to be dyed, after which it is spooled and ready for weaving. This outer layer of the kiswah is woven entirely by hand, a process that requires patience and exacting attention to quality. Once the panels for the kiswah are completed, they are stitched together to form a one-piece covering. The weight and size of the covering, which is 2,158 square feet, require a backing material for strength. This backing material is also made of silk but is produced on modern mechanical weaving looms.

One of the most popular attractions for visitors to the “Saudi Arabia: Yesterday and Today” exhibit during its 1989-90 tour of major cities in the United States was the section in which Saudi Arabian craftsmen worked on the kiswah.

With the black outer shell complete, work focuses on producing the band of inscriptions. This band is about 3.2 feet high and extends 157 feet around the top portion of the kiswah. Though the text of the inscriptions never varies, the design and writing style is subject to change and is proposed by a group of artists and calligraphers. Once the design for the inscriptions has been agreed upon, artists draw them life-size on large pieces of drafting paper. These patterns are then transferred onto machines that weave the inscription band.

After the silk band is woven, it is ready to be embroidered by hand. Initially, craftsmen embroider the Arabic inscriptions on the entire band with yellow silk threads that stand out a quarter inch above the surface of the panels. Gold-plated silver thread is then used to embroider the inscriptions for a second time, giving it the raised, glittering look that allows the calligraphy to be legible from a distance. This is the most demanding and time-consuming stage of the whole process and is done entirely by artisans.

Once the bands are sewn onto the shell, the kiswah undergoes a rigorous process of checking to ensure it meets the workshop’s exacting standards.

The new kiswah is placed on the Ka`bah on the ninth day of the month of Dhul Hijjah during the annual pilgrimage to Makkah. Before this is done, the structure is washed and temporarily draped in a white covering. Once the new kiswah is in place, the one it replaces is cut up and distributed among pilgrims.

The kiswah workshop also produces a green inner curtain for the interior of the Ka`bah and a dark red one for the Prophet’s room in the mosque in Madinah. These are woven entirely by hand.

The spectacular curtain that covers the golden door of the Ka`bah is also produced by hand at the workshop. It is 23 feet high and 13.1 feet wide with the entire surface covered with verses from the Qur’an embroidered in gold-plated silver thread.

The outstanding workmanship of the curtain covering the door to the Ka`bah reflects the dedication and devotion of the people who work year-round to produce the kiswah.

In addition, the workshop produces flags of the Kingdom of Saudi Arabia, which bear the inscription: “There is no god but Allah; Muhammad is the Messenger of Allah,” as well as special gifts in the form of embroidered verses from the Qur’an.

Examples of the work of the artisans and craftsmen at the workshop can be seen at the United Nations headquarters in New York and Saudi Arabian embassies throughout the world, where sections of the kiswah are prominently displayed. To view these works of art is to appreciate the labour of love and dedication that they represent for the artists who made them and for the people of Saudi Arabia as a whole.