The Most Widely Read Book in the World 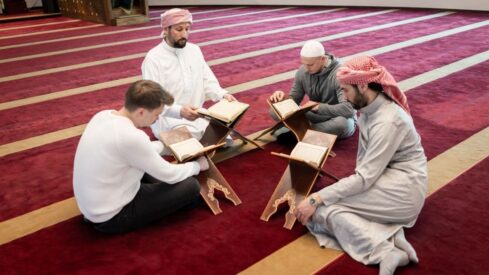 The Qur’an is the Book of Allah (God) that was revealed in Arabic to the Prophet Muhammad (peace and blessings be upon him) over a period of twenty-three years. He dictated it to his followers as he received it from the Angel Jibril (Gabriel), and they wrote it down on whatever materials were available. The Prophet and many of his followers memorized it as it was revealed.

The Qur’an consists of 114 surahs (sometimes called chapters) of various lengths, from 3 to 286 verses. The verses were revealed a few at a time and not in their present order but were placed in their position by the Prophet in accordance to instructions from the Angel Jibril.

Shortly after the death of the Prophet, the first caliph, Abu Bakr As-Siddiq, ordered the scribe Zayd ibn Thabit to collect the manuscripts and make one copy of the Qur’an. He did so with the assistance of the hundreds of Companions of the Prophet who had memorized the Qur’an, thus assuring that nothing was added or omitted, and that the order of the verses was according to the Prophet’s instructions. Later, the third caliph, ‘Uthman ibn ‘Affan, again asked Zayd to oversee the copying of the Qur’an. Several standard copies were made and sent to all the provinces of the Muslims, with orders that all other manuscripts be burned. This was to ensure that there would not be various readings of the Qur’an.

Thus, the Qur’an remains today exactly as it was revealed more than 14 centuries ago and contains the exact Words of Allah. Many thousands of Muslims memorized it each generation so that it was never forgotten. Further, the Arabic language in which the Qur’an was revealed remains a living language. There are copies of the Qur’an from the first century after the revelation in libraries in the Muslim world. A comparison to modern printed copies shows that the Qur’an has not changed over the centuries.

What Is the Qur’an About?

Someone who is familiar with the Bible might expect the Qur’an to be similar, but will be surprised to find that it is not. It is not a narrative or a collection of rules or a hymnal or a science book, yet it contains elements of all these things and more.

The Qur’an speaks of the nature of Allah, man’s relationship with Allah, and man’s relationship with others. The Qur’an has a unique style that moves from one topic to another, interweaving various themes, moving from the specific to the general and back again. For this reason, calling the surahs “chapters” is really a misnomer, for a chapter deals with one theme. The word “surah” is unique to the Qur’an.

The Qur’an contains, among other things, glimpses of the stories of previous prophets but, with the exception of Prophet Yusuf (Joseph), does not tell each story in one unbroken narrative. Rather, in various places it relates certain details and asks us to reflect on their significance.

The verses revealed in Makkah during the first 13 years of the Prophet’s mission generally deal with the articles of faith — the Oneness and Uniqueness of Allah, the Day of Judgment, the Angels, Prophets, previous Books, and Divine Decree. The verses revealed in Madinah, where the Muslims had established a nascent Islamic society, generally deal with social relationships between individuals and groups. Often just a few verses came down at a time to deal with a question or situation that had arisen in the Muslim community. Therefore, the study of the “reasons for revelation” — the background of when, where and why a particular verse was revealed — is integral to scholars’ understanding of the Qur’an.

The Qur’an remains the most widely read book in the world. All Muslims memorize some parts of it to recite in their ritual prayers daily. Many others devote a part of each day to reading the Qur’an, and even more so during the month of Ramadan. Further, there are still hundreds of thousands — both Arab and non-Arab — who memorize the entire Qur’an.