The Prophet in Ramadan – Muslim Reflections 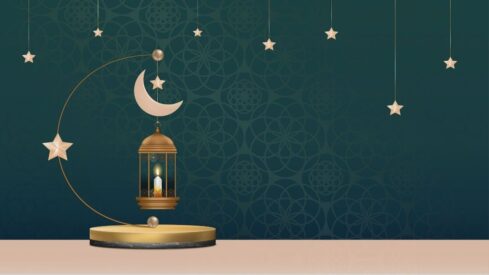 On the Night of Power in one Ramadan, the Qur’an descended on Muhammad, and he received its first verses in the Cave of Hira. (Ibn Abbas)

Thereafter the Prophet taught us how to celebrate Ramadan through days of fasting and nights of prayer: to honor each day of Ramadan as a day of patient endurance through fasting, and each night as a night of gratitude through prayers.

It was nothing short of miraculous how the Prophet reformed and refined those unruly tribes of Arabia and transformed them into pious, disciplined, God-fearing ascetics, who stood in prayers in the mosque five times a day seeking the guidance of God.

And imagine: these same people who once reveled in the pleasures of “wine and women” could now spend the whole month of Ramadan in fasting and prayers.

Into the hearts of his followers, the Prophet instilled the love and fear of God and love for humanity. His example was inspiring and irresistible; and each of them became eager to be his closest follower.

To them he was the sincerest and the most cordial of leaders. And his life was open before them like a book; they could see him practicing most closely in his own life what he was preaching.

Abandoning food, drink, and sex was only a prelude to the next stage of greater significance: of conquering avidity and cupidity, lust and licentiousness; of liberating one’s mind from flights of passion and fits of temper. Indeed the Prophet said:

Also about the effect of fasting on one’s behavior, the Prophet said, “Fasting is a shield, so the one who fasts should avoid obscene speech and ignorant behaviour. If someone abuses him or starts to fight with him, he should reply by saying: ‘I am fasting. I am fasting’.” (Bukhari)

The core of fasting according to the Prophet was one’s willingness not merely to give up self-indulgence, but to feel the need of one’s brother as one’s own. And no one was more kind-hearted and generous than the Messenger of God; and his generosity reached its peak in Ramadan. (Bukhari)

The Prophet stressed on the importance of treating people nicely when he said:

“Make things easy for people and do not make them difficult, and cheer people up and do not drive them away.” (Bukhari)

The most beloved of actions to God Almighty, is making another Muslim happy, removing a hardship that has befallen him, paying off a debt of his or ridding him of hunger. It is more beloved to me indeed that I walk with my Muslim brother to see to a need of his than secluding oneself in a mosque for a month… (Tabarani)

The heart of one who sincerely fasts is open to the contemplation of the magnificence of the countless bounties of God. That is why the Prophet asked his followers to avoid gluttony:

God is All-Merciful and He has expressed His Mercy to us His creatures through the sending of His final messenger Muhammad as an embodiment of mercy. The Prophet said:

“Have mercy to those on earth so that He Who is in Heaven will have mercy on you.” (Tirmidhi)

“The believer is not the one who eats his fill when the neighbor beside him is hungry.” (Bayhaqi)

So it was not surprising that the Prophet’s Companions loved him dearly, as he was the kindest of men, bestowing his mercy not only upon humans but also on other creatures of the world as well.
No leader could be more considerate and solicitous of his followers than Muhammad: he never allowed any Muslim to bear any burden more than they could bear, as taught by God Himself.

For he was well aware of the infirmities of people; and this is evident from his consideration for his followers in the matter of fasting: He taught Muslims to delay the sahur (the pre-dawn meal before fasting) till a little before Dawn Prayer and not to delay the iftar (the meal to break the fast) after the call to  Sunset Prayer so that no unnecessary strain is laid on the fasting person by prolonging the fast time.

During travel in Ramadan, the Prophet would either fast or break his fast; and he allowed his companions to choose between the two, according to their ability.

It is noteworthy that the Prophet did not specify a particular distance in travel as a minimum limit for a person to break the fast. His Companions sometimes broke the fast immediately after leaving home, because this was the example set by the Prophet himself.

Similarly during times of heat or thirst they were permitted  to cool themselves by pouring water on the head, and the Prophet himself did so.

His example in the matter of consorting with his wives during Ramadan was not different; he disallowed only such acts that would obviously undermine the fasting.

As for the Tarawih Prayers (the supererogatory night prayers performed in Ramadan), it is recorded that the Prophet began praying them in congregation and then he stopped, fearing that such prayers would become obligatory if he continued to pray them in congregation.

Thus while he demonstrated through his example that the Tarawih Prayers are better offered in congregation, he allowed leniency in the matter out of his mercy.

The highest point of Ramadan for Muslims is seeking the Laylat al-Qadr (the Night of Power) during the last ten days. One act of worship the Prophet emphasized particularly during this time is itikaf, which is a spiritual retreat in which one confines oneself to a mosque to spend one’s time entirely to the worship and remembrance of God.

In these modern days when people hanker after indulgence in ephemeral pleasures, one needs to return to the seclusion of the house of prayer from time to time; which is essential for one’s spiritual rejuvenation and the return to one’s Creator.

Thus the beloved Prophet has taught us how to use Ramadan as a month for disciplining our intransigent passions, for renouncing our desires for self gratification and for practicing patient endurance in the face of hardships.

The Prophet exhorted us that during Ramadan most especially it is our duty to support and uplift our less fortunate fellow humans.

Above all, Ramadan is a month of  contemplating the Grace and Bounty of God Almighty, of returning to our Guardian Lord in repentance, of sincerely seeking His forgiveness.

In the early years of the Islamic call, the Prophet (Pbuh) and Muslims faced an economic and social boycott that lasted three years.