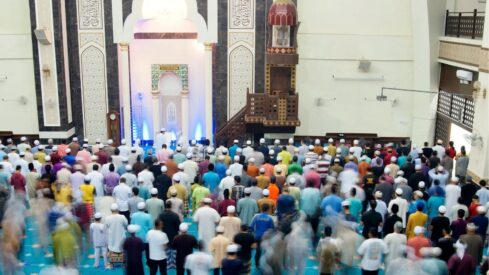 Abu Hurayrah narrated that the Messenger of Allah said, “Whoever establishes prayers during the nights of Ramadan faithfully out of sincere faith and hoping to attain Allah’s rewards (not for showing off), all his past sins will be forgiven.”

Tarawih Prayer is a special Prayer Muslims perform only in the month of Ramadan. It is a sunnah of the Prophet (peace and blessings be upon him), which means that it was his practice to perform Tarawih and Muslims are encouraged to do likewise, but it is not obligatory.

Tarawih is performed after `Isha’ (Night) Prayer. It can be performed at home, alone or in congregation, or at a mosque. In many mosques, one juz’ (30th part) of the Qur’an is recited each night in Tarawih. Thus performing Tarawih in the mosque imparts a special flavor to Ramadan, especially if one is able to do so every night and hear the whole Qur’an recited during the month.

How to Perform Tarawih

Tarawih does not have to be performed immediately after `Isha’. Muslims can postpone it till later, but in a mosque it is performed after the people have prayed two rak`ahs of Sunnah following `Isha’ Prayer.

Tarawih consists of an even number of rak`ahs, performed two by two (as Fajr Prayer is performed). The number of rak`ahs is not fixed, but it usually is either 8 or 20. It is recommended to take a short break after every four rak`ahs. In a mosque, there may be a short religious talk or du`aa’ (supplication) or dhikr (remembrance of Allah) at this time.

Tarawih Prayer is recited aloud. Muslims who are praying alone or leading others and can read Arabic, may hold the Qur’an in their hands and read aloud from it during Tarawih. (But during the fard [obligatory] Prayers Muslims must recite Qur’an from memory, although exception is made for new Muslims who are still learning how to pray.) If you cannot read Arabic, you may recite Qur’an from memory.

Tarawih may be as long or short as you like, depending on your ability to read or recite, and on your energy level. In a mosque, if one juz’  is recited, the Tarawih will last for one and a half or two hours, but some mosques recite less than that. You can inquire how much they recite in each Prayer and how long it takes. If there is more than one mosque in your area, you can choose which one to attend.

After the Tarawih, there is the Witr Prayer of three rak`ahs. In Ramadan, these can be performed in congregation and aloud. In a mosque, short surahs are usually recited during these rak`ahs. After the ruku` (bowing) of the last rak`ah, it is a Sunnah for the imam to supplicate aloud before prostrating. The congregation should answer “ameen” after each line of the du`aa’ (supplication). This supplication after ruku` is known as qunoot.

The Witr should be the last Prayer performed before dawn. So if you are praying Tarawih in congregation and wish to perform additional Tahajjud (optional Late Night) Prayers later, you may skip the Witr in congregation and perform it after Tahajjud.