The status of the Prophet (Pbuh) in the Holy Qur’an 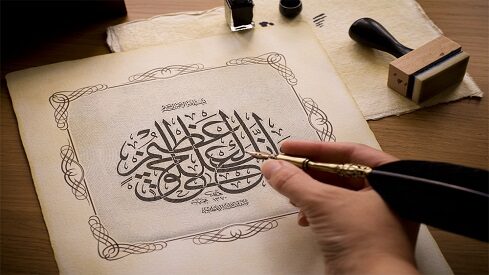 One of the topics that excite the reader and those who are familiar with the beautiful biography of the Messenger, may God’s blessings and peace be upon him, irrespective the opinions regarding the custom of celebrating the birth anniversary of the Noble Prophet in this month, is to learn about the noble characteristics of the Prophet, may God bless him and grant him peace, for he is a good example and a great role model. , Allah, the Most High, praised him in the firmness of his book, and he was immortalized in his most eloquent revelation. That is why Al-Shama’il Al-Muhammadiyah received the attention of great scholars, past and present, even in the research of non-Muslims, whether in terms of criticism or praise.

In this quick pause, we try to summarize what came from the explanation of the status of the Messenger, may God bless him and grant him peace, within the words of the Lord of the creatures, Glory be to Him, the Immortal in the Noble Qur’an. We try to derive the fragrant Prophet’s biography from it, and deepen our thought in the verses describing the Messenger, and reflect on his qualities in the first source of legislation. Explanation and verification of the information of God Almighty about his Prophet when he said about him: (And you are of a great character), and an interest in the aspects of the divine selection that the good and honorable Prophet had.

And the status of the Messenger, may God’s blessings and peace be upon him, is clearly explained and detailed in different positions from the Holy Qur’an. Sheikh Muhammad Rashid Rida traced these positions in his book “Muhammad is the Messenger of God”, a book that foretells a successful choice of the author, as he studied the Qur’anic texts, and preferred to allocate a part on the explanation of the position of the Messenger of God in the Qur’an that was revealed to him, rather he put his efforts in this book with this precious part, and this attempt lies in its benefits in introducing the general Muslims to the Prophet sent to them, and describes a scientific way in contemplating the Qur’anic verses that include the information and descriptions of the Prophet, may God’s blessings and peace be upon him, and thus confirms the necessity of Muslims’ interest in defending the prophethood of the Messenger, as the Muslim can, with this approach, prove the position of the Prophet through the revealed Book of God and recited during the night and the ends of the day, in the face of atheism and its machinations.

In this article, we summarize what was mentioned in the chapter on the status of the Messenger in the Qur’an from the book of Sheikh Muhammad Rida (Muhammad is the Messenger of God), and that is as follows.

b- Praise for his morals, may God’s blessings and peace be upon him : God praised the morals of the Messenger, may God’s blessings and peace be upon him, and said: (And you are of a great character) [Al-Qalam: 4], and this is more eloquent in praise, and there is no praise after that, for good manners are the greatest that one possesses. The Messenger was the highest example and role model for creation in the virtues of morals. The verse used the letter (Ala) to denote the mastery of moral, as the Prophet, may God bless him and grant him peace, was capable of great character in himself and in his religious vocation.

3- Sending of the Messenger a kindness to all worlds : God Almighty has been gracious to mankind by sending the Prophet, may God bless him and grant him peace, for what his mission carries in exalting the word of monotheism and suppressing disbelief and misguidance. Allah Almighty says: ( Certainly did Allah confer [great] favor upon the believers when He sent among them a Messenger from themselves, reciting to them His verses and purifying them and teaching them the Book and wisdom, although they had been before in manifest error.) [AlImran: 164], and is his mission is considered a great blessing on creation, and gave beautiful descriptions of Prophet, to be a symbol of education and purification, and to guide people to Islam, as Almighty said: (And We have not sent you except comprehensively to mankind as a bringer of good tidings and a warner. But most of the people do not know.) [Saba: 28].

The meaning of prayer in this verse is a mention of goodness, and sayings that bring goodness, so there is no offense, Du’a was the most famous of the names of Solat, so God’s prayer: His words by which goodness is estimated for His Messenger, may God bless him and grant him peace, because the reality of supplication on the side of God is suspended, because God is the one who is called by people, and Angels and people’s prayer: seeking forgiveness and supplication for mercy. [Ibn Ashour: 22/98].

5 – Politeness in the presence of the Prophet peace be upon him : Allah the exalted mandated  on the faithful to uphold good manner in the presence of the Messenger of God, Allah the Almighty said: (Indeed, Allah confers blessing upon the Prophet, and His angels [ask Him to do so]. O you who have believed, ask [Allah to confer] blessing upon him and ask [Allah to grant him] peace.) [Al-Hujurat: 2], where he forbade them to raise their voices above the voice of the Prophet; Because the one who raises his voice in the presence of others makes for himself an extra consideration and greatness. Also what is meant may be to prevent from speaking a lot in his presence because that is not appropriate in the assembly of the Messenger due to the greatness of his value. [Muhammad Rashid Rida, Muhammad rasuulu Allah: 401].

The reasoning for this prohibition came in his saying (that your deeds be thwarted) out of concern for the necessity of adhering to manners in the presence of the Messenger, may God’s blessings and peace be upon him, and that turning away from this matter brings the soul back to bad manners in the presence of the Prophet, and leads its owner to weak faith, till he renounces the faith.

6 – Accept the judgment of the Messenger of Allah , peace be upon him : God Almighty says (But no, by your Lord, they will not [truly] believe until they make you, [O Muhammad], judge concerning that over which they dispute among themselves and then find within themselves no discomfort from what you have judged and submit in [full, willing] submission.) [Al-Nisaa: 65], God made it known to the ummah that those hypocrites who doubt the Messenger’s fairness in judgment, they are not believers until they adjudge the Messenger and do not find in themselves embarrassment from his judgment, i.e. embarrassment that distracts them from his judgment, or makes them angry with his judgment after his judgment. It is known from this that believers do not turn away from his judgement and do not be embarrassed by his judgement rather analogy. [Al-Tahreer wa al-tanweer].

7 – Non- violating and opposing the Prophet peace be upon him , God Almighty says: (And whoever opposes the Messenger after guidance has become clear to him and follows other than the way of the believers – We will give him what he has taken and drive him into Hell, and evil it is as a destination.) [Al-nisaa: 115], meaning of “Almushaqah” intended  opposing, derived from “Al_shaqq” is because the offender is choosing a split opposing the other split. God Almighty has attached a threat to those who oppose the Messenger and follow other than the path of the believers, and the violating of the Messenger alone necessitates this threat.

Muhammad Rashid Rida says : This verse indicates the infallibility of the Messenger from all sins. If the guilt was prevented from the Messenger, violating his command would have been necessary. But his opposing, may God’s blessings and peace be upon him, is prohibited by this verse, so the sin must not be issued from him. It also indicated that the Messenger must be imitated in his actions; For if the action of the ummah was other than his, may God’s blessings and peace be upon him, it is necessary that each one of them be in another part of the work, so opposition will occur, but that is forbidden, so it is necessary to follow him in his actions, may God’s blessings and peace be upon him. [Muhammad rosuulu Allah: 402].