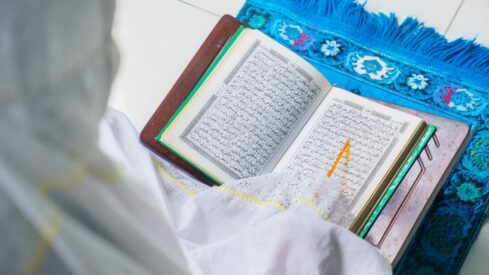 Praise be to Allah! May Allah’s Peace and Blessings be upon Prophet Muhammad, his family and his companions, and those who follow their guidance until the Day of Judgment.

Right now, I am the only Muslim in my entire family; however, Insha’Allah, there will be more.

This is the story of my life – the long and short of it – including the time before I discovered the truth in Islam and converted, and all of the blessings that Allah (SWT) has given me since then.

Before Islam, my life seemed worthless. I saw no point in it. Half of it was made up, and I wasn’t sure what it the other half even was.

Actually, I thought my life was worse than it really was. I was hurting myself and my family – especially my parents – because I often took out my anger on them. My parents, who gave me everything for nothing.

Sometimes, people made me feel bad – like I was an outcast. I was overweight when I was small, and I got even bigger as I grew older until 8th or 9th grade. I would come home crying because they would talk about me behind my back. I always had very low self-esteem, and whenever anyone insulted me, I couldn’t handle it.

Although I had good grades, I didn’t realize it until they dropped. When I was in 6th grade, I never dared miss a day of school. I loved school. At least, back then I did.

But I started having even more problems with people because of my big mouth and all the lies I started telling. Eventually, my problems at school made me want to stay home even though I liked learning. And even though I felt like there was nothing to go home for. My parents constantly argued, and I was in the middle. I felt trapped.

Sometimes I felt okay. But then, I would act “too” happy. And since I actually wasn’t happy, it just made things worse. You see, my life was fine, but since I wasn’t mindful of Allah, I didn’t even know it then. I exaggerated everything.

Then, there were the guys. Yep, for sure – in every girl’s mind including mine. I tried to be friendly with them, but none of them liked me so I started to hate myself more and more.

One day, I decided I couldn’t handle it any more so I told everyone how I felt – people at school, my whole family. Including my grandparents that I knew didn’t like me or my mom then.

I let out everything. I told them all how unhappy I was and how lonely I felt.

I was Catholic, and I tried praying. But I felt like I was worshipping a Prophet and a cross, and praying to the Virgin Mary and all the angels and saints. I prayed for a better life, but nothing happened. I wanted to kill myself at the age of 13 and 14. I didn’t actually think I would do it, but the thought was there. Each day seemed to get harder instead of easier.

I was jealous of my friends who had boyfriends. I wanted to be beautiful, and the only way I could believe that I was, was if someone told me that I was. However, when my mom said nice things, I never believed her – I always thought that she was lying to me and that she was just saying them because she was my mother.

Now that I think back, I did not look all that bad. I was just overweight, and not even that much. But I felt I had a miserable life. Until Allah (SWT) decided to guide me away from the Kufar (those who deny Truth).

During the summer of 2000, I met someone who began to teach me about Islam. On November 4th, a Saturday, they gave me a copy of the Qur’an, and I started to read it. In about 3-1/2 months, I completed it. By the way, it was the first book that I read completely through without skipping any words. Masha’Allah!

Then on February 13, 2001, I was sitting at home sick and very depressed. I had been waiting to get the phone numbers of other Muslims. That day, I couldn’t take the pressure of everything that was going on – with my friends, my family, and with a guy I had been dating and felt that I loved. He loved me back, but his family wanted him to be with another girl from his country.

I was thinking of committing suicide when an idea popped into my head. Alhamdulillah! I told myself that it was time to make a change, and I called Masjid Hamza, a mosque in Mira Mesa here in Southern California. I asked for the phone numbers of some Muslims, and I got to talk to a couple of sisters. I told them that I had been learning about Islam and asked them for their advice. I ended up talking to a 13-year old sister and telling her that I wanted to become Muslim and I didn’t know how to. She told me that I just needed to have the Kalimah in my heart to be a Muslim, but that I should declare it before at least two witnesses. She then asked me if I wanted to say it before her, her father and his assistant who were both with her at home.

I decided to say it – right over the phone. I was so happy – even before I declared it.

There is no deity worthy of worship but Allah, and Muhammad is His slave and messenger!

I was so happy that I was shaking. I had now been forgiven my sins. I started to cry. My Muslim sister, her father and his assistant were very happy for me.

As soon as I hung up, I called my friend that had been teaching me about Islam to let him know that I had taken Shahadah. He was also very happy for me. I then took a shower, looked into the mirror and told myself, “I am a Muslim, I am a Muslim. Oh, my gosh, I am Muslim. Masha’Allah!”

As the days went by, I talked to more and more Muslim sisters. I was learning about Islam. But I hadn’t told my parents – I was scared to because I thought they would kill me when they found out. I asked a sister what I should do, and then a very knowledgeable sister asked some scholars for their advice. They told me that it was okay not to tell them until I felt it was a good time because I was under age – only 14.

I eventually told my mom and she got very upset, but as the days passed, things got better. She wanted to tell my dad, but I didn’t think it would be a good idea. Although she didn’t agree, she understood me and that was progress.

I met some Muslims at school – some who wore headscarves and some who didn’t. A couple that I was friends with before I converted were very happy. I started learning to pray by myself through reading books. I memorized the entire prayer by myself. Subhana’Allah!

I visited the mosque once in a while since it was so hard for me to do so. And I started wearing my scarf at home and outside. I was trying to get used to it. Then, my dad saw me in it. I was scared of what he was going to say, but I told him that I was following Allah’s commandments. He told me that I was getting smarter.

I stopped caring so much about what others were thinking of me. It was hard but I felt more confident.

I loved the way I looked in my scarf and I still do. Alhamdulillah!

I started talking to my dad about Islam. I had already been talking to my mom, and I decided it was time for my father to find out about it. I no longer feared him or what he’d do to me because I knew that Allah (SWT) would make it easier for me and guide me through hardship, and that He was with me. When my dad did find out, it wasn’t as hard as I thought it would be. ALLÂHU AKBAR!

Since I have become a Muslim, I feel so lucky. I have more friends. And these are real friends. I have also realized the kind of person I really am and the beauty that Allah (SWT) has granted me. Now, I am happy with the way I look. I have lost weight, and I love my skin, my hair and my personality. I love the fact that Allah (SWT) has given me appreciation for who I am and what I look like.

I am so happy that Allah (SWT) has given me the chance to be Muslim and someday, Insha’Allah, marry a pious husband, and have kids and teach them. I am very thankful for everything I have achieved so far, and to know that I am here for a reason and that to Allah (SWT), I will someday return.

I ask Allah (SWT) to keep me on the straight path and to help me learn more about the deen (religion).

I ask Allah (SWT) to guide my parents and friends.

I ask all the sisters and brothers of Islam to make du’a for me and for the brother who first taught me about Islam, by the will of Allah (SWT).

Let us talk to others about Islam, and let us be strive to be believing Muslims – those who submit to the will of Allah (SWT) each and every day.

I testify that there is no deity worthy of worship but Allah (SWT), who has no partner, and I testify that Muhammad is His slave and messenger.

Zakah is a portion of one’s wealth that must be given to the poor or to other specified causes. The word “zakah” comes from the verb meaning to purify or cleanse. It is the third Pillar of Islam and is obligatory for all those who are financially able.   Zakah means the giving of a specific share of one’s