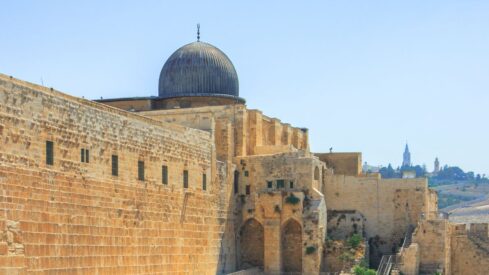 So many million Muslims observe the rituals of Islam: fasting, praying, and paying zakah, and yet Muslims remain weak and subservient to foreign domination. The difference between many Muslims today and `Umar ibn Al-Khattab is that he did not merely observe the rituals but followed Islam in all its concrete and dynamic dimensions.
No one sentence encapsulates what he stood for and practiced, as when he said, “When I heard the Qur’an my heart was softened and I wept, and Islam entered my heart.”

The key to `Umar’s exemplary behavior was social justice. For him, social justice meant redistribution of power and income in such a way that, when introduced at the lowest level, it spreads upward to all the reaches of society. This is quite the opposite of what the West practices in the form of production and income filtering down to lower levels; the trickle-down approach.
`Umar followed the principle set by the first caliph, Abu Bakr As-Siddiq, when he said, “The weak among you shall be strong with me until their rights have been vindicated, and the strong among you shall be weak with me until, if the Lord wills, I have taken what is due from them…” and considered it one of the central objectives of his public policies.
On the relationship between ruler and citizens, `Umar said, “People usually hate their ruler, and I seek the protection of Allah lest my people should have similar feelings about me.” No senator or president could have lectured `Umar about the abuses of campaign financing or could have accused `Umar of having handed over the entire social system to corporate elites.
How `Umar practiced social equality was best demonstrated when he entered Jerusalem as a liberator, not as leaders would act. He entered Jerusalem in humility, walking on foot with his servant comfortably riding a camel, as they had been taking turns riding. He, then, gave Muslims another practical example of how to treat Christians and non-Muslims, when the Prelate of Jerusalem asked him to pray in the sepulcher, but `Umar chose to pray some distance away from the church: saying that he was afraid that in the future Muslims could use this as an excuse to take over the church to build a masjid claiming that this is the place where `Umar prayed — which is a clear practical lesson in respecting others.
There were numerous examples of the caliph moving around incognito at night to find out if anyone was suffering from hunger or economic deprivation. There was a moving example of a woman trying to lull her children to sleep by pretending to cook food in an empty pot. `Umar was shocked when he entered this house and asked the woman why she had not sought assistance from the public treasury. The woman, not knowing the identity of `Umar, said, “Who cares for poor people?”
`Umar then brought grain for her, carrying it by himself on his back, and cooked for the hungry children. He was so kind and generous with them to the extent that the woman said, “I wish you were the caliph.” `Umar told his servant, who was remonstrating, that Allah would hold the caliph accountable for the hunger and poverty, which people suffered from.
During his reign, `Umar gave the poor stipends from the public treasury without any discrimination based on religion. After taking the surrender of Jerusalem and completing the tour of Syria, Caliph `Umar delivered an important speech that clearly set out his understanding of his role as caliph. He stated,

“Imbibe the teachings of the Qur’an, then practice what the Qur’an teaches. The Qur’an is not a theory; it is a practical code of life. The Qur’an does not only bring you the message of the hereafter, it also primarily intends to guide you in this life. Mold your life in accordance with the teachings of Islam, for that is the way of your well being. By following any other way you will be inviting destruction.

Fear Allah, and whatever you want, seek it from Him. All men are equal. Do not flatter those in authority. Do not seek favors from others. By such acts you demean yourself. And remember that you will only get what is ordained for you, and no one can give you anything against the will of Allah. So why do you then seek favors from others who have no real control? Only supplicate Allah for He alone is the Sovereign.

Allah has, for the time being, made me your ruler. But I am one of you—, no special privileges belong to rulers. I have some responsibilities to discharge, and in this I seek your cooperation. Government is a sacred trust, and it is my endeavor not to betray the trust in any way. For the fulfillment of this trust I have to be a watchman…”

For example, when Pakistan was established, its founders followed the British viceregal system with all its consequential pomp and paraphernalia, which created a culture of gross inequalities as well as public expenditures which would often exceed public resources. In contrast, when ambassadors from the Byzantine Empire came to see the caliph, they were told that the caliph did not live in a palace but was probably resting in the Prophet’s Mosque.
The political and economic culture that we have followed has created a clear impression that conspicuous consumption is the culture of the ruling elites. The poor masses are consigned to a life steeped in poverty and social degradation.
`Umar was not suggesting that our rulers should not have their official residences, but what he was emphasizing was simple living and positive thinking. If our rulers had followed `Umar’s Islamic model and not the British viceregal model in which the elites like the governor-general or the president or the civil and military bureaucrats have certain built-in privileges, we might have saved our countries from corrupt rulers and military and civil oligarchs.
The hallmark of the Islamic system as developed and defined by `Umar ibn Al-Khattab was that the common man was conscious of his rights and responsibilities as a citizen of participatory democracy. When a Muslim stands in prayer and recites the very first line of Surat Al-Fatihah, he utters the memorable and moving phrase that Allah is the Sustainer of many worlds. Thus, his education has begun. An illiterate or poor Muslim is being moved in the direction of physics and astronomy.

Islam suggests that the common man is capable of developing his mind in this fashion. With this development he becomes aware that he is equal to any other Muslim and that the Qur’an has also told him that he has a right to ask questions even to the Prophet as in Surat `Abasa (surah no. 80). This explains why `Umar ibn Al-Khattab emphasized and practiced social equality.
He recognized that this social equality is the reason of why Islam has spread so rapidly within one generation to the Middle East and North Africa. Those who merely describe `Umar ibn Al-Khattab as a great conqueror whose conquests exceeded those of Charlemagne and Julius Caesar do not appreciate that `Umar tried to spread Islam by captivating human minds through his doctrine of social equality and social justice.

By Khalid B. Sayeed

Taken with some modifications from pakistanlink.com