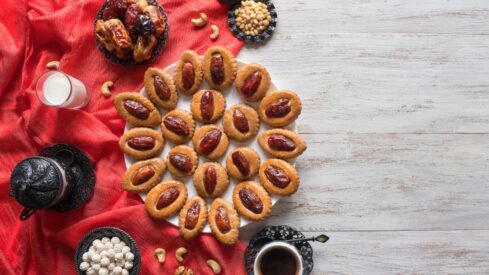 One of the manners of `Eid is to take a bath before going out to the prayer.

Eating Before Coming Out:

One should not come out to the prayer-place on `Eid al-Fitr before eating some dates or something.

Takbeer on the Day of `Eid:

This is one of the greatest Sunnahs of this day, because of the words of Allah, “… (He [Allah] wants that you) must complete the same number (of days), and that you must magnify Allah (say Takbeer “Allahu Akbar”) for having guided you so that you may be grateful to Him.”

The time for making Takbeer on Eid al-Fitr starts from the night of Eid until the time when the imam comes in to lead the prayer.

The Wording of the Takbeer:

People may exchange congratulations and good greetings on Eid, no matter what form the words take. For example they may say to one another, “Taqabbal Allahu minna wa minkum (May Allah accept [the fast and worship] from us and from you” or “Eid Mubarak” and other similar permissible greetings.

As for women, they should avoid adornment when they go out for `Eid, because they are prohibited from showing their adornment in front of non-mahrem men. A woman who wants to go out is forbidden to wear perfume or to show off in a tempting way in front of men, because she is only going out for the purpose of worship.

Listening to the `Eid Khutbah:

The `Eid Khutbah differs from the Friday Khutbah in that it is Sunnah and it is not obligatory to listen to it.

Imam An-Nawawi said: “It is mustahabb (recommended) for people to listen to the Khutbah, although the Khutbah and listening to it are not essential conditions of the `Eid prayer.

To Go Out By One Route and Come Back By Another:

One should vary his routes on the day of `Eid. So, one should go out walking, then he would come back walking by a different route. It is said that this is done so that the two different routes would testify in one’s favor on the Day of Resurrection, because on that Day the earth will speak about everything that was done on it, good and evil.

It is also said that this is done in order to demonstrate the symbols and rituals of Islam along both routes and to pronounce the remembrance of Allah.