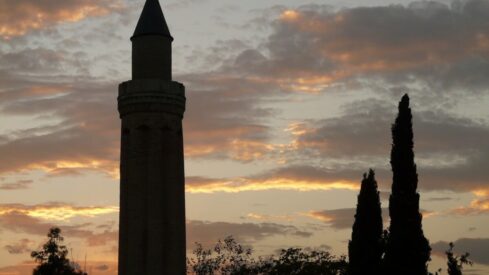 The Unseen is kneaded into the very substance of Islamic belief. It has a special status in the realm of man’s knowledge of his Lord and his surroundings. The Unseen is part and parcel of man’s true faith and genuine submission to Allah.

(The Messenger believeth in that which hath been revealed unto him from his Lord and (so do) the believers. Each one believeth in Allah and His angels and His scriptures and His messengers. We make no distinction between any of His messengers and they say: We hear, and we obey. (Grant us) Thy forgiveness, our Lord. Unto Thee is the journeying.) (Al-Baqarah 2: 285)

Al-Israa’ and Al-Mi`raj was a night journey that occurred wholly during the night. It was an honoring night journey and a blessed ascension granted to Prophet Muhammad (peace and blessings be upon him) at a critical period for the nascent Islamic da`wah. It is an occasion that is intrinsically related to the Unseen, for the faithful supporters of the Prophet were put to a litmus test upon hearing of the blessed event.

The first verse that talks about Al-Israa’ gives special status to both seeing and hearing as necessary tools for perception:

(Glorified be He Who carried His servant by night from the Inviolable Place of Worship to the Far Distant Place of Worship the neighborhood whereof We have blessed, that We might show him of Our tokens! Lo! He, only He, is the Hearer, the Seer.) (Al-Israa’ 17:1)

In our earliest years, we were taught that the Unseen is something that is only taken through sama` or hearing, and there is a great portion of Islamic creed that is named sam`iyyat or religious matters (mainly related to creed) that are usually taken through hearing from divine revelation given to the Prophet (peace and blessings be upon him). The Unseen should be taken for granted by a true believer, as only the doubters and those who sow the seeds of doubts and disbelief attack the Islamic creed from this aspect by claiming that only “seeing is believing.” The doubters were given the test of Al-Israa’ and Al-Mi`raj in order to verify their commitment and loyalty to a new creed that is mostly new and unseen. Would they believe in something they didn’t see or would they stick to their barren perceptions and narrow dimensions? True believers remained loyal, while such doubters did not manage to overthrow the seeds of doubt and failed the creedal test; hence they deprived themselves of the divine light. It was as if Allah was testing the very small number of people around the Prophet to allow the whole Muslim community afterwards to make a fresh start on a solid basis.

Al-Israa’ and Al-Mi`raj gives us a lasting lesson in believing that Allah is the All-Knowing of the Unseen—a world that is kept hidden from us and a challenging sign of Allah’s creation, especially to human beings. The Prophet Muhammad (peace and blessings be upon him) declared that he had no knowledge of the Unseen, as it is a matter so special for Allah. The Qur’an instructs the Prophet to declare (Had I knowledge of the Unseen, I should have abundance of wealth, and adversity would not touch me. I am but a warner, and a bearer of good tidings unto folk who believe) (Al-A`raf 7:188). The Prophet himself was shifted from the earthly world to (the lote-tree of the utmost boundary) (An-Najm 53:14), and he was exposed to different sights in a totally unseen world. He then came and narrated those sights to the believers in order to make them benefit from moral lessons behind those sights and to test the solidity of their creed. Thus, the Unseen in the blessed occasion of Al-Israa’ and Al-Mi`raj was a gauge by which people’s faith was tested.