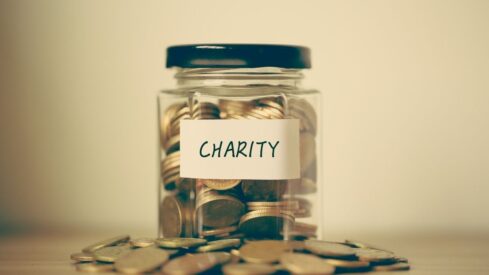 Charity is of two types in Islam. One that is compulsory called Zakat, and voluntary charity which is also referred to as (Sadaqah).

Zakat (Charity) is one of the 5 pillars of Islam alongside Shahadah, Salah, Fasting and Hajj. It is an obligation on every adult and sane Muslim whose total wealth in a lunar year equals or exceeds at least a minimum of 87.48 grams of gold or 612.36 grams of silver.

There are 8 categories of people who are eligible to receive Zakat and they are mentioned in the Quran.

“Alms are meant only for the poor, the needy, those who administer them, those whose hearts need winning over, to free slaves and help those in debt, for God’s cause, and for travelers in need. This is ordained by God; God is all knowing and wise.” [Quran 9:60]

It is an obligation for people paying Zakat to give away 2.5% of their total wealth in the way of Allah the Exalted. Muslims believe that Zakat purifies, blesses and increases their wealth rather than reducing it.

This article will focus mainly on voluntary charity or Sadaqah but in order to properly fulfill the obligation of the 3rd pillar of Islam, you can find more authentic Islamic information on this website for your convenience.

Sadaqah on the other hand is not compulsory and is not limited to money alone. Sadaqah can range from giving money to giving good advice, spreading knowledge, speaking a kind word, smiling at a stranger, building a well or masjid and so on.

“Every good is charity. Indeed among the good is to meet your brother with a smiling face, and to pour what is left in your bucket into the vessel of your brother.” [Jami` at-Tirmidhi]

Tips for you to give charity without hesitating in Ramadan

In the month of Ramadan, the reward for doing good deeds is doubled and therefore we should try to worship and spend in Allah the Exalted’s way as much as we can. Here are a few reminders and tips that will help you give charity without hesitating in this Holy month.

1. Charity is due on oneself

Abu Hurairah (May Allah the Exalted be pleased with him) reported:

Messenger of Allah (ﷺ) said, “Every day the sun rises charity (Sadaqah) is due on every joint of a person: you administer justice between two men is a charity; and assisting a man to mount his beast, or helping him load his luggage on it is a charity; and a good word is a charity; and every step that you take (towards the mosque) for Salat (prayer) is a charity and removing harmful things from the road is a charity”. [Al-Bukhari and Muslim]

It is reported on the authority of ‘Aisha (May Allah the Exalted be pleased with her) that Messenger of Allah (ﷺ) said, “Every one of the children of Adam has been created with three hundred and sixty joints; so he who declares the Glory of Allah (i.e., saying Allahu Akbar), praises Allah (i.e., Al-hamdu lillah), declares Allah to be One (i.e., La ilaha illallah), glorifies Allah, and seeks forgiveness from Allah (i.e., Astaghfirullah), and removes stone, or thorn, or bone from people’s path, and enjoins good and forbids evil, to the number of those three hundred and sixty, will walk that day having rescued himself from Hell”. [Muslim]

2. The best form of charity

The best kind of charity is the one given by a wealthy person to those who are dependent on them. The beauty of Islam is such that if every one were to follow this consistently and take care of those closest to themselves, no one in the community would have to resort to begging.

“The Messenger of Allah (ﷺ) said: “The best of charity is that which is given when you are self-sufficient, and start with those for whom you are responsible.” [Sunan an-Nasa’i]

To give in charity gains a person one reward but helping a relative in need equals to 2 rewards because it increases feelings of kinsmanship in the family.

The Prophet (ﷺ) said: “To give something to a poor man brings one reward, while giving the same to a needy relation brings two: one for charity and the other for respecting the family ties.” [Al-Tirmidhi]

3. Source of protection from misfortunes

Sadaqah is not only heavy on the scales of good deeds but it also doubles as a source of protection by delaying or preventing calamity on the giver.

4. Shade on the Day of Judgment

There is no doubt that the Day of Reckoning will be the most difficult of all days for everyone as all souls will reap the consequences of their actions on Earth and be sent to Heaven or Hell accordingly. It will be a Muslim’s charity and willingness to look after the less fortunate in their community that will provide them relief in the form of shade during that scorching and fearsome day.

The Prophet (ﷺ) said: “The believer’s shade on the Day of Resurrection will be his charity.” [Al-Tirmidhi]

5. Better to give than to take

The person who gives is always better than the one who takes. Allah the Exalted will take care of the affairs of the believer who continues to help others despite his circumstances instead of spreading their hands in front of others other than their Lord.

The Prophet (ﷺ) said: “The upper hand is better than the lower hand (he who gives is better than him who takes). One should start giving first to his dependents. And the best object of charity is that which is given by a wealthy person (from the money left after his expenses). And whoever abstains from asking others for some financial help, Allah will give him and save him from asking others, Allah the Exalted will make him self-sufficient.” [Al-Bukhari]

Humans are greedy by nature. It is very important to stop greediness from taking a hold in our life. Charity nips this nuisance in the bud by preventing a person from hoarding wealth and becoming attached to it.

The Prophet (ﷺ) said: “Avoid doing injustice to others, for on the Day of Judgment, it will turn into manifold darkness, and safeguard yourself against miserliness, for it ruined those who were before you. It incited them to murder and treating the unlawful as lawful.” [Muslim]

7. Charity that continues even after one’s death

After a person’s demise, only three things will benefit and relief them in the afterlife;

The Prophet (ﷺ) said: “When a person dies his works end, except for three: ongoing charity, knowledge that is benefited from, and a righteous child who prays for him.” [Muslim, Al-Tirmidhi]

8. Charity can be any deed depending on your intention

Islam is a religion of ease. Allah the Exalted does not burden a soul beyond that which it can bear. Similarly it does not matter to Him how big or small the deed was except for the intention with which it was done.

Abu Dharr reported that it was said, “Messenger of Allah (ﷺ), the wealthy people have taken all the rewards. They pray as we pray. They fast as we fast, but they give Sadaqah from their excess wealth.” He (ﷺ) said, “Has Allah the Exalted not given you something to give as Sadaqah? Every time you praise or glorify Allah the Exalted is Sadaqah. There is Sadaqah in sexual intercourse.” He was asked, “Is there Sadaqah to satisfy one’s appetite?” He replied, “If he does it in a haram manner, is that not a wrong action? Similarly if he does it in a halal manner, he receives a reward.” [Al-Adab Al-Mufrad]

Upholding the morals and values of Islam and struggling to adhere to them during our daily life is Sadaqah as well. Keeping this in mind, the possibilities for what Sadaqah can be are endless. There is no reason to hesitate or feel shy about the extent of your charity as long as your intention is for Allah the Exalted alone.