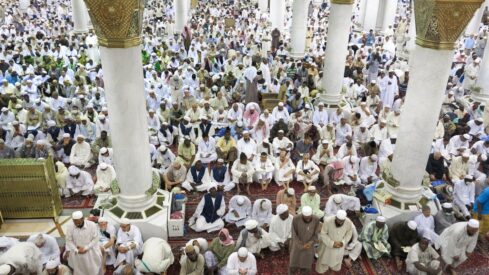 When Prophet Abraham (peace be upon him) completed the building of the Kabah, Almighty Allah commanded him to call people to Hajj. Prophet Abraham pleaded, “O Allah, how shall my voice reach all humankind?” Almighty Allah told him that his duty was only to make the call and that it was up to Allah to make it heard by people. Prophet Abraham then climbed MountArafat and, as loud as he could, yelled, “O People, verily, Allah has prescribed Hajj for you, so perform it.”

The following verse from the Qur’an refers to the fact that Almighty Allah commanded Prophet Abraham to call people to Hajj:

(And proclaim unto humankind the pilgrimage: They will come unto you on foot and on every lean camel; they will come from every deep ravine.) (Al-Hajj 22:27)

To this day, millions upon millions of Muslims continue to answer the call of Prophet Abraham. May Allah help us all be among those who answer this noble call.

Hajj is the fifth pillar of Islam. Almighty Allah obliges every financially and physically capable Muslim male or female to perform Hajj once in a lifetime. Almighty Allah says,

(And pilgrimage to the House is incumbent upon humankind for the sake of Allah, (upon) everyone who is able to undertake the journey to it, and (for) whoever disbelieves, surely Allah is Self-Sufficient, above any need of the worlds.) (Aal `Imran 3:97)

Sinless Like Newborns. Abu Hurairah (may Allah be pleased with him) narrated that he heard Prophet Muhammad (peace and blessings be upon him) say,

“Whoever performs Hajj and does not commit any obscenity or transgression shall return [free from sins] as he was on the day his mother gave birth to him.” (Al-Bukhari)

One of the greatest deeds. Abu Hurairah narrated that the Prophet was asked, “Which deed is the best?” The Prophet said, “Belief in Allah and His Messenger.” He was asked again, “What is next?.” The Prophet said, “Jihad [striving] in the cause of Allah.” He was further asked, “And what is next?” He said, “Hajj mabroor [i.e. Hajj accepted by Almighty Allah]” (Al-Bukhari).

Abu Ash-Sha`thaa’ (one of the pious successors) said, “I contemplated the good deeds that a person does, and I found that performing Prayer and fasting are [types of] jihad of the body, and charity is a jihad of the wealth, whereas Hajj is a jihad of both the body and the wealth.”

Women’s Jihad. A’ishah (may Allah be pleased with her) asked the Prophet, “As jihad is the best deed, shouldn’t we [women] make jihad?” The Prophet replied, “The best jihad for you [women] is a Hajj mabroor. “A’ishah later said, “I have been keen to regularly perform Hajj since I heard that from the Messenger of Allah” (agreed upon).

Answered Supplication. The Prophet is reported to have said,

Day of `Arafat. The Prophet is reported to have said,

“There is no day on which Allah frees servants of His from Fire more than [those freed on] the Day of `Arafat. And, verily, He draws near and then proudly speaks about them [i.e. the pilgrims] before the angels, saying, ‘What do these seek?'” (Muslim)

“Verily, Allah proudly speaks about the people of Arafat before the people of Heaven [i.e. angels], saying, ‘Look to My servants: They have come to Me disheveled and dusty.'” (Al-Haithami and Al-Wadii)

I went to Sufyan ibn Uyaynah as the Day of Arafat was approaching. He was resting on his knees, with his hands raised to the heaven and his cheeks and beard moistened with tears. He looked back and saw me, so I asked him, “Among the people who have gathered here for Hajj, who is in the worst state?” He replied, “He who thinks that Allah will not forgive him.”

`A’ishah would see the Prophet standing for Night Vigil Prayer all night until his feet were cracked and swollen. She asked him, “Why do you do this at a time when Allah has forgiven all your past and future sins?” The Prophet said, “Shall I not be a thankful servant?” (agreed upon).

This is the sublime example of Prophet Muhammad, whose sins were already forgiven. Now, how should we react to the glad tidings of Paradise and forgiveness of sins promised to those who perform Hajj?

There are many hadiths that speak about the virtues of Hajj and affirm that sins are forgiven after a Hajj that is accepted by Allah. However, it should be emphasized that pilgrims should continue to obey Allah and His Messenger after Hajj. The belief that pilgrims will enter Paradise regardless of the sins they commit after Hajj is a misconception. This misconception is quite popular; it should therefore be corrected.

As mentioned earlier, the Arabic term Hajj mabroor means a Hajj that was accepted by Almighty Allah. Such Hajj is free from sins, during and after it. If pilgrims returned to their homes in a state better than their state before they went to Hajj, then this would be a sign that their Hajj was accepted. Another sign is pilgrims’ refraining from committing sins after Hajj.

While Ibn Umar was on his deathbed, his son reminded him of all the good deeds he did along with the Prophet and his Companions. Ibn Umar told his son, “Quiet! Don’t you know whom Allah accepts from? Verily, Allah accepts only from those who have taqwa [piety and fear of Allah].”

Ready to go to Makkah for Hajj, Ali ibn Al-Husayn wore his attire of ihram and mounted his camel. Suddenly, the color of his face changed and its skin shivered. As he started to cry, he was unable to intone the Talbiyah [Hajj prayer: Here I am at Your service, O Allah; here I am]. Someone asked him, “What’s wrong?”Ali ibn Al-Husayn said, “I am afraid that if I recite it [i.e. the Talbiyah], I will be answered, ‘May your call not be answered, and may happiness not be your reward.'”

With that spirit, let’s visit the House of Allah in pursuit of His mercy and forgiveness.

About 30 minutes before Zhuhr Prayer, throngs of people toppled us like dominoes. I went through a really tough situation together with other pilgrims. Yet on my way back to the Ka`bah, I found a place with shady trees and a carpeted patio leading to a villa. The owner, an old man, stood watching all those who passed by; and I sat watching him. People would go to him and ask him for water. He would hurry and bring them cold water, so people would sincerely pray for him. I felt that their prayers were sincere and heartfelt, because I felt as thirsty as they were. Whenever the old man saw sick people, he would hasten on to the road and invite them in and provide them with food and a bed so that they would relax.

At first, I was embarrassed to ask for anything, but later I realized that I was thirsty, so I asked him for water. I had been in that patio for some time, and when I asked him for water, he realized that he had not offered me anything. He hastened on to the inside, and in addition to water, he brought me some fruit juice boxes. As I made my way back to the Ka`bah, I thought about this man: If a human being can be so merciful to those who came for Hajj, then how vast is the mercy of Almighty Allah for those pilgrims?

The Prophet is reported to have said, “The reward for a Hajj mabroor is nothing but Paradise” (Authenticated by Al-Albani).